YOU ARE HERE by MABI DAVID 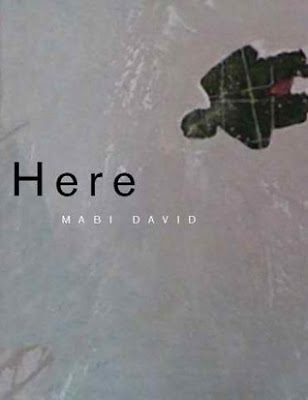 You Are Here by Mabi David

“to make way for a different order, a better city plan” starts the first installment of Mabi David’s historical pronouncement on the narratives of war alongside an ironic representation of metaphorical afterlives inherent in barracks, tunnels, the threatened town of Simacolong, and names of soldiers catapulted into a sea of anonymity. All these murky imprints speculate a kind of memorial “staging” that can relax if not totally blur the borders of the inside-outside dialectic confronting sites of memory such as, among other locations, heritage places. But how can one forget the horrors of the past if the literary and medial (following Astrid Erll’s argument) afterlives of the “traumatic past” continue to frame our consciousness? Everyday texts and the collective memory seem to articulate stories in pure abstractions.

In David’s sophomore collection You Are Here, the function of ‘here’ evokes the capacious memory of the speaker to unpack the narrow depictions of social history. The speaker sees characters, symbols and different sites of memory reminiscent of war, but this simplistic act of seeing provides a double-rider since remembering and forgetting widen the space of narration. This critical broadening of the identity and function of the here persona rather than an in-here persona, is an assurance that someone is potentially constructing a meaning, an experience, an idea. Instead of the persona articulating “As it was is as it should be” as the docile reality at large, such rational insight nonetheless makes his space of subsistence indisputably humane and inherent—that is, of the expressive contriving with the “I”- grounded self—simply because he does not merely narrate history but rather constructs his story or his material longing for the word: how it foregrounds memory space and identity. His rebuttal thus speaks of spatial signification in “Itinerary”, which I think is the book’s most engaging long lyric:

If as it was is as it should be,
what ashy leftover to leave as immutable script on this storied age,
by what eternizing rubble do we make handy our brief holiday tale?

It is made clear that memory is a re-visitation of familiar places, and what we have in “Itinerary” are catalogues of real historical places. These are the Malinta Tunnel and Fort Santiago enriching the pages of Philippine history books. The prescient point however is that David lends multiplicity of voices to her fluid and engaging subjects even before historical moments become statistics. One characteristic of this poetic contouring is the use of personal pronouns from Day One, through the narrating spatio-temporal self, to Day Seven. In short, David uses an equalizer to articulate her critical position of rethinking the past as a metaphor echoing the imperfect or what appears to be artistic, as it were, in a narrative problematizing what I call the eventness of memory sites.

David therefore confronts different speakers in order to depict the kind of reality or memory construct we share with one another. She uses the differing “I”, “you”, “we” and “he/she” to infuse a perspective, an interconnectedness, and certainly a remembrance not without spatial imagination. There is as well a locus of sensibility in David’s use of pronouns following the first person, in which case, writes National Artist Edith Tiempo on her poetic practice, “the ‘I’ is the practical part in contact with the everyday world, the ‘you’ is the dreamer part of the personality, and the ‘we’ the social conscience that sees the integration of the persona with the universal community.”

Moreover, the function of David’s pronouns seemingly parallels the complete erasure of war, hence these grammatical beings—WWII soldiers, truant visitors, black primitive birds—need to be ‘identified’ in order to be alluded to by context-minded artists. Lastly, the form or poetic structure problematizes the apparent dislocation of the speaker recapitulating the language of space after space—the condition of in-betweenness—where, in the context of reconciling personal narratives (inside) and the conventional historicity of extreme events (outside), this becomes the site of memory that actualizes a confrontation between the speaker being narrated and his narration of his material. History here is within the purview of the hovering yet confrontational “I”. Such displacement of the speaker in “Itinerary” creates tension or deliberate disclaiming of the space because if “there exists a border-line surface between such an inside and outside, this surface is painful on both sides,” and such claim would prove otherwise the hypothesis of Gaston Bachelard. So the pressure lies primarily in the subjective/spatial positioning of the speaker while narrating the historical material through his spectral presences and, of course, how his narration functions as whether to inspire his art or recount history as a project channeling prosthetic memory. We see after all a conscious form of history as having “a cruel prepositional gaze: it fixes you. It mounts you.”

The repetition of the schizoid ‘you’ in the “Repository” and “Soliloquy” series and the informed utterances of David’s Itinerary poems have demonstrated enough poetic dexterity and mastery of language, remarkable for their introspection that is reminiscent of familiar poetic voices: Anne Waldman, Linda Gregerson, or the Beat ‘outriders’ of the Jack Kerouac School of Disembodied Poetics at Naropa University. To wit, the technique of repetition builds up an idea that “meaning,” as Lyn Hejinian noted, “is set in motion, emended and extended.” You Are Here therefore is everything, refracted and remade by immortalizing its own mortal (poetic) struggle. Its often ambidextrous lyricism culminates on “a membrane of sightless intelligence.”

Lawdenmarc Decamora is a Best of the Net and Pushcart Prize-nominated writer with work published in 21 countries around the world. Earning an honourable mention on the 2018 special Love issue of Columbia Journal, Lawdenmarc holds an MFA in Creative Writing and is now an MA Literary and Cultural Studies candidate at the Ateneo de Manila University. He is the new Assistant Editor of the century-old UNITAS Journal while serving as a faculty researcher at the University of Santos Tomas. His full-length poetry book is set to come out in 2021 from Atmosphere Press. His work has appeared or is forthcoming in North Dakota Quarterly, The Seattle Review, The Common, Kyoto Review of Southeast Asia, Humanities Diliman, Cordite Poetry Review, Ilanot Review, Pedestal Magazine, Yellow Medicine Review, AAWW’s The Margins, CHA, Quarterly Literary Review Singapore, among other numerous places. He divides his time between Manila and Pampanga.