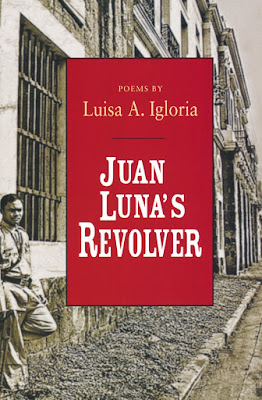 Opening his brown coat, Monkey shook a hundred jewels to the ground.

They shone, pomegranate seeds in moonlight. They pulled

me under their bright sleeves. Of course I wanted to taste.

These are the opening lines of ‘Journey to the West’ which serves as an introduction to draw the reader in to Juan Luna’s Revolver. The book was published in 2009 but I make no apology for returning to it now because I believe it marked an important moment in Igloria’s poetical development. The collection won the 2009 Ernest Sandeen Prize in Poetry and helped to establish Igloria, in the words of Sabina Murray, ‘as a singular and revelatory voice in American poetry’.

Poet and editor Luisa A. Igloria is Professor of Creative Writing and English at Old Dominion University. Originally from Baguio City in the Philippines, she now lives in Virginia.

Igloria is one of many who has made the journey to the west bringing with her unforgettable memories of the homeland that she left behind. It is clear from a reading of this volume of poems that, even in the southeastern U.S. state of Virginia, the history of her homeland is and always will be a part of her life.

In ‘Invocation’ she welcomes her Muse like a guest into her home: ‘I led him in, hung his smooth silks / next to rayons and rain shedders decaying in the closet’. This is a poem supercharged with generosity. The arrival of the Muse is like a cloudburst after a long period of drought and the vocabulary is luscious: ‘Who / would not plump cushions with her own hands, anoint / window ledges with yellow paste and cinnabar, all night / pour pistachios into each gaping bowl? All the saved copper / clanking in coffers I fed to the feast, all my silver.’

The attention to detail is mesmerising. This is first glimpsed in ‘Intimacy Deserves A Closer Look’ where Igloria describes everything that is to be seen on a typical night along the boulevards in Manila. In ‘Rainy Day,’ the first of a series of poems inspired by paintings, Igloria looks in detail at Gustave Caillebotte’s ‘Paris Street, Rainy Day’ where ‘nothing suggests the more familiar pell-mell scrambling / for any open doorway, awning, or bus stop.’ Caillebotte’s painting has been described as being ‘photo-realistic’ since it relates to his apparent interest in photography. Igloria focuses on all manner of detail such as the way rain looks when it falls on the pavement, the brittle ribs of silk umbrellas and ‘the tiny teardrop sheen of the woman’s earring’.

The title of the collection refers to the painter Juan Luna (1857-1899) who was among the cohort of Filipino artists and scholars who went to Europe in the 1800s to reflect upon problems arising from a corrupt colonial dispensation in the islands, the issue of cultural and linguistic identity, social reform and a burgeoning Filipino nationalism. In the title poem, Igloria reveals how Luna shot and killed his wife and his mother-in-law in Paris on account of his wife’s suspected infidelity. Later on, in the same poem, Igloria mentions another individual with the name of Juan Luna who was convicted of killing seven people in a massacre at Brown’s Chicken restaurant in Palatine, Chicago in 1993. This juxtaposition of two events in different time frames sets up an interesting tension between past and present events. For the record, the painter Juan Luna was pardoned ‘because of an obscure French law which explained / that native people, very primitive people, / have this tendency to run amok’.

Colonisation and cultural displacement are at the core of this collection. In ‘La Americana’ a young woman who is the offspring of an American GI and a Filipina woman, is ostracised for her blonde hair and fair complexion. Igloria then pitches this scene against Rembrandt’s portrait of a woman in a white bonnet which, after restoration, revealed a white collar beneath one made of fur that had probably been added in the 18th century. Igloria concludes:

about both girls, the one in the portrait

and the other who could have served as well

as Rembrandt’s model, about the little spot

of color along the cheekbones and the other

The way we view others and are influenced by our bias towards their backgrounds is a prominent theme in this collection as is the way it feels to be held in close scrutiny. As Igloria pointed out in an interview she did for Lantern Review Blog (March 4, 2010): ‘We might think we know everything there is to know about something. But poetry reminds us of the mystery that remains.’

In ‘Worth’ Igloria poses the question ‘What is to be worthy or un- / worthy of another?’ and then ponders another: ‘Is this then a parable / about virtue, how at the end of suffering / there is the consolation of art?’ Her compassion comes through clearly in the concluding lines: ‘The eye cleaves harder to any picture / shaded with the ink of loss.’

Igloria’s attention to detail comes to the fore again in ‘Letras y Figuras’ where she describes Marché’s ‘La rue de l’Escolta á Manille’ (1886) in terms of its perspective:

…..the church is the point before

against the scattering clouds – the obvious sermon

from which all figures in the foreground have for the moment

‘Your Hand In My Side’ addresses the subject of belief and unbelief and all those questions that get in the way of our understanding ‘like what was the name of Lot’s / wife anyway, and why did she look back?’…’And then there is Thomas, demanding empirical proof, / wanting to poke and probe the punctured flesh; / to measure the distances travelled by the body / in its fall and resuscitation.’ In this collection, Igloria is not afraid to ‘struggle with the unruly chaos of matter and belief.’

In ‘Postcards from the White City’ the sonnet sequence oscillates in place and time between the World Fair held in Missouri in 1904, visits to the Smithsonian Institute in 2002, the Museum of Science and Industry in the White City of Chicago in 2003 and white nights spent in St. Petersburg in the summer of 2003.

The Louisiana Purchase Exposition, informally known as the St. Louis World’s Fair, was an international exposition whose purpose was, in the words of David Francis, the chief executive, ‘to demonstrate to visitors that human history has reached its apotheosis in Forest Park.’ Eleven hundred indigenous Filipinos were transported from their homeland and, along with Ainu, Native American Indians and pygmies, used as live exhibits to illustrate the development of nations from savagery to civilisation and to promote America’s role as a new imperial power. Many of the Filipinos  were taken from the northern Cordillera region in the Philippines which is where Igloria grew up. Igloria’s imagery of light and dark, as she herself casts light on this dark period of history, is present in these sonnets where we read of ‘street lamps [that] dispute nocturnal authority,’ ‘finches that once scattered in a panic of light,’ and ‘the white glare of buildings’. There are images of bodies and body parts and, in during the white night season in St. Petersburg, when the sun never fully sets and the sky stays bright throughout the night, another kind of history is revisited at the Wall Murals Historic Monument and a former Russian residence of the imperial family.

The American idea of taming savagery is succinctly portrayed in ‘Mrs Wilkin Teaches an Igorot the Cakewalk’, a poem inspired by a photograph taken from the archives of the Missouri Historical Society dating from 1904. The cakewalk was developed from the ‘prize walks’ held in the mid-19th century, generally at get-togethers on black slave plantations before and after emancipation in the Southern United States:

and one extended arm to harness

the metronome at my wrist. Oh I could smell

fear and loneliness on the margins of the constructed

gardens. Under the trellis, the shadow of my dying

took up a gong and danced. I was a mystery applauded

In this collection Igloria invites us to take a hard look at history, to delve beneath the surface, to learn from the mistakes of the past and to be more circumspect in our practice of everyday life. She takes us on a journey that moves between the Philippines and the United States but it could be a journey undertaken by anyone anywhere who has experienced exile, prejudice and loss.