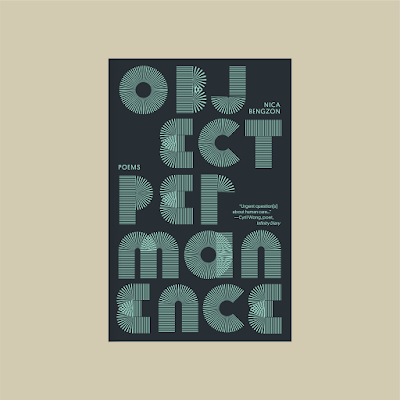 N.B.: This "review" is written concurrent with a reading through the book from first to last page.

I'm a fan of finding poetry in technical language. It's part of my poetics belief that one need not make things up to create poems--the poet simply needs to be lucid enough to see the poetry that already exists around us. So I was pleasantly surprised that this seems to be the, or one, path for Nica Bengzon's debut poetry collection, OBJECT PERMANENCE.

The opening poem, "In the Event of a Catastrophe," begins to read like standard instructions given to medical staff as they deal with emergencies, e.g. the first page:

But when the reader gets to Page 5 to read about what happens next after victims have been sorted among those not needing immediate assistance to those needing help right away, the reader is faced with

Who do you go to first?

Also, the next page instructs, "Triage with the head, not the heart." Is this ... possible?

And when the reader gets to Page 10 and sees again (the second time at this point) the phrase "walking wounded" as a standard for assessing the patient, this reader is momentarily yanked out from the book's psychological space to pause and consider humanity in general, that is, that so many of us not having medical issues are nonetheless "walking wounded." To live is, among other things, to hurt. I could go on philosophizing but, more to the point of conducting a review, let me just note the deftness with which Bengzon inserts terminology that seems applicable to particular (medical) instances but may have larger reach; the effect enhances the intimacy of reading and, surely, that is one way to enhance the poetry experience. (I should note that I don't know if "walking wounded" is true medical terminology but even if not the phrase is presented as such.)

Terminology and technical terms have an understated effect, relative to language aspiring to the poetic. This collection is also effective for its trust in the reader. The poet trusts that readers can discern on their own the poetic resonance of a seemingly bald-faced statement like:

Patients tagged BLACK can be covered, if necessary, and left in place.

This clinical, if you will, linguistic approach also serves to magnify the effect when the poet does choose to discernibly insert a more lyrical and personal presence:

Ask any doctor worth their salt for the story of how it is to watch someone die. // Have them describe to you the cutting of the power line somewhere inside the skull, the cessation of electric currents in the region. The veil being drawn over the statue. Water draining away.

At this point, I have written-responded per the above as I finished reading the first poem, "In the Event of a Catastrophe," which is to say the book opens brilliantly. The first poem is a stellar threshold for the reader to engage on the way to the rest of the poems. And the rest live up to the first poem's implications, specifically, where health becomes the root from which to meditate on both the body and spirit. I am particularly taken by "The Law of Gravity" that makes me (among other things) react with an affirming "Oh yes!" at the idea of language's hold as gravity. I excerpt the first--and amazing--stanza here: 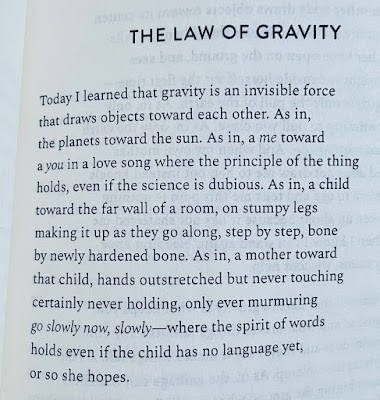 I said the parenthetical "among other things" above because the poem also ends unexpectedly with a swerve I admire even as it cuts me--the presented rationale for letting "the child fall" (for more, I encourage you to read the poem, this book, yourself).

As I continue reading through the collection, I also notice something admirable (and that other poets might consider as my memory interrupts my reading. But let me go on...). I notice that Bengzon pushes her poems--i.e., no easy-to-achieve or predictable endings for her poems. An example is "The Law of Gravity," which I mention because the poem could have ended with the first stanza that I excerpt above. Instead, the poem continues on for two more stanzas. A similar thing happens in other poems like "The Law of Conservation" which could have ended appropriately with its 5th stanza that ends, "When we die, our bodies / become the grass, and the antelope eats the grass." That's a good ending but the poem continues on to end equally effectively with "Why split hairs about form?" In extending the length of the poems, the poet increases the risk of unnecessary words that may not be as strong as the poems' beginnings, but Bengzon only widens the narrative expanse to make more fulsome poems.

[Insert 10-minute pause as I try but fail

to remember which poet once called short

poems the refuge of those who can't write

Such ability to write effective longer, then long poems, are set to good use in several poems. Later in the collection, we remain interested as we (continue to) read through "A Miracle Story," "All Things Bright and Beautiful" and "Today We Are Canceling the Apocalypse." A poem like "Scattering" easily shows how the poem's length is earned: "Scattering" is a delicate gem; it ever teeters on fraughtness without giving in to it because of a simmering sweetness among its lines (as delineated by sibling love).

Last but not least, OBJECT PERMANENCE is a book clearly written not just by a writer but by a reader. On reads or senses medical or scientific treatises but also books on religion and by spiritual writers (some of whom are named like Richard Siken). Bengzon takes it all into a stew spiced by both head and heart and gives back generously with poems that turn reading into a hugely satisfactory experience. This reader is grateful--this book is recommended.

Eileen R. Tabios has released over 60 collections of poetry, fiction, essays, and experimental biographies from publishers in 10 countries and cyberspace. In Spring 2021, she released her first novel DoveLion: A Fairy Tale for Our Times. Her 2020 books include a short story collection, PAGPAG: The Dictator’s Aftermath in the Diaspora; a poetry collection, The In(ter)vention of the Hay(na)ku: Selected Tercets 1996-2019; and her third bilingual edition (English/Thai), INCULPATORY EVIDENCE: Covid-19 Poems. Her body of work includes invention of the hay(na)ku, a 21st century diasporic poetic form, and the MDR Poetry Generator that can create poems totaling theoretical infinity. Translated into 11 languages, she also has edited, co-edited or conceptualized 15 anthologies of poetry, fiction and essays. Her writing and editing works have received recognition through awards, grants and residencies. More information is at http://eileenrtabios.com