PEIRCE/MARX SPECULATIONS ON EXCHANGES BETWEEN PRAGMATISM AND MARXISM by E. SAN JUAN, JR. 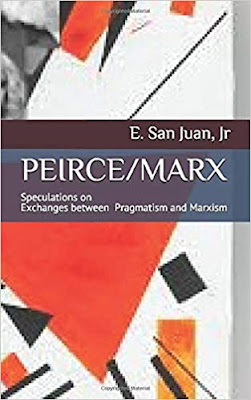 Peirce/Marx:  Speculations on Exchanges between Pragmatism and Marxism by E. San Juan, Jr.

The title Peirce/Marx yokes two philosophers -- not with a dash but a slash -- hinting at the strategy of the monograph by E. San Juan, Jr. The subtitle reinforces this with "Speculations between Pragmatism and Marxism." Also, calling his work a "thought experiment" shows awareness that his findings will be challenged or modified by subsequent critics, as he himself does to some of his sources.

San Juan attributes the awakening of his historical sensibility to the war in Indochina as part of the Cold War against China and international communism. The U.S. used its bases in the Philippines to launch its invasion of Vietnam, using counterinsurgency tactics (burning villages, executing civilians) to subjugate and colonize the Philippines. Mark Twain protested against the U.S. violence in the Philippines. So did the philosopher William James against the atrocities in Vietnam displaying his pragmatism, but there is no mention of Charles Sanders Peirce sharing the same sentiment.

San Juan offers this absence as "pretext for this speculative exercise." Can Peirce's condemnation be inferred from his other theories that concur with Marx's, for instance, on the nature of reality? This is what San Juan undertakes in the monograph, searching for "creative transaction" on the agreement between Peirce and Marx on the methodology of obtaining knowledge (40).

San Juan echoes the unacknowledge acolade of Peirce as the "American Aristotle," claiming that the philosopher's ideas have not been tested as "a strategic guide to wide-ranging sociopolitical action." (9) San Juan, however, does some of the testing by juxtaposing the convergences between Peirce's pragmatism and Marx's ideology. In effect, San Juan orchestrates a dialogue between the two but, despite the evidence he marshalls, he raises the white flag in mock surrended shielding the speculative nature of his project. In this regard, he is overly cautious and self-deprecating, demeaning his project with a bit of ironic humor as "a fruiful chabitation if not synergestic." (19)

To clear the path for his synergesis, San Juan targets what he calls the misreadings and misconstruals of Peirce and Marx. Even William James gets chastised for offering a cheap psychological fix: "Ideas become true just so far as they help us get into satisfactory relations with other parts of our experience." San Juan calls this "a feel-good recipe for mass consumption." (27) The Soviet authorities, however, gets the full brunt of San Juan's critique for "delimiting pragmatism as subjective idealism and obscurantism." (33) He highlights the Soviets' judgment that "pragmatism has given way to neo- positivism and religion as the dominant influence on the spiritual life of the United States." (35)

After dealing with many of the misconstruals of both Peirce and Marx, San Juan lays out the parallels or analogues between Peircian pragmatism and Marxism, claiming that both are universally applicable in analyzing class struggle, the contradictions of social formations, and the unpredictable trajectory of movements and revolutions. The Arab Spring is a case in point. A few of the applications escape me, for instance, "All men are mortal, but mortality is not the same for all men." (56) I suppose it means that not all men die the same way, or that some men believe that death is not an end but a transformation to another life.

In as much as the monograph is an "exploratory survey" of the thinkings of Peirce, Marx, and San Juan (one must add), I find myself gleaning from the bountiful harvest of thoughts, holding on to what I can consume. I did wince a bit when San Juan calls Heidegger "fashionable." (I spent a sabbatical in Germany studying Heidegger's phenomenology). In journalistic parlance, a few takeaways from the monograph include the historicity of knowledge and of objective reality as being independent of consciousness, the link between dialectics of Marx and Hegel, and Peirce's modification of the Cartesian requirements for a proposition -- clear and distinct -- by adding "meaningful" as a third criterion. One may of course quibble that it is redundant since meaning, like beauty, lies in the eye of the beholder. The meaning an author intends may no be what the reader gets. We do need a community of truth-seekers to agree on the definitive meaning of the Cartesian axiom "I think, therefore I am."

In short, San Juan's monograph for me serves as an invaluable primer to pragmatism and Marxism in one's enduring quest for knowledge.