ODE TO THE HEART SMALLER THAN A PENCIL ERASER by LUISA A. IGLORIA 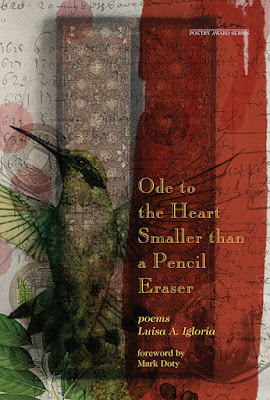 ODE TO THE HEART SMALLER THAN A PENCIL ERASER by Luisa A. Igloria

Poet and editor Luisa A. Igloria is Professor of Creative Writing and English at Old Dominion University. Originally from Baguio City in the Philippines, she now lives in Virginia. Ode to the Heart Smaller than a Pencil Eraser won the 2014 May Swenson Poetry Award.

Traditionally, an ode is a song of praise. It is a type of lyrical stanza, an elaborately structured poem praising or glorifying an event or individual, describing nature intellectually as well as emotionally. Igloria fulfils this definition completely throughout this dazzling collection that is so engaged with the wonders of the natural world.

Having said that, this is so much more than a book of very fine poetry. It is also an assemblage of extraordinary facts ranging from Mexican free-tailed bats that ‘eat two hundred times their weight / in insects before returning to their roosts,’ to the story of ‘Unsinkable Molly B / the cow that jumped a slaughterhouse gate and fled / authorities by swimming across the Missouri river’ and a reference to the London Beer Flood of 1814 ‘when 323,000 imperial gallons / of beer burst out of their vats at the Meux / & Company Brewery.’

Six poems bear the title ‘Landscape’ which not only reflects Igloria’s sensitive receptivity to nature and art but also offers up both real and imagined landscapes of amazing beauty.

Birds are a prominent feature in these landscapes: ‘a cardinal that flickers like a pilot light,’ ‘white-throated sparrows,’ ‘drab-coated vireos,’ and ‘tiger and spicebush swallowtails’ to name but a few. There is a quotation from Chaucer’s Parlement of Foulys and a reference to Attar Farid Ud Din’s Persian poem, The Conference of Birds. Even one of her poems ‘roosts awhile’ in Night Heron, Ascending before leaving.

The rather arresting title of the collection refers to the hummingbird. In Anniversary we read how it ‘revved the throttle on its small engine’ and in the title poem Igloria reflects upon:

A heart the size of a pencil eraser, beating ten

times a second, hammering faster than we could hear.

A heart that fuels flights more than five

hundred miles without stopping to rest.

Hot heart that kisses at least a thousand flowers a day

but cold, slides into a torpor from which it might no longer  rouse.

Music is never far from Igloria’s lines. There are hints in the titles, (‘With Feeling,’ ‘A Single Falling Note Above,’ ‘Improvisations,’ and ‘Unending Lyric’) and there is a tender rhythmic lyricism in her choice of words. In Unending Lyric Igloria, who started to read music at the age of three and continued with lessons for the next 12 years, writes:

rote-signing, then followed the pencil across the staff:

nimbus of release, though brief and incommensurate.

The lush vocabulary, often taking the form of descriptions of exotic fruit, (‘a ripe fig,’ ‘the fleshy globe of a persimmon,’ ‘reptile-skinned melons,’ and ‘the purple rind of a grenadilla’) adds all the more to her phrasing.

Notwithstanding the abundant beauty that is to be found in this collection, Igloria does not shy away from writing about impoverishment and the difficulties immigrants face in making ends meet. Poems such as ‘Landscape With An End And A Beginning,’ ‘Landscape With Red Boots And Branch Of Dead Cherry,’ and ‘Certified’ bristle with ‘a wall of spears’.

‘Certified,’ one of several persona poems to be found in the book, is also a poem that operates on the basis of word association which is based chiefly on opposing forces: words associated with heat and then coolness, circles and frames, food and hunger, the switchback of the swerve and the weight of the pendulum, the child asleep and the child awake, the clock that ticks and the clock that stops, the train hurtling down the track and then coming back, the fingers loosening the shirt buttons ‘a little or a lot’. The poem speaks of the lives of immigrants who work for the service of others reaping very little or no reward.

Igloria is equally at home writing epistolary poems and ghazals. The first ghazal in the collection, Derecho Ghazal uses the image of the derecho to set in motion our instinct for survival when we are faced with the terrible forces of nature.

‘Dumbwaiter’ puts down the mighty from their seat while ‘Spangled’ clears up some prejudicial misconceptions:

You think you know but you don’t know

shit about what we’ve been through

You think we got here only yesterday, but we jumped ship

long before that voyage and landed in the bayou.

There is humour too in some of the poems. The epistolary poems (‘Letter to Providence,’ Letter to Arrhythmia’ and ‘Letter to Levity’) take the form of brief, sardonic reflections. Other poems such as ‘In A Hotel Lobby, Near Midnight’ and‘Imperfect Ode’ with its telling last line: ‘Give thanks for our telling imperfection’ sparkle with wit and invention.

This is a collection to treasure. It is a pleasure to read and to go on reading. It is Igloria at her very best.