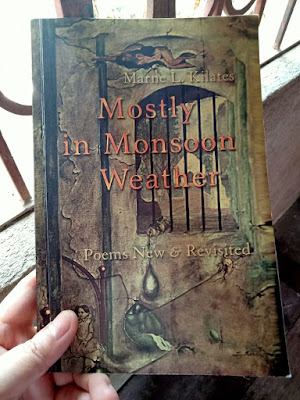 (University of the Philippines Press, 2007)

Most of the poems in this collection placed oppressive forces and natural disasters at the center of ridicule, and this intention was accompanied by a desire to celebrate what remains in the place and in a people though eternally baffled or spiritually shattered. The poet, endowed with a voice at once intelligent and engrossed and humorous, wasted no time, succeeded in pushing the agency of poetic forms forward and further, until it reaches the point of questioning our sense of country.

Kilates's way with words is not an end in itself, it is a means for our own pondering. As we part the grass blades of our collective consciousness, what is there in the clearing? Is it a puddle mirroring our reluctance with our roots? Or a piece of dry earth abandoned by our age-old masters, one we allowed to be that way long after liberation? His poetry will surely help us find out. Image, narrative, insight, impact—read each of his poems, and you'll find these elements favorably playing their roles.

When I was halfway through the book, I discovered that the longer poems are his stronger pieces (not to say that brevity impedes what demands linguistic elevation or profundity of thought). Through these longer poems, we are drawn to a place, we walk willfully and scan with the imagination the peripheries, without losing our concentration on why we are there in the first place: the examination of townsfolk's psyche. Such poems are a good contribution to Philippine poetry in English. A personal favorite among these poems is "The Log Pond", which possessed an epic quality, a muscular kind of lyricism in the likes of Cirilo Bautista's "Sunlight on Broken Stones". Read this poem aloud and you will be possessed by a Renaissance man, trusting in the greatness of the human spirit even when constantly confronted by wreckage.

Poems from Mostly in Monsoon Weather are available HERE. Here's an excerpt:

In the grey hour, in the humid hour,

When the sky glints

When not a leaf quivers;

From the brooding window,

*****
Since 2016, Aloysiusi Polintan has worked as a Senior High School Principal in Divina Pastora College. He started scribbling poems and essays when he was 17 years old. These poems are still kept in a notebook and wait to be revised for future publication. This notebook will be revived and will give birth to language already "lived." That is why his blog is named "Renaissance of a Notebook," a blog of poems, personal and academic essays, and flash movie reviews. His book reviews, which are published and featured in The Halo-Halo Review and Galatea Resurrects, are also to be found on the blog, under the series title "Mesmerized." He believes that the ability to judge or critique a literary piece starts with the reader's being moved and mesmerized by the artful arrangement of words articulating some longing for freedom and individuality. He's now working on a manuscript of 50 poems, with a working title of Brittle Sounds.
Posted by EILEEN at 8:54 AM