Foreword to QUOTES OF LIFE by RADHEY SHIAM 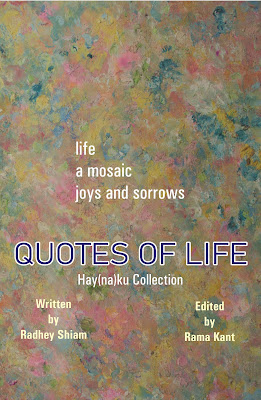 The reminiscence of poetry emanates from the inception of our age-old civilization: from oral chanting to epics writings. The essence of poetry has been imprinted in our ancient Vedic literature. Poetry inspires to unfold the sublime spiritual essence of the basic building block of creation, the living and the non-living, since time immemorial. The literature has been considered as the blueprint of social reformation. From writing an epic poem to one-word haiku (‘Tundra’ by Cor van den Heuvel) has been a long journey in the history of poetry writing.

The philosophy of haiku writing is the exploration of vastness in brevity. Jack Spicer aptly writes, “A really perfect poem has an infinitely small vocabulary.” Aram Saroyan's “lighght” may look like a felicitous typo, but the poem was not the result of an accident. There are different forms of poetry that evolved through the civilization of human histories such as Sonnet, Haiku, Villanelle, Sestina, Acrostic, Ekphrastic, Concrete, or visual Poetry, Elegy, Epigram Limerick, Ballad, Tanka, Ode, Free verse and others.

Hay(na)ku , pronounced ai-na-koo, is a poetic form invented by poet Eileen Tabios in 2003. The name was proposed by Vince Gotera. Eileen Tabios initially called the form “the Pinoy Haiku”. Hay(na)ku is a six-word tercet  (a 3-line poem) with one word in the first line, two words in the second, and three words in the third, totaling  six words.  The words can be shorter or longer as desired by the poet. Hence it is not the conventional short/long/short (s/l/s) style of normal haiku pattern. Poem with words counted in reverse order is known as reverse hay(na)ku. Chained hay(na)ku  or sequence hay(na)ku  comprises more than one tercet .

Radhey  Shiam (1922-2015) is the first Indian to write hay(na)ku  and he is featured in The First Hay(na)ku  Anthology, Co-Edited by Jean Vengua and Mark Young in 2005. He had written haiku in Hindi, Sanskrit, Awadhi, English and Urdu languages. Later on, his son, Rama Kant, published Radhey Shiam’s collections  ‘Haiku Pahelyiaan’ in Hindi in two volumes along with two collection of verse in  English: ‘Song of Life’ and ‘The Book of Life’.

“Quotes of Life” by Radhey Shiam is the first collection of hay(na)ku in Indian English literature. Some of his poems radiate zen-feeling, as often seen in the classical haiku with the basic elements of lightness (karumi), mystery (yugen)  and becomingness (kokora).

The poems are arranged alphabetically from ‘a’ to ‘z’: the first line of each poem as the title. Like haiku, the poems are written in lowercase. Words are arranged with counting order to express meaning and to create images within the compressed syntax.

Occasionally poems are written in three lines with the arrangement of words in the style of prosaic expression: “peace/ is wisdom/ wisdom is delight.”  His poems are sort of proverbs and are often composed in symbolic styles. Interestingly Radhey defines: “proverbs/ are ornaments/ of the language.” He has also infused art of humorous when he writes: “grammar/ is makeup/ of lady language.” At times, to render musicality, the poet creates word-phrases like ‘pearls and pebbles’, ‘power and pelf’ etc. Sometimes his poems are characterized by resonance with the repetition of sound:“quarrel/ a barrel/ full of trouble”; “painting/ singing hues/ and dancing forms.”

He has depicted vividness with the assimilation of experience and understanding.  Like haiku, Radhey tries to implant  compare and contrast in kyo(na)ku  by juxtaposing the  images  in an artful way: “words/ without action/ birds without wings.” ; intention/ a seed/ person a tree.” His poetic spells have been reflected with exotic beauty: “compassion/ love flows/ in human valley”; “ethics/a passenger/on moral train.” The skill of poetic exploration has been the cornerstone of Radhey’s writing. At places he allegorically paints his poetic thought:

Logic and scientific flavours are often seen in his composition: “cause/ is bound/ to yield result.” He enjoys the spirit of freedom and infuses the political awareness: “censorship/ is gallows/ to individual freedom.” His writings embody the light of social reform and signify the socio-religious perspectives: “charity/ is not/ rich man’s largesse”; “donation/ a sin/ in God’s name”; “spirituality/ is practical/ not preaching.”

How beautifully the poet defines the essence of education! It speaks about his inner impulse of a silent social reformer.

He urges for fostering an ideal society by imbibing better human character. Symbolizing the traditional values of family life, and the role of woman, in particular, he pens: “parents/ are lessons/ to their children”; “home/ is made/ by woman’s wisdom” and “child/ is history/ of the mother.” His metaphorical expression interlaced with juxtaposition is one of the brilliant poetic creations: “bribe/ is charcoal/ blacken the face”; “preaching/ without action/ a barren land.”

The democratic feeling has been reflected through his poem: “journalism/ a teacher/ to monitor society.”  He urges all to refrain from superstitious beliefs: “spirituality/ looking inward/ but no rituals”; “ritual/ is skin/ of the fruit.”

Solemnly he wishes to face the challenges of life, “strength/ is life/ weakness is death” and to enlighten the essence of life like a divine flower:

He discovers God in the serene nature: “God/ is nature/ nature is God.” He explores the value of infinity when he envisages: “imagination/ a bird/ in endless sky.”

Artfully he visualises the beautiful saying, “Life is not the bed of roses”, in a novel way: “honesty/ makes life/ bed of roses.” He values the goodness of human beings. It reminds me of Shakespeare’s line, ‘a rose by any other name would smell as sweet.’

The sense of optimism is manifested through a beautiful poem: “mistakes/ wonderful opportunities/ to learn more.”Radhey’s poem on children is a thought-provoking one: “child/ smiles sweet/ home becomes poetry.”  His writings are embedded with zen-feeling: “bless/ a bird/ in cheerful sky” and “heaven/ is within/ not in cosmos.” He discovers soul in the silence of music: “silence/ is music/ of the soul.”

Radhey Shiam is a man of humane embellishment with spiritualism, compassion and divinity. He longs for universal brotherhood and oneness: “beauty/ is song/ of the soul”; “humanity/ is real / mother of spirituality”; “oneness/ is recognition/ of universal soul”; “devotion/ is harmony/ with the universe” and “silence/ wordless wonder/ a true bliss.”

He has coined many thoughtful hay(na)ku which remain as fresh as pristine water. He inspires with his appealing words: “success/ is ability/ to endure failures”; “thought/ with action/ way to success”; “wisdom/ divine fragrance/ from silence flower.” He believes in purity and practicality and thus says, “truth/ a flame/ has no shadow”; “yesterday/ never returns/ to greet you” and “success/ a rose/ with failure thorns.”

Radhey Shiam has valued the Indian philosophy and the enriched aesthetic tradition:

Radhey Shiam has rendered profundity of inner thoughts into poetry. His poems  reflect the elegant light of layers of wisdom. The literal allusions and brilliance will continue to endure through his profound aphoristic expressions. The collection, ‘Quotes of Life’ is a lexicon of human perspective with contemporary values.

Pravat Kumar Padhy obtained his Masters of Science and Technology and a Ph.D from Indian Institute of Technology, ISM Dhanbad. His poems received many awards, including UNESCO International Year Award of Water Co-operation and IAFOR Vladimir Devide Haiku Award. He is nominated to the prestigious panel of ‘The Touchstone Awards for Individual Poems’. He is the Editor, Haibun, Haiga, and Visual Haiku of the Journal, Under the Basho.