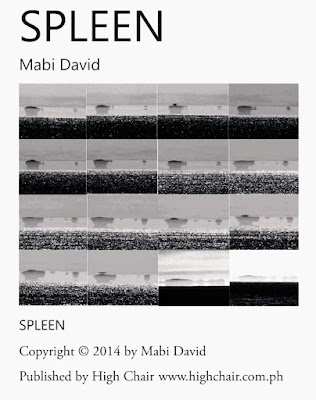 In the beginning, there was the word. It sits quietly, as if the act has the alternative capacity of speaking and screaming. And it breaks into utterances and punctuations because it can no longer hold itself. The soul finds delight in bursting forth. How does the event of bursting sound within a ventricle of ultimately quiet passion? The word breaks away. It has a mouth eternally zipped, and a crevice is finally seen, this must be hope and courage. The canvas, the bowl, the table, the wind vane, the postscript, the provisions, the construction site, all these are fragments of a soulful word. When everything looks all right, the word creeps through the chip, the hole, the curtain slightly drawn to show the newness of mornings, the lips always ready to devour after the desire. And there is that untimely silence, when the reader expects a certain kind of ecstasy from the cacophony of letters and the predictability of enjambments. But the invisible soul decides it that way. And it is more deafening. The irony of covering the ears while waiting for occasional bursting. One hopes it will not reduce into the origin, into its ancestry, may it resound in the periphery. Simple and simple, but stupendous and real.

Take the plant boxes off the ledge. While there unhook
the chimes. Pluck the peals from their throats to a thunk.
Strip the swivel from the weather vane. Climb down
without looking. Fold the limbs with lights. Steal creaks
from the floorboards. Blind windows. Sheathe the galaxies.

We make as fancy takes us,
sweethearts of the silver
lining we shine back to
our sugar-daddy sun,
he dazzles like arson,
and when the wind comes
slick and soft spoken
oh he fingers our shivers,
concubine to his kinks,
by the thread we hang
in stitches, we squeal
cellophane glissando,
slender spasms we go
white like froth, we
orgasm ornaments
by your window and
your suburban sorrow, god,
must you blight our delight?