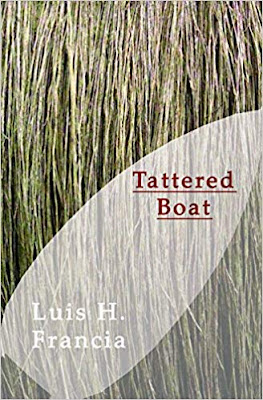 Luis H. Francia’s stamp on the literary world is legendary among Filipino-Americans. He is recognized and celebrated as a poet, writer and academic who battled the odds — and won — in an unforgiving U.S. literary industry that is often full of itself, condescending even to its own shadow. He persevered during a time when racism ironically inspired a generation of foreign-born poets to write hard, proving themselves equally good, equally worthy. His scholarship, teaching and editorship have elevated the works of many Asian American and Filipino American writers in English.

The eye of the critic appears in many poems in his collection Tattered Boat. For instance, readers infected with and on the mend from Catholicism would find solace in sharp critique evident in “Dream of the Ascetic” and “Savior of No One.” Deeply mired in soul wounds left open, the poet contemplates meaning and “the promise of oblivion“ in “Words, Words, Words.”

Some poems in Tattered Boat even made me feel inadequate, as if I needed to brush up on the history of Western colonialism and religious conquest simply to keep up, retraumatizing myself in the process. Others provided glimpses into the poet’s struggles with acculturation, pondering “How many masks do you wear?” in order to face “All the quarrels with America.”

But Tattered Boat also made me consider other questions, like, Who is the poet?  I write a review of Luis H. Francia’s Tattered Boat, and it is from this perch that I look intently for signs of the Filipino. In this collection, Francia’s social identity and location are not always readily apparent.

One could argue that anyone could write the poems in Tattered Boat. The metaphors, point of view, vernacular and voice are not distinct or exceptional enough to be discernible from what one would expect from whitebread English-language poets.

In this volume, he leaves ethnic crumbs for us to follow here and there. However, he never fully takes our hand to show us the Filipinian charm of his Ate’s cotillion. He pays homage to Carlos Bulosan in an elegy to trees, but doesn’t lead us to groves of Narra or Balete. He mentions and footnotes the dama de noche, yet stops short of invoking its full power in the Filipino imagination.

Were it any other poet but Francia, one might even wonder if it’s an act of survival: the poet choosing to brush his verses clean of racial and ethnic allegories, because brownness, and the mind and tongue that it came with were never good enough to all the relevant publishers and critics.

Yet, in the critical lens of decentering Whiteness, why do I expect an immigrant writer to make art primarily from a cultural perspective? Don’t we all bleed the same blood? Aren’t we all part of the human race?

Perhaps because so few ascend to the literary status that Francia occupies, U.S.-based brown Filipino readers like me expect the poet to write those lines that only he can write. Verses that grow out of pliant bamboo, drenched with indigenous blood, surrounded by a coastal forest of coconut trees. Verses that portray the newcomer’s “ambivalent joys” in this “slice of the American pie.” Verses that not only deconstruct the colonizer’s religious baggage, but displays the heaviness of centuries of self-flagellation, guilt and shame permeate the deep recesses of the Filipino animus.

Reading poetry is akin to remembering one’s dreams: how does a poem make you feel? What parts of your consciousness are activated?

Maileen Hamto was born and raised in Manila, Philippines during Martial Law.  She was 10 years old during the first People Power Revolution (Edsa 1) that overthrew the dictator. A highlight of her fourth-grade experience is memorizing the Preamble to the country’s newly drafted Constitution. She attended Esteban Abada High School in working-class Sampaloc. Her family arrived to the U.S. in the 1990s by virtue of their matriarch’s career in nursing. And so began the lifelong journey toward decolonization, toward making sense of racial stratification in the U.S., always sharpening the proverbial bolo knives.

(She could include details about three academic degrees earned in the U.S. and how she pays the bills, but there’s LinkedIn for that.)