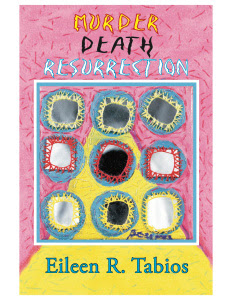 A gift of a Journal. A Poem with over a thousand lines. A gift published as a book: MURDER DEATH RESURRECTION (MDR) by Eileen R. Tabios.

Eileen’s promise: You can randomly choose however many lines and put them together to form a new poem. And if the poet is successful, the new poem will be beautiful!

In another journal, I did just this and I was surprised that this promise is true.  I wrote about it HERE. Then I decided to begin a new journal for writing a one-page entry every day in response to a randomly chosen poetic line; I planned to do a free-write following what feelings, images, memories, stories the words evoke.

For three months, before going to bed, I made a date with Poetry.

You should know that I recently retired after more than two decades of teaching Ethnic Studies at a state university in California. After several published books, journal articles, edited anthologies, and chapter contributions to other people’s books, I declared myself free from the obligatory academic language, citations, and footnotes and such.

I wasn’t going to write anymore.  (In any case, who reads for length these days?)

But when Poetry calls, I listen and pay attention.

I invite you, dear reader, to see what this poetic entanglement has evoked for me…that,  hopefully, evokes something Beautiful for you as well.

Note: MDR contains a database of 1,167 poetry lines. Each entry below is sparked off one of its (numbered and italicized) lines:

They once put my people in a zoo. It was called the 1906 St. Louis World’s Fair. They brought 3,000 individuals from various tribes in the Philippines and put them in an enclosed pen and made them perform rituals and dances to entertain the white fair goers. They had to show how they killed their dogs and cook and eat them. They showed the men jousting and showing off their brutal strength. They dressed some of them in American suit and tie to show off the civilized version and then had them take photographs with the goers. Just like a selfie today.

After the zoo closed and cages were opened, some of the tribes were taken to other traveling fairs. It was still ok to show off bizarre and strange creatures then. Some went home.

In Marlon Roldan’s Bontoc Eulogy, he created a story where one of the men supposedly fell off the ferris wheel and died and his body was never recovered. He imagined it being taken to a museum to be dissected and studied. It could be true, you know.

But we forgot about the Native American William Jones who became an anthropologist and came to work for the Chicago Field Museum and then assigned to do field work in the Philippines. He encountered the headhunting tribes. He didn’t go as an Indian; he came off as an imperial emissary of anthropology (this was before Renato Rosaldo turned the discipline on its head) and his imperial ways weren’t received well by the natives so they took his head.

Why do I remember these stories now? The world itself feels like a zoo now. Cages are far from being retired.

1,022   I forgot how to feel the Milky Way expand simply because, upon my waist, you placed your palm.

I’ve often wondered about the meditating type who could see the universe simply by closing their eyes and concentrating deeply on the breath and the third eye. They report seeing a point of light surrounded by flashes of color – blues, reds, yellows, greens, purple. They say they feel energy flow up and down the spine. Sometimes they report that what they see with eyes closed in deep meditation is the same as what astronomers describe when they point their telescopes in the sky.

Scientists also say that we are made of stars and stardust. Literally. So I’ve been learning to tune in more closely to this scientific fact that heretofore was only the subject of philosophy and esoteric discourse.

I long to feel a hand upon my waist and know that it is the universe that is embracing me.

In the Taoist healing system, I learn that we are energy and consciousness. The energy of the heaven, earth, sun, thunder, wind, water, mountain, and lake – is all in my breath that enters the bai hui at the top of my head and the bubbling well at the sole of my feet and collects in the dantian, my belly.

This is also the universe breathing.

159      I forgot how pronouns confused me. I forgot the “she” evolving into an “I” and then back again, flustered before your gaze.

I immediately thought of the tyranny of the English language as this gaze that disciplines. In my indigenous tongue, gender is neutral. He or she translates to Siya or Sila (they/them). Imagine how confusing it is to constantly interchange he/she/they especially in today’s mandate to make sure we know people’s preferred pronouns.

It is hard for me to talk about “I” so I never know what to say when I am asked: what do you do? Who are you? I don’t have a problem writing about my ideas, talking story, meditating but in a circle where we may be asked to state credentials, I get timid. Is it because I get flustered by this Gaze?

I do not have an “I” without You. Whatever it is that I have done to fill up a 25-page academic resume is just an obligation to institutional bureaucracy.

What is this reticence? Is it really oppositional and, therefore, liberating or is it a deeply felt sense of mimicry, or what academics call imposter syndrome?

I’m in a place now where I can own up to these contradictions without shame and guilt. In fact, I confess to a sense of humble knowing that I stand outside of most fences.

This liminal space has been a creative space. It has nursed many heartaches and dreams.

What is Love without suffering?

We Filipinos are famous for our musicality. Everyone can sing. Everyone (almost) owns a karaoke mike and can belt out Original Pilipino Music (OPM) or tunes from the old days of the Bee Gees, Carole King, Frank Sinatra, or Celine Dion.

Our choirs like the Madrigal Singers or the UP Concert Chorus have won international choral competitions in Europe and Asia.

Still I was surprised that there was a Filipino choir at the top of Montsegur hill that summer day in the South of France. The choir was a small group and I can’t remember now what song they were singing but my heart jumped as I heard angel voices coming from somewhere as we were walking the grounds of this ancient church where a massacre of Christian believers had occurred hundreds of years earlier during the Inquisition.

Perhaps they were drawn to sing to the ghosts of that place. To send them peace. To cleanse the Land where blood was spilled. Or perhaps they were just too moved by the beauty of the place that all they could do was to sing in response.

This happens to me quite often, too. I hum when my heart has no words to offer to the sublime moment.

There is a choir always over the hill, singing….

332     I forgot life defined through the credit card.

Today I had to order new checks from the bank. I wanted to ask the teller if I’m the last of the dinosaurs who wouldn’t do online banking but I didn’t. Why should I give him the pleasure of mockery?

I do not know anything about crypto currencies either.

Let the world leave me behind. I feel the narrowing of my materialistic horizon. I prefer it this way.

And I suppose Pankaj Mishra would agree that this mimicry of neoliberal promises must end not by policies or law but by individuals choosing to opt out of a dream.

Of course the wars will never end because it keeps the economy going. They have to keep manufacturing and selling weapons to Iraq, Saudi Arabia, Syria, Yemen, Iran, and everywhere else.

Also sell guns to hunters of animals and even allowing the import of trophy animals. They just introduced kangaroos in Wyoming for future hunters.

The world of credit cards and debts keep all the worker bees too busy to stop and think.

Bayo Akomolafe is on to something here: indigenous wisdom + quantum theory + agential materialism.

Invites all to slow down and be lost.

Leny Mendoza Strobel has a website: https://www.lenystrobel.com/ She also writes essays at https://medium.com/@lenystrobel. About Poetry, she says: I try to live as poetically as I could even though I feel that English fails me in writing poetry.

So
I tend
a garden instead.