OF LOVE AND VIRTUE by CARMEN F DAVINO 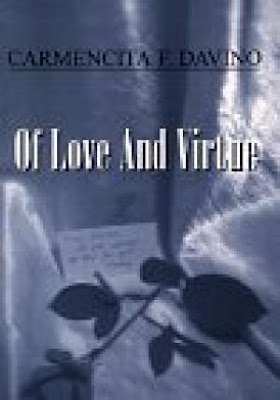 Of Love and Virtue by Carmen F Davino
(A Company of Angels Publishers, 1998)

A novel---about the Philippines and the Filipino family---published in a foreign country where the author has been residing with her beautiful and God-fearing family for many years, Of Love and Virtue is an interesting attempt to introduce to American and Asian-American readers glimpses of Philippine culture. Davino's giftedness in the English language has not rendered this "cultural attempt" exoticizing and/or ethnocentric. Rather, any reader, whose one objective of reading a novel of certain themes is to enjoy and to be moved by it, would relate to the universality and transcendence of family values elegantly and earnestly portrayed in the expressions and longings of each character: respect for elders, sincere consent of parents on their child's marriage, one's fidelity to the significant other, generosity among siblings and the like.

Translations and brief notes about Philippine cuisine, clothing, performing arts and intangible heritage (i.e. habits and folk beliefs) welcome the reader. Expecting a reader to inspect the text with emphasis on its cultural significance, the author did not rely on the fact that only Filipino readers would love to read works written by their fellowmen. There must be another fact: any work by a Filipino writer driven by passion and attentive to the "literariness" of his or her potential oeuvre surely will be patronized by readers and critics around the world.

Devised as the perfect tool for narrating this decade-long tapestry of familial affection, sporadic betrayals and loves-that-should-have-been, an omniscient eye presented the character with all their ups and downs, thus creating a labyrinth of unpredictabilities in Davino's characterization. The course of events, not to mention the monotony of cocktails, dinners, fiestas and piano recitals---all subscribed to by the novelist in capturing a 1970s society highlighted by elites and career-oriented individuals—bore witness to smooth, sometimes drastic, character development. The prudence and innocence of Cristina La Madrid, as she discovered her boyfriend Eddie Ramirez's womanizing, was lifted in midair and translated into a set of unrequited desires and an ephemeral expression of sensuality towards her "special American friend" Randy Hathaway. The ruled-by-the-head attitude of her mother Betty descended into the pool of forgiveness and kindness while "grinning and bearing" Dan's (Cristina's father) occasional slippages. And tinges of jealousy from Cristina's best friend Consuelo were rechanneled into her full realization of love for her manic-depressive, fatherhood-fearing husband Robert.

This authorial intent of a voice reflected a collective psyche, that Filipinos are not at all judgmental and rush in the surfaces, Filipinos wait, hope and pray for a miracle of time that people change their old ways and become better.

Given that the setting decided on by Davino was the tumultuous seventies immortalized by the declaration of Martial Law, the plot integrated some of the pressing issues of the period (issues which at present still haunt the archipelago). The first chapters presented how demarcated was the line between the poor and the rich, how the poor clung to the sharpness of risks working overseas or marrying an old foreigner, and how the rich outdid one another in grandeur and spectacles and political connections. There also was the portrayal of the gay makeup artist "Stephie", with the story tracing his identity as a GI baby; this segment concerned itself, in a little but special way, with homosexuality and the Filipinos' unquestionable drooling for the green card.

Amidst these endeavors for political and historical relevance, what the novel would be remembered for was its constant appeal to enumerating the travails experienced by women, at home and in the society.

Liberal views on marriage, rearing children, the educational system, and ones responding to a society dominantly male, patriarchal and chauvinistic, had been raised and exchanged by the characters, mostly women one generation apart, while they were sitting by the veranda, sipping tea contained in elegant silverware. Some chapters, close to all, had vignettes of conversation between two women telling how weak and strong they were whenever the news of their husbands' frailties and insatiable libido poured into goodtimers reached their ears. (This novel must be a tome of self-help and marriage counseling trinkets!)

Davino's gift relied heavily on her dauntless description of objects and backgrounds. The way she enumerated the shapes and angles of chandeliers, the metaphors for jewelry's permanence and brilliance, the bits and pieces of gustatory paradise, all these were what the novelist extracted and exhausted from her disciplined study and from her reflections of a life promised (and premised) to be well-lived. How a young girl felt unfathomable sorrow over the death of her grandparents, how a young man was dazzled by the poise and grace of the most beautiful lady during the town fiesta, and how a woman engrossed on her career could melt before the love of her life, Davino possessed the knack effortlessly articulate.

Stories tracing Betty's childhood, especially the early life with her father, and the spoiling done by her Ima Trinidad, stood out as the products that would most exemplify Davino's eagerness to portray a history full of optimism peeking out of mourning and love at the foot of indifference.

An assurance is that a reader who is usually a fan of wartime, morbid and sordid sorts of magic realism, will be awed by her grasp, should one say sweet command, of the language. Thus, lovingly and virtuously reading Of Love and Virtue will resuscitate his interest in romance fiction.

Since 2016, Aloysiusi Polintan has worked as a Senior High School Principal in Divina Pastora College. He started scribbling poems and essays when he was 17 years old. These poems are still kept in a notebook and wait to be revised for future publication. This notebook will be revived and will give birth to language already "lived." That is why his blog is named "Renaissance of a Notebook," a blog of poems, personal and academic essays, and flash movie reviews. His book reviews, which are published and featured in The Halo-Halo Review and Galatea Resurrects, are also to be found on the blog, under the series title "Mesmerized." He believes that the ability to judge or critique a literary piece starts with the reader's being moved and mesmerized by the artful arrangement of words articulating some longing for freedom and individuality. He's now working on a manuscript of 50 poems, with a working title of Brittle Sounds. He's 24 years old, living in Nueva Ecija.