TO BE AN EMPIRE IS TO BURN! by EILEEN R. TABIOS 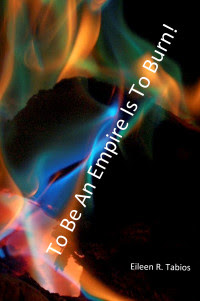 To Be An Empire is to Burn! by Eileen R. Tabios
(Moria Books/Locofo Chaps, Chicago, 2017)

Eileen R. Tabios’ 2017 chapbook To Be An Empire is to Burn! presents different templates for empires, all sharing a common theme of power: who wields it and how.

Ever the prolific and prudent poet, Ms. Tabios declares in 11 poems over 20 pages what others might attempt to do in 150. In attainable and straightforward language, the poet summons contemporary muses, including activists amplifying the struggle, architects of change. Brevity notwithstanding, her verses deliver a needful jolt to deeper political awakening, resistance and action.

Commenting on the resurgence of fascism and unbridled greed in the U.S. and the Philippines, the poet simultaneously depicts people-powered resistance movements. “#NoDAPL” asserts that the empire thrives on extraction of resources: who has power to take and make a profit.

Filipinos in the diaspora who are keeping up with violence and brutality exacted by the Duterte administration need no orientation about extrajudicial killings of indigenous leaders and activists defending their right to survive. The lamentation: “Our survival is your survival” is an ominous divination.

As our people continue to create and sustain beauty amid misery and demise, lingering grief and anger is captured in the Hay(na)ku “Ferdinand Edralin Marcos” and “The Dictator’s Daughter.” Current campaigns to rewrite history only expose old wounds.

“Power corrupts absolutely” and it has potent sanitizing effects. The United States’ preoccupation with its military empire has only resulted in “white marble tombstones.” Even those who come close to dishonoring the empire can seek redemption by designing handbags.

To Be an Empire... is an antidote to the hopelessness and malaise in this age of Trump and Duterte. As Ms. Tabios writes:

“...the many witnesses
from even oceans away
will pray, sing, dance
make art, write poems”

Our songs, poems, dances and art are medicine to ensure our survival.

Maileen Hamto was born and raised in Manila, Philippines during Martial Law.  She was 10 years old during the first People Power Revolution (Edsa 1) that overthrew the dictator. A highlight of her fourth-grade experience is memorizing the Preamble to the country’s newly drafted Constitution. She attended Esteban Abada High School in working-class Sampaloc. Her family arrived to the U.S. in the 1990s by virtue of their matriarch’s career in nursing. And so began the lifelong journey toward decolonization, toward making sense of racial stratification in the U.S., always sharpening the proverbial bolo knives.

(She could include details about three academic degrees earned in the U.S. and how she pays the bills, but there’s LinkedIn for that.)