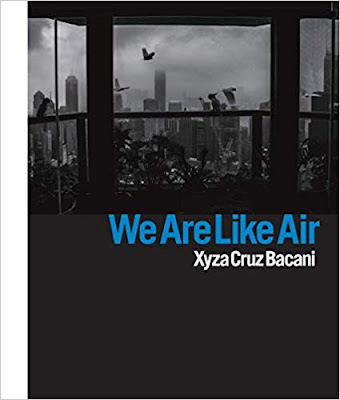 I recently received this beautiful book, Xyza Cruz Bacani’s We Are Like Air, which I thought I was ready for, and I am clearly not. I’m so moved, I don’t know where to start. I have been loosely following Bacani’s work, images of hers, articles I’ve been able to catch online. The super short story is that she was a domestic worker in Hong Kong, and she became a documentary photographer, depicting the lives of Filipino overseas workers, separated from their families. I’ve seen Bacani’s work at CNN.com, read about her at various news outlets, including The New York Times.


Her black and white images are gorgeous, compassionate, human. The people she photographs seem to trust her, and I say this because they allow themselves to be/appear vulnerable, genuine in their emotions. They are in the streets, in shelters, in the homes of their employers. They trust her to tell her about themselves, where they came from, how they got to where they are. What are their hopes.
I have written poetry after some of her images, especially the ones at the CNN website. My sonnet cycle, “Prayer on Good Friday,” in Invocation to Daughters, comes after my experiencing Bacani’s images there. I am currently working on a series of poems, called “Air.” Or Air. A long poem, or more likely, an entire book of poems.

What I wasn’t ready for in We Are Like Air, is not just her own family’s story that she is trusting us with, that she is brave to tell, that her whole family is brave to tell. I previously had an intellectual and surface understanding that when the income generated from domestic and service work abroad does not suffice, that the rest of the family must also consider whether they will also go abroad; that generations of family become migrant workers. I know there is absence; children grow up without their parents there; they celebrate graduations, Christmas with absence.

What I was not ready for are the handwritten letters from these daughters to their mothers abroad. These letters are so honest, articulate, and painful to read. The resentment, the rebellion, how a girl child missing motherly guidance “messes up,” falls in with the “wrong crowd,” gets pregnant, how their motives and intentions are complex. How the mother writes back — and we see their handwritten letters, and how emotionally complex these letters are. How does the family persist, how does a marriage persist, when the bonds are tested this way, again and again.

I am thinking about how I found the handwritten letters of Mary Jane Veloso at The Rappler website, and how this was everything. Again, underscoring how crucial it is for the Pinay, for every Pinay, to have the unmediated opportunity to tell their own stories, pour out the mixed up, complicated contents of their own hearts and minds.

There is so much love in this book. It’s so strong.

Where does my writing after Bacani go now, but everywhere — this difficult multi-valence. I have only had Bacani’s book in my home since yesterday evening, and I am overwhelmed with it. Such gorgeous, heavy air.