THE IN(TER)VENTION OF THE HAY(NA)KU: SELECTED TERCETS by EILEEN R. TABIOS 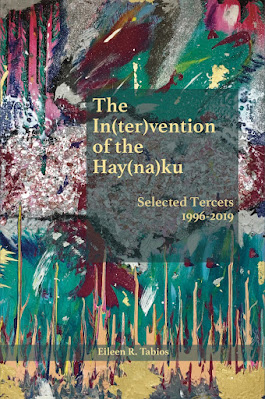 The In(ter)vention of the Hay(na)ku: Selected Tercets by Eileen R. Tabios

The following was presented as an Introduction to Eileen R. Tabios’

book during its Marsh Hawk Press Book Launch, May 2021.

A precocious undergraduate emailed to ask if I’d take her on to study poetry. At NJIT (New Jersey Institute of Technology), where I teach along with fellow poet Jon Curley, I’ve learned to be skeptical about such a request. But she mentioned Jon had sent her. So I met her for a slice of pizza, and discovered she was interested in prosody.

“I read about it in the Princeton Encyclopedia of Poetry and Poetics,” she said matter of factly. Now she’s read several of Eileen Tabios’ books (among the sixty published by this force of nature).

Too many readers overlook a poem’s form, ironically. Tabios does not. Yet she’s always bending it. Thomas Fink points out, in his introduction to The In(ter)vention of the Hay(na)ku, that this book “involves theorizing about poetry [from] within the poems.” James Joyce found poetry too confining. Tabios must always transcend her own formalisms—their own magnitude and brilliance. What one writer lives in or with, so the other.

Tabios is intrinsically drawn to form for reasons to do with how aesthetics and thought touch. Robert Creeley wrote what I see as a hallmark of post-War American experimental poetry. Titled “A Piece,” the poem has five words—two each in the first two lines, one in the last. Its unobvious symmetry is evident in its reading: “One and / one, two, / three.” When once asked about this poem, Creeley replied: “I knew that for me it was central to all possibilities of statement.”

Tabios may not know Creeley’s poems well. Nevertheless, she possesses the instinct in that non-poem. I’m awed by her intellect that’s always understated. Hay(na)ku Death Poems—comprised of the standard Tabios tercet of 3 words, 2 words, and one word—is a fit rejoinder to Creeley’s poem. Here’s all four stanzas of her poem’s twelfth section: