ACCIDENTS OF COMPOSITION by MERLINDA BOBIS 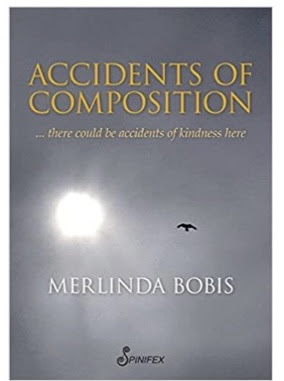 Accidents of Composition by Merlinda Bobis

Merlinda Bobis is the award-winning author of four novels, two short story collections, five poetry books, several performance works and a monograph on creative research. She was born in the Philippines but is now based in Australia where she teaches creative writing at the University of Wollongong.
The title of her latest poetry collection is deliberately ambiguous. We see through a glass darkly: the word “accidents” suggest “chance” but the word “composition” proposes something much more structured and deliberate. Was the “Big Bang” a chance collision or a controlled explosion ushering in the universe? The title has a sub-title: ‘there could be accidents of kindness here’. The words ‘could be’ and ‘accidents’ carry with them an element of possibility that is not fully confirmed while the word ‘kindness’ gives hope.

In the Afterword, Bobis writes: ‘Let the poem speak for itself. No poet must explain. Do not betray the labour. Yet I choose to reveal the accidents, the gifts behind this book.’ She goes on to explain how the genesis of this book started on 18 October 2014 in a tourist bus travelling across the desert after visiting the Grand Canyon. ‘As we sped along, behind the glass window was a black bird close to an eerie sun, like a white hole against storm grey sky. I took a picture: an accident of composition. A poem.’ The photograph is on the front cover of the book and the poem that it inspired is the opening poem in the collection. I quote it in full because it is the key to everything else that follows.

AFTER THE GRAND CANYON

punctuated by a raven –

but which composes which

and which is accidental?

Is it the sun

sucking in a bird

to singe the sun?

before the answer is given,

the fingerprint of god.

The bird is both a raven, in Celtic mythology linked to darkness and death, and Icarus who, in Greek legend, is about to meet his death. Look more closely and you will see that there is something rather strange going on in this poem: Bobis poses the question – is Icarus about to singe the sun? In the Greek legend, he does no such thing. The very opposite happens – the sun singes Icarus, it melts the wax on his wings. Here is another “accident” of composition.

In this collection, Bobis draws her inspiration from archaeology, glass making, navigational exploration, colour, cooking and clouds. The collection spans continents and centuries. Images cross borders, contexts overlap and everything about ‘Accidents of Composition’ gives the impression of being ‘on the move’ where stories from the past, real or imagined, are as important as ones from the present.

Respecting the author’s wishes to let the poems speak for themselves, I will resist the temptation to offer up any critical analysis and just make the briefest of observations in order to give readers a flavour of the book.

As mentioned above, several poems are inspired by archaeology and ‘The Stone Magistrates’ is one of them. It is inspired by a fragment of sarcophagus that is housed in the Museo Arquelógico de Cordóba. The opening stanza conveys something of the poet’s longing to get to know her subjects, to step into their shoes and, out of sheer curiosity, to live for a moment their lives:

I want to touch your faces,

and feel you whisper,

leaning against each other

History is defined only by ‘what we think we know’…it too could be full of accidents of composition.

In the second section of the book, subtitled ‘How to Spin’, several poems make reference to the art of spinning glass. In ‘The Glassmakers’, a poem from Canberra Glassworks, Bobis spins us another set of illusory phenomena –

could be an orange lollipop on a stick.

No, a sunset turning and turning

then plunged into water

and retrieved as if from a bath,

a baby laid on a wooden cradle.

No, a new planet,

a blown egg veined with flowers

or a crystal ball…

To Bobis, it is all of these things. It is a celebration of the creative mind at play. This is what poetry is all about. It is:

of its own becomings.

‘Dream of Oceans’ is the first in a series of poems concerning Fernando de Magallanes, the Portuguese explorer who is credited with opening up the first maritime trading route between Europe and Asia. Right from the start Bobis seems to sense this navigational explorer’s drive and enthusiasm. The intensity inherent in these opening lines is apparent for all to see:

Fernando de Magallanes had a thing

for water: the vaster and more strange,

the deeper his longing.

Perhaps he was a thirsty man,

the thirst so punishing,

he renounced Portugal in 1517

when the king did not listen,

turned his back on his boyhood

and his nightly dream

of cloves, to seek new waters.

A fascination with colour manifests itself in a number of poems. ‘The Story of Blue’ is a beautiful meditation on a chipped teacup containing those distinctive chinoiserie patterns (known as Willow Pattern) inspired by fashionable hand-painted blue and white wares imported from China. It is a poem that is packed with history including the very personal history of the family whose lives are portrayed in the poem. The fragility of the china is matched by the fragility of human life. ‘TV news is infested with it / and the shards we sweep under the carpet to survive’.

Having recently read “The Cloudspotter’s Guide” by Gavin Pretor-Pinnie, the founder of The Cloud Appreciation Society, I was attracted to Bobis’s poem ‘Homesick for Clouds’ which makes its appearance in the last section of the book. Its simplistic layout, five stanzas whose initial lines follow a repetitive formulaic pattern, sends  a message about the life-giving properties of rain and how  weather can affect many, if not all, aspects of our lives. Even though it is light-hearted in tone, I am haunted when I read it now by the scenes we saw on our TV screens of the terrible wildfires that broke out over large swathes of Australia, and other parts of the world, last year…a time when those affected must surely have longed for rain.

Reading this collection I was struck by how the poems complement each other as the book unfolds. Far from being seen as isolated incidents, Bobis weaves them together with literary threads so that they become a single seamless entity. This is achieved in a number of ways. The first and most obvious is the way the subject matter dictates the order in which the poems appear (super typhoons that link “After Reming” with “The Lost Notebook” and “Cassandra After Haiyan”). The second is the recurrence of phrases (the title of the collection makes an appearance in more than one poem in the book and it also reappears in a slightly altered but still recognizable form in another poem). The third is to do with the continuity of the narrative which is most notably observed in the poems on navigational exploration and the reappearance of named characters across different poems. Lastly, there is the recurrent preoccupation with colour (purple in “After Reming”, blue in “The Story of Blue”, cobalt blue in “Feather, Seahorse and Atomic Explosion” green in “Calle Verde” and a profusion of colours in “Still Life”.

For Bobis, the creative process is like a mystical visitation. In her own words she describes it as follows: “Writing visits like grace. In an inspired moment we almost believe that anguish can be made bearable and injustice can be overturned, because they can be named. And if we’re lucky, joy can even be multiplied so we may have reserves in the cupboard for the lean times.”

These poems, bursting with curiosity and a hunger for knowledge, are etched with joy, awe and wonder. They do not presume to explain anything, but they capture the human desire to experience life in all its fullness in the short time that we have on earth. Bobis exhorts us to listen ‘less we miss the music’. As the opening poem shows, nothing is quite as it seems, and that is the beauty and mystery of life as we know it.