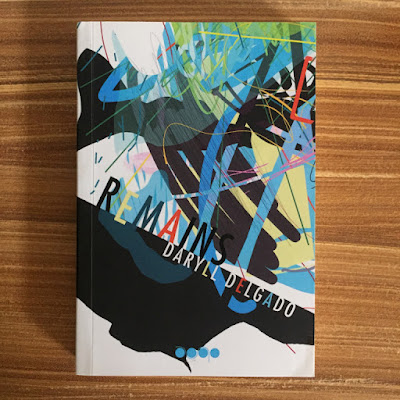 The Author as Development Worker: notes on Remains by Daryll Delgado

The author is a development worker in Daryll Delgado’s novel. Ann goes to Tacloban, Leyte recently destroyed by Super Typhoon Yolanda (international name Haiyan), as part of an NGO but also in the hopes of resolving family secrets, both close and distant. Her homecoming of sorts aboard a C-130 Hercules, the sea and the city below her, brings back memories of childhood – her father’s jokes, but also a triggering of the senses, specifically getting a whiff of decay. This jolt, corporeal and intimate, is at the same time a moment of language returning, Waray – her fluency of which helped her bag the assignment. When she says dunot out loud, her companions in the plane, twice as much as outsiders than she is, are confused. These passages of layered and detailed recallings throughout the book are vivid anchors to the protagonist and the aftermath of Yolanda. When recalling a typhoon in ‘84 that Ann experienced as a child, she describes “The smell of the ocean, for instance, which became more intense, darker, denser. In fact, before the storm, I could already sense a shift, something thick, almost spicy, in the air. And, of course, the smell of rotting and decay that pervaded the air, after the storm.”

Ann’s narrative oscillates between reconstructing family memories and her documentation work in the field, in both undertakings the tone shifts eerily from nostalgia, fascination, and disenchantment. Ann and her sister Alice grew up in a household belonging to a provincial middle class, both parents are white-collar professionals. There’s also Mano Pater, his father’s assistant and her Tito Jun, her mother’s brother. These two male figure, whose roles remained unclear, will be pivotal to the movement of Ann and her family. They fled Tacloban shortly after Jun was murdered, and now Ann returns to look for Mano Pat’s daughter – hoping she survived the deluge. It becomes apparent that these undefined relations are parts of what I like to call middle class silences. To a child of comfort, not everything has to be spelled out.

These hazy memories are confronted by Ann via coming into terms with Waray, the mother tongue made alien because of relocation, now serving as a bridge to her developmental work and personal mission. “We experienced other typhoons after it, but that one in ’84 was the one that made the strongest impression on me. That was also when I first heard the word lunop, mentioned many times by our labandera and by Tita Lina. I always associated it with the word inop—dream—and linop—confusion or dizziness. I never fully understood the term, but, for years, every time I heard it, lunop, I had a mental image of an entire place overcome by great dark waves, or of me struggling to reach the upper level of an old house but overwhelmed by wave upon wave of black water. A little bit like mania, tantrum, I guess. But this was one of my recurring dreams, my inop, from which I always woke up confused, linop.”

Ann is based in Manila but always on the move, her father has passed away, and her mother is hinted to be working for progressive solidarity networks in the US. Meanwhile Alice, also in the US, is someone to talk to, either in making sense of, or giver of caution to, her sister’s altruistic adventures in disaster zones or as companion in the game of rebuilding family history. These exchanges sometimes bringing relief and insight, sometime stress and annoyance. Remains starts strong with all these overlapping plot arcs, but all these will also burden it in the end. None are unpacked extensively, nor are they linked clearly. The sense of disarray lingers, both temporal and spatial, on Ann and on readers. Obviously not on the same level to what the survivors went through, but it prevents her from being totally invested in the tasks she set out for herself. Ann trying to make sense of her family’s past, and not arriving at clear resolutions, is juxtaposed with her interactions with grieving locals asked to compose their trauma. The open-endedness of it all serves a purpose, but I wish there was a bit more to latch on to beyond episodic encounters.

Ann spends her days in Tacloban translating trauma and havoc into reports, deliverables, infographics. Testimonies or transcripts, attached to the end of chapters, are written in Waray, and later translated into English by Merlie Alunan, for us readers and for the NGO’s funding source. Some are straight forward, others are lachrymose, a few idiomatic. All responses to, and afterlives of, disasters. These reports also further expound the internal and multilingual code switching in Ann. Waray and English not just languages but lifeworlds, traversing them is both a responsibility and privilege, and Ann it seems, does not recognize it as either.

Tacoblan, or Leyte in general, as a location is presented as both central and peripheral – either some peculiar gothic outskirt but also as the nation’s microcosm. This fluid positionality is reinforced early in the book as several tangential events are mentioned; Balangiga massacre during the Filipino-American War, MacArthur landing in World War Two, First Lady Imelda Marcos’ humble hometown during her husband authoritarian reign, the mountains being refuge to colonial era rebels in the past to an on-going communist revolution in the present. These historical spotlights however are of little value to locals – more like textbook trivia. History moves in a circle for a people consistently battered by ecological havoc and perpetual underdevelopment, forces that feed each other. People just want to get back on their feet, at least until the next problem one comes along. Previous disasters can only be theorized by those who were able to, or lucky enough to, live through it like Ann. In an era of intensified environmental pillage and more frequent natural disasters, Remains is a novel of the plurality of tragedies.

When she has the closest thing to answers regarding the daughter of Mano Pater, Ann’s data collection is also done. Before leaving, Ann going drinking and blends easily with other foreign aid workers. A woman made out to be deranged starts haranguing them in Waray. Everyone is shocked and pauses, but only Ann comprehends. Just like in the beginning, she is haunted by the ghost of multiple voices. “My face went red at the violent accusation, that we were enjoying ourselves, bloating our bellies with food, while everyone else was suffering, dying of hunger. At the same time, a part of me was thrilled, titillated to hear the curses in Waray—you demons, sons of bitches, worthless whores. I was perversely elated at the honesty, the crudeness, the vulgarity of it.” After handing in her reports, both overwhelmed and dissatisfied from the trip, she contemplates going back. Daryll Delgado has composed a story written in prose that is ceaselessly blunt in one moment and allegorical in another, illustrating that bearing witness is a grey zone, paralyzing even, and often not enough by itself for people to be mobilized.

I greatly admire the decision to make the book multilingual, in a broad sense, as the English parts are longer than the sections in Waray. There is no attempt to render local reality using a foreign tongue, as is the common practice by postcolonial Anglophone writers – Filipino or otherwise, but instead English is put to a test on what it can and cannot do or express. It is often found wanting, but never denounced. The vulgar nationalist in me would prefer a story written completely in a local language, but Delgado’s endeavor to scrutinize English in both a local context and a transnational dimension is very impressive. A protagonist that is a development worker is a concise convergence for this self-critical creative exercise. The book is locally specific but undeniably global, and demands much more to Filipino readers also haunted by multiple voices and lifeworlds. I think another work that has done something similar, and successfully is Glenn Diaz’ The Quiet Ones (Ateneo de Manila University Press, 2017), with Filipino BPO workers and foreign execs as characters. Lastly, another layer is attained when we keep in mind Arundhati Roy’s notion that development work, or even simple charity, as a diffuser of dissent. My own outsider memories of Yolanda is made up of news of foreign aid workers availing services of evacuees pushed into prostitution, deflection of accountability by the Aquino regime in the expression tumulong ka na lang, and rotting food packages never distributed. This barrage of post-disaster state ineptitude not very different from the current Duterte regime‘s handling of the pandemic.

I am hopeful that more works like Remains about interrogative bearing witness to ecological disasters will emerged. Embarrassingly, I am not familiar to works tackling the damage of Yolanda to localities closer to where I am, namely in Central Panay. I remember I was a college senior when we were organizing a donation drive in campus when one of my teachers bemoaned the lack of media attention given to ruined areas of Western Visayas. It is not a competition, but in this country, attention like economic wealth is unevenly distributed. I recognize Remains as a more sustained act of remembrance. One story I am more well-versed in and openly endorse is Rain, Rain, Go Away (Chris Martinez, 2011), an episode of Shake Rattle and Roll 13, which is loosely based on, and a commentary to, the flooding Typhoon Ondoy brought in Metro Manila in 2009, and again the plurality of experiences of the said tragedy. In Remains the creation gap is a bit longer as it came out in 2019, six years after Yolanda, but it is worth the wait, not to mention having a form to reflect on and eventually exceed. May others take up the task. When Ann is contemplating going back, I believe this restlessness to shed off the developmental frame is a step closer to a more radical potential, this time viewing the debris as objects of collective agitation not just of grief and aid.

Eric Abalajon is currently a lecturer at the University of the Philippines Visayas, Iloilo. Some of his works have appeared in Revolt Magazine, Loch Raven Review, Ani, andKatitikan. Under the pen name Jacob Laneria, his zine of short fiction, Mga Migranteng Sandali, is distributed by Kasingkasing Press. He lives near Iloilo City.