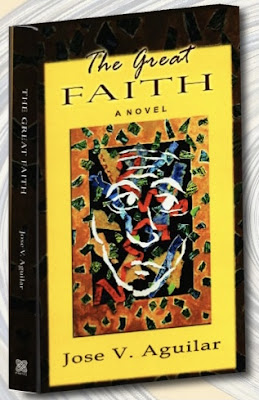 For anyone who wants to understand what it means to be a Filipino, a good place to start is Jose V. Aguilar’s engrossing historical novel The Great Faith, First published over 70 years ago, the novel is about “the Japanese occupation of the Philippines,” in the words of the author’s daughter Delia D. Aguilar, who copyrighted this 2020 edition and gives intimate details about her father in the Introduction. She is contrite that she did not read the novel then and could not talk about it with him.

Aguilar was educated in 1921-1925 at Denison University, a Liberal Arts school located in Granville, Ohio. He was conferred a Ph.D. honoris causa by Central Philippine University in 1952. He was appointed Dean of the College of Education, University of the Philippines, and later as Director of the Philippine Center for Language Study.

Identity is a theme of the novel, collaboration is another. The novel's main thrust narrates a fictional tale against the unfolding of actual historical events, with the characters that represent personages from the society of the time. Collaboration is pejorative in a wartime context, but not in the artistic that yields, such names as Rodgers and Hammerstein, Lennon and McCartney. In war and espionage, it implies traitorous cooperation with an enemy. In the Philippines during World War, there were prominent men who collaborated with the Japanese in administering the government and schools. There were also collaborators who betrayed the country by becoming informants of the enemy..

More importantly, the novel evokes previous colonization by Spain and America—the atrocities their soldiers inflicted upon the insurgents and the civilians caught in the crossfire. What comes to mind is the massacre and burning by American soldiers of Samar, Philippines (1901) and My Lai, Vietnam (1968). I witnessed from the slopes of Mayon Volcano the bombing of Legazpi City from U.S. warships anchored in the bay. B-52 airplanes destroyed a barrio six kilometers from my hometown; the fifty plus civilians killed were buried in the craters left by the air raid.

This essay focuses on the language and the fictional strategies that Dr. Aguilar deploys to make his novel come alive. The time setting (1941-1945) brackets the plot episodes. It starts with refugees leaving Manila for Capiz, viewed from the perspective of Concha, and culminates in the liberation of southern Panay, after a fierce battle between the Japanese invaders armed with machine guns and the guerillas fighting with automatic rifles. “It was a glorious epic.” (341|

Concha, Spanish for “shell,” opens the novel with her awareness of two momentous events—the untimely birth of a child carried by Florentina, and the impending Japanese invasion. Florentina’s husband is Captain Licdaw who was a school supervisor, and a reserve in the Philippine Army. Concha represents the consciousness of a country under siege and that, perhaps, accounts for Concha being depicted as “sickly.” Shells, however. are usually perceived as feminine—a symbol of birth, good fortune, and resurrection—hence Concha’s name portends her recovery.

The narrative unfolds in the country’s archipelagic topography—mountainous terrains, plains, and coastal areas. Using the omniscient point of view (POV) the novel displays a melange of prose styles: lyrical and pictorial, florid and overwrought, homiletic and didactic. The styles are shaped by the characters of various ethnicities —aborigines, Malayan, Castilian, Chinese, and Japanese. The narrator describes their physical appearance, perceptions, memories, and truncates the English syntax to reflect their speech. E.g., the observant cook Panang says, “Maybe the master not coming soon.” (11) A Japanese soldier asks, “You Americang or Hirripino?” (64) In a homiletic turn, the guerilla captain Lino Seville muses, “War was hell is . . . Guerilla was a greater hell!” (251) The villainous traitor Bucarin rationalizes his “addiction to blackness” with an epigram, “the measure of patriotism consisted in lives saved.” (242)

At the very least, Filipino identity-seekers can find counterparts among the tapestry of personages from various strata of the society: the collaborators both loyal and traitorous, who spied for the enemy and betrayed their country; the educated cadets and uneducated peasants who joined the insurgency; and the bandits who pillaged the countryside and terrorized the peasants. These characters voice observations and opinions peculiar to their status, and shape the readers’ attitudes about status, behavior, and relationships.

The wealthy Dr. Juanico Luces with a Castelian complexion, reputed to be the son of a Spanish friar, heads the Luces family: his wife the sensitive and sickly Concha; his mestiza daughter Agnes, who possesses a “soft beauty and steely temper,” and adept with a “fan-dagger” (337): and the mischievous and athletic son Rustico who joins the guerillas as Lieutenant Luces. A foil for Agnes is the nurse Solinda, a “transcendent” Malayan beauty whose brown eyes, upon witnessing lightning and thunder, “lit up with the elemental love of nature in wild display.” (52)

Agnes is an ambiguous character; she entertains Takahashi but fends off his advances that makes her “dimly conscious of her nakedness above the neckline of her loose nightgown,” saying, without the least trace of a tremor, “No, captain, Filipino custom does not permit this.” The novel does not say that she yields, although Abordon who attempts to rape her says, “I’m willing to forget Takahashi has been here.” (337) As a symbol, Agnes represents the Filipino women who consorted with the Japanese, some bearing their children.

Lino Seville is the protagonist who survives the Bataan Death March and joins the organized military guerrillas. His schoolteacher mother Marcela has concealed from him the name of his father, until toward the end of the novel. Lino figures in two love triangles; the resolution of each drives the narrative, along with the skirmishes, garrison attacks by guerillas, and burning of houses by the Japanese, led by Captain Takahashi who also figures in the second love triangle.

The following passage, that reads like Hemingway, locates Lino Seville in a panoramic setting and builds suspense:

“Standing on the crest of the hill, he ordered Lieutenant Luces to reconnoiter the wooded swamp that spread away back of the old wooden schoolhouse and curved inward to join the low-lying hills toward the right. Behind him lay the expanse of the low mountains, bluish green in the dusk, and far beyond the outline of solid blue that rose up gradually from left to right, descending more abruptly toward the point where the big blazing sun had just disappeared. (249)

Oh! You are alive now! Lino, your masculinity, the man that is in you—Oh! You remember on the cove on the shore of Manila Bay—inky blackness, a gentle wind making the water lap the beaches, your hand, fine masculine hand, creeping up, hot, not to be denied? The unquenchable desire of the flesh that makes one one tremble for its satisfaction! But you, Lino, your hand, hot, conquering -- These fevered nights has the dream of that hand recurred, and the reality of it has shaken the aching body. (197)

Aguilar’s juxtaposition of the female and male attributes risks being called sexist today, as in this line that describes Bucarin as “a singular combination of masculine perspicacity and feminine vindictiveness.” He describes an eyebrow-raising love scene in lush operatic terms, complete with a “brilliant finale”:

She held his face in her arms; they were hot hands, and they burned his face. The earth exuded an elemental smell . . . lighted by the aroma that hung on her toilette, mixed with it a pungency that went to his head like strong wine. (264)

Aguilar uses the Victorian misplaced-missive trope, popularized by Thomas Hardy, with a couple of variations of where the message is concealed—a green bottle and a cut in a pomelo.(200) Jose Rizal writes a poem and hides it in an coconut oil lamp, Jose Aguilar writes a political treatise and hides it in a green bottle. Rizal’s “Mi Ultimo Adios” at least has thirty-five English translations, including Nick Joaquin’s etched in bronze at the Rizal Park. Aguilar’s treatise, ostensibly written by his fictional surrogate Licdaw, is an analysis of Japan's plan for the Philippines.

Aguilar’s deployment of the omniscient POV enables his characters to voice opinions and explicate abstract ideas, such as Licdaw’s green-bottle essay on the Greater East Asia Co-Prosperity Sphere. The concept was created and promulgated by the government and military of the Empire of Japan. It represented the desire to create a self-sufficient "block of Asian nations led by the Japanese and free of Western powers."

Another way of looking at Aguilar’s strategy is to think of the novel as a forum that enables the “guest speakers” to speak their minds. Licdaw’s lucid exposition of Japanese philosophical ideas, such as Shintoism and the ideology of the state, making them understandable and attractive, earned him from his detractors the indictment of a “collaborator,” and therefore guilty of treason. This was also the accusation confronting prominent families, like Dr. Luces’s family, “who have chosen to throw their lot with the enemy.” (250) A guerilla commander vows, “These men, while must suffer the consequences of their acts.” (251) The novel raises the issue of collaboration but does not completely resolve it. Some outright collaborators get their comeuppance during the fighting, while ambiguous cases, like Captain’s apparent embrace of ideas of the enemy await the judgment of post-war courts. This calls for another narrative that The Great Faith does not pursue, neither does this essay.

The preparations for battle scenes are reported by witnesses. Takahashi organizes three columns to attack the guerillas entrenched on a mountain ridge, burning barrios as they advance. The military guerillas have decided to engage the enemy now that submarines from Australia are dropping off arms and supplies, including American cigarettes. (249)

The climactic “epic” battle is brutal and bloody: a beautiful girl hanged from the floor beams is disemboweled; a military officer is decapitated, his head stuck on a pole; and a western-style shoot-out that avenges the killing of a Filipino spy mysteriously named Phantom. (310)

To conclude, The Great Faith imparts the lesson that to understand one’s Filipino identity one must know the country’s history. In the process of telling a gripping tale, Aguilar alludes to key points of that history in such a way that moves the reader to learn more. I braved the rain at the Luneta Park in Manila that day in July, 1961, to listen to General MacArthur deliver at age 81 his “ultimo adios,” and I cheered with the drenched crowd when he repeated his famous pledge “I shall return.” (The top floor of the iconic Manila Hotel, which was MacArthur’s suite, is now a museum exhibiting his memorabilia.)

Dr. Jose V. Aguilar “is recognized worldwide as the founder of the Philippines’ Community School system. He received the first Ramon Magsaysay award for Government Service in 1959 as ‘a far-sighted innovator and a dedicated educator.’” (342) I cherish his legacy as a writer and educator, and deeply honor his memory.