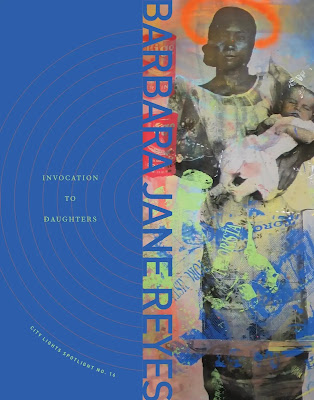 Barbara Jane Reyes was born in Manila and grew up in the San Francisco Bay area. She holds a BA in ethnic studies from the University of California at Berkeley and an MFA from San Francisco State University. She is the author of several poetry collections including Poeta en San Francisco (2005), which won the James Laughlin Award from the Academy of American Poets, and Diwata (2010). With her husband, the poet Oscar Bermeo, she co-edits Doveglion Press, which publishes political literature. She has taught creative writing at Mills College and Philippine studies at the University of San Francisco.

Invocation to Daughters comprises a sequence of 25 poems divided into five sections. Each section is prefaced by an invocation, a form of address like an opening prayer in a public religious service or, in poetic terms, a call for inspiration from a Muse at the beginning of a poem. There is also another flavour to this word because in legal terms it is a call or summons, especially for evidence from another case.

The opening poem is headed FAQ. In it, Reyes justifies her modus operandi. It is significant that the first question happens to centre on language: Are you fluent in your mother tongue? Finding the right language and the right framework in which to cast her argument is crucial. In common with some of her previous work, Reyes code switches between English, Tagalog and Spanish in her writing and does not provide a translation, footnotes or citations leaving it up to her readers to look things up for themselves. As Reyes goes on to say in the next poem, “Invocation to Daughters”:

A passive language strips us of our kick and grit and fight in our bloodlines. A vulgar language attributes our survival to others’ benevolence, belying our scars’ true, cruel sources. A language consumption frames our humanity as thighs, breasts and eggs. A language of proprietorship brands and cages us.

Daughters, let us create a language so that we know ourselves, so that we may sing, and tell, and pray.

The fact that some women do not have a voice is one of the key strands to this book. In Mythos some of the short sentences that are employed to describe this state of affairs stand out from the rest of the text: She is vulnerable….She is inaudible…She is vernacular…She is pregnable…She is spectacle…She is untranslatable…She is stifled. In this book, Reyes gives them a voice. Using the pronoun “we” she adopts a collective female voice, in which she speaks for all women and also for herself. The language she employs is powerful. In places, it is searing. The reader feels a righteous anger rising from the page.

One of the many strengths of this book is the way in which Reyes has chosen to express herself in a primarily devotional framework. A quick glance at some of the titles will illustrate what I mean: “Invocation,” “Gospel,” “Gloria Patri,” “Prayers of Petition,” “Orayson,” “Apocryphal,” “Psalm,” “Prayer on Good Friday,” etc. The book is headed with a quotation from Genesis Chapter 34 verse 9, a chapter that focuses on misfortune, degradation and sin in which daughters are traded in marriage as commodities. The last poem in the book is prefaced by a quotation from the Book of Proverbs. From a structural standpoint this schematic process works very well on a number of counts, not least because the rhythm has a familiar pattern to it and the repetition that she employs has an incantatory feel about it. Certain poems and cadences echo well-known passages from the Bible (“Gloria Patri” contains sentences that echo the liturgy and “The Gospel of Juana De La Cruz” echoes the first chapter of St. John’s Gospel) and become, as a result, that more forceful and memorable. The way Reyes makes use of this is masterful. Her book assumes the authority of a sermon.

Where did the idea for this framework come from? In an interview with Rochita Loenen-Ruiz (Inside the Writing Mind), Reyes had the following to say on the subject of religion: “Regarding faith, I attended Catholic schools for 12 years. When I was young, I used to go to church every Sunday morning, every Friday, every Christmas, every day of Holy Week. I never had a space to discuss faith. I was always told I had an obligation to do these things. They were mechanical, thoughtless acts….I am not a religious woman.”

Reyes employs a variety of poetic forms and styles: “Mythos” is a sequence of prose poems, “Guidelines for Women”takes the form of a numbered listing of points, “Prayers of petition” makes use of a repetitive, alternating pattern, “She Is” and “Prayer on Good Friday” comprise a sequence of sonnets in which the last line is the first sonnet is repeated as the first line of the next one, “The Gospel of Erasure” is, as it says, an erasure poem from a racist GQ article from the 90s titled “Oriental Girls: The Ultimate Accessory” and “Orasyon” is written in a sequence of trilingual quatrains.

Her patron saints and martyrs are daughters of our own time:  Jennifer Laude, a Filipina transgender woman who was strangled and drowned by an American marine in 2014, Mary Jane Veloso, who has been on death row in Indonesia for smuggling in heroin after fleeing her abusive employer (but has since escaped execution and is now being allowed to tell her side of the story) and Norife Herrera Jones, who was murdered at the age of 29 by her estranged husband in California in 2012. All of these daughters are named, invoked, blessed and mourned in her poems. The universality of Reyes’ poetry ensures that she is not only addressing the fate of Filipino women but women in all societies wherever there is violence, racism and misogyny.

Something of the power of these poems is evident in “Invocation to Daughters 4”:

We are fed up being groped, being entered, being punished, being trashed. We are nobody’s fucking things.

We own ourselves. We are ours. We are right to fear anyone believing otherwise.

Daughters, the word, ‘no,’ has been pried from our jaws. We will wrest it back, and guard it, and wield it as our sharpest tool.

There is another strand running through this collection and that is a more personal one where Reyes examines the often complex relationship between a father and a daughter. This is first examined early on in the book in the sequence of prose poems titled “Mythos” where she writes:

In the process of writing the book, her own father became ill and passed away and so the father became less abstract and more personal as did her writing. There is a moving sequence near the end of the book in which Reyes writes a prose poem about the last day of her father’s life. In the “Elegy” that prefaces it, she says:

We quarrelled epic. Know this. When you ask me if he was a good father, I will tell you, it is true he wanted sons. And so we were his boys, hard-drinking, tough, and foul-mouthed like boys.

The final two poems are exultant. In “Invocation to Daughters 5” she begins:

Glory be to the wild-haired daughter; she is

and in “Wisdom’s Rebuke” she ends with these words:

From all these negatives, Reyes affirms the positive. This is a call for freedom from the binds that tie, an impassioned plea from those who have been denied a voice, such is the power and the glory of this important book. Highly recommended.