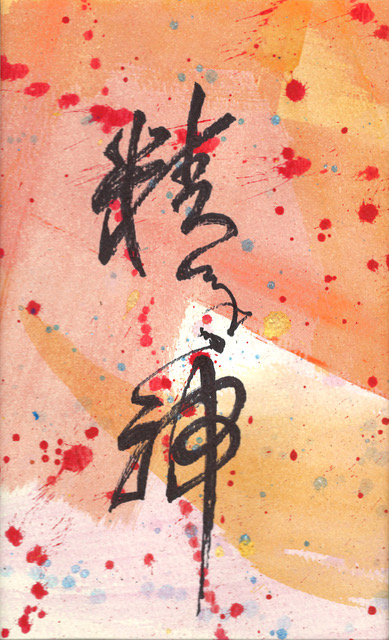 I have just received my certificate of completion for taking the online seminar on Chinese calligraphy as a Cultivation by Taoist priest Jeffrey Yuen. No, I haven’t really completed anything. The course presented in segments in less than one day seemed more like a beginning, an introduction to the basics. Learning calligraphy takes much, much more time, over years under the close supervision of a master. A day-long lesson does not make one a master.

To prepare for the lesson, we were asked to get, among others, paper (preferably xuan or rice paper), ink stone, brush and ink stand. Yuen Shifu demonstrated different ways of holding the brush, how to dissolve the ink in water and how to draw what is considered the first traditional character, Yong, that means forever or eternity. Yong contains the 8 basic strokes in calligraphy. When I studied calligraphy in Hangzhou 12 years ago, Yong was also the very first character I was introduced to. Jet-lagged, I drew 200-500 characters from a manual with a pen or pencil on a notebook into the night. Using brush and ink, I realized, was totally different from a pen. I wrote a poem about my first experiences with calligraphy (below).

Calligraphy is considered a meditative and divine art. You have to honor the sacred, so before you even start, you have to spend a time in an attitude of worship or contemplation to prepare your heartmind and body for the work. ("Heartmind" is a translation of the Chinese word "Xin".*) It is one of the 3 Perfections along with painting and poetry. The concept of the 3 Perfections came about when Zhang Qian, a poet and painter, contemporary and drinking buddy of Du-Fu and Li Bai, gifted the emperor with his painting. The emperor was so moved that he drew the words “Zheng Xian san jue” – meaning Zhang Xian’s 3 perfections – on the canvas. Since then the 3 arts have been drawn together as related work and a painting is invariably paired with a poem written in calligraphy.**

I followed the lessons by drawing the different characters. Yuen shifu said that he did them while in a horse stance/ma bo. Well, I did them sitting down, with my back straight, feet flat on the floor  and chin down … in the manner of a meditation posture.

There’s a long way to go!

2 am and I am writing more characters

in my notebook with a ballpoint pen.

There are verticals and horizontals

and diagonals … and drops and slides

and strokes I do not know the Chinese names

for. I study the length of this line, it’s longer

than the one above it. This line starts

hanging from a vertical, that one ends

where one line begins. Another

begins at the eaves of a roof. I start over

again and feel  the pressure

on the pen and how it varies the shade

of the ink, a little darker here, little lighter

there, thicker here, thinner there.

The proportion strikes me for the first

time, and balance, nothing weighted

down, nothing leaning this way

the perspective of the whole

character yet, not even each

drop. I notice that I have to learn

what it means to be light,  to spread

in the manual I am following.

used to tell me when I was training

in Shaolin and Tai chi: imitate and

the movement and I did each

until my sweat dripped to the floor

of the old Buddhist Temple.

Now each page of my sketchbook is covered

with squiggles.  There are no erasures,
no corrections. I can only start all

over again. I know a lot

more now. But I do not even have

an idea what ground I have yet to cover.

How about the Qi that each line

should manifest? How about the Shen?

How about the Life

that breathes through each stroke?

How did the ancients

write with brush and ink?

(Poem from Ascension and Return: Poetry of a Village Daoist by Rene J. Navarro (Tambuli Media)

* Xin (or Hsin in Wade-Giles) refers not only to the heart but also to the mind.

The character is difficult to translate, although it is often translated as heart-mind.

Like many Chinese words, like Yin and Yang, Qi, Ling and Gong, Xin should not be translated.

** For an extended study, see Michael Sullivan’s “The Three Perfections: Chinese Painting, Poetry and Calligraphy” (George Braziller, Inc.: 1999). I’ve also heard of a tradition, I do not know how old it is, of the 5 Excellences: poetry, calligraphy, painting, Tai chi chuan and Chinese Medicine. I’ve studied four of them. Well, four out five ain’t bad.