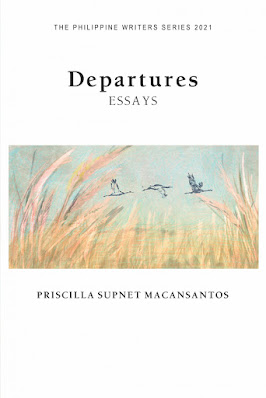 There’s much to recommend the project: the quiet gracefulness of the prose, the composure of the tone, its departure from the sometimes cloying and annoying angstiness and self-centeredness of the juvenile writing we so often find today.

This isn’t just the story of a father or a mother, or of the author herself – it’s the enlarging biography of a community, a region, a corner of Philippine society that those of us more familiar with Eastwood and Greenhills know and care little about. From Macansantos, we can trace a line straight back to Bulosan, and even earlier to those first Ilocano expatriates whose stories will forever lie unspoken, because they did not have articulate grandchildren to record and relate them.

These narratives are laden with violence – sons get killed in foreign wars, an uncle vanishes in the wild, a younger brother dies in infancy, the father is imprisoned and then the daughter herself – but the author deals with pain with a stoic evenness, even tenderness, rather than the hysteria that a younger or less collected writer might have employed.

I will probably be grossly generalizing here, and this will be something you’ll never hear in your classes in postmodern theory, but these pieces offer proof in support of my old-fashioned suspicion that age and maturity will do something for your writing that no amount of schooling, reading, or moving around the world can. The refinement of sensibility, the composure of voice, the acceptance of life as it simply is – all of these come with time and the ineluctable reasoning, the balancing of thought and feeling, that come with time. Of course, for some, like Pepe Smith, that kind of mellowing never happens, and perhaps rightfully so. For others like us, it’s a state of grace we can only hope to attain, and I feel that Precy Macansantos has reached it with her project.

In this collection of essays, the author reflects on her life and times, including those of family members, whose lives were marked by departures from home, hometown and homeland.  Woven into the fabric of individual lives are events and “upheavals” in history – the peasant unrest in the early 20th century, the war in the 1940s, martial rule, the 1990 Luzon earthquake, and the 2020 pandemic – leading to departure and separation. Macansantos writes with candor and melancholy, though not without  hopefulness, because memory bears many gifts, including understanding and insight, and possibly, healing.

Priscilla Supnet Macansantos writes poetry, nonfiction and fiction in English, Filipino and Iluko, her native language. She has won prizes for her poetry from Home Life and Focus magazines, and was awarded for her essay “Departures” in the 1998 Don Carlos Palanca Awards for Literature. She was head of the NCCA (National Commission for Culture and the Arts) Committee on Literary Arts from 2011 to December 2013, and was Chancellor of the University of the Philippines Baguio until April 2012. She attended Creative Writing Workshops held by the University of the Philippines and Silliman University in Dumaguete City.  She has also served in the teaching panel of the Cordillera Creative Writers’ Workshop, the Western Mindanao Writers’ Workshop, and Lamiraw. She is a member of Philippine PEN, and holds a PhD in Mathematics.