WHAT COUNTS by EILEEN R. TABIOS 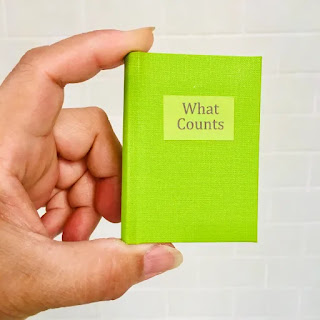 What Counts by Eileen Tabios

[First published in THE MICROBIBLIOPHILE: A Bimonthly Journal

about Miniature Books and the Book Arts, July 2021]

It was the German-born British economist E. F. Schumacher who popularised the term “small is beautiful” although the actual phrase came from his teacher Leopold Kohr. A counterblast to “big is best”, it has come to represent the belief that things of a smaller scale are more aesthetically pleasing than those of a larger scale.

A miniature book is a very small book. Definitions regarding measurements have changed over time. Today, most collectors only consider a book to be miniature if it is 3 inches or smaller in height, width, and thickness, particularly in the United States. These books have a long history. Starting with cuneiform tablets that go back thousands of years they include medieval Books of Hours, books for miniature dolls’ houses, Bibles, encyclopaedias, almanacs and children’s stories.

Now to the review: let’s begin by looking closely at the opening sequence because it is the key that unlocks the whole story:

One plus one equals two, says the child.

One plus one equals eleven, says the artist.

But the best answer of all, says the sage:

One plus one equals you and me!

The first sentence is to do with math: counting. The second one is visual (two number one’s side by side look like an eleven): ‘seeing is believing’ – or verification. The last one is all about what really matters in life: insight, recognition and understanding. Tabios uses these three sentences to construct the framework of her story which is a model of inventiveness.  It is a story about a couple, Thomas and Susie, who try to collect enough miniature books to qualify for the Guinness Book World Record for Most Miniature Books. In the process, they learn “what counts.”  The three opening sentences are repeated at the close. Structurally, it is a satisfying conclusion. A Q.E.D, "quod erat demonstrandum", would not look out of place at the end to show that the argument is complete. 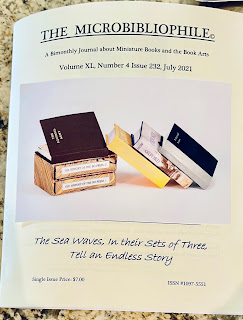 The story satisfies in more ways than one. If you look up the word ‘count’ in Roget’s Thesaurus you will find the following synonyms: esteem, judge, check, list, matter, number, score. Like light flaring off a prism, the nuances of all these synonyms are explored to a greater or lesser degree in Tabios’ story helping to give it a real sense of completeness.

If we take another look at that opening and closing sequence and focus in on the second line we see how the artist has viewed one plus one as being eleven and not two. One of the beautiful things about art, and I am talking about art in its broadest sense, is the way in which it disentangles itself from logic and thinks outside of the box giving a wider interpretation to our rather narrow view of the world.

One last thing, in a cheerful background note, the author informed me that as she wrote the short story she had it in mind to make each sentence or paragraph contain a number and, even though by her own admission, she did not fully succeed in the attempt, that initial desire informed the piece.

Bibliophiles will love it!