THE CONQUERED SITS AT THE BUS STOP, WAITING by VERONICA MONTES (1) 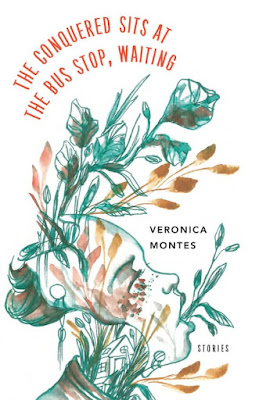 THE CONQUERED SITS AT THE BUS STOP, WAITING by Veronica Montes

Veronica Montes was born in San Francisco and raised in Daly City. Her collection,  Benedicta Takes Wing and Other Stories, was published by Philippine American Literary House in 2018, and her work has appeared in Bamboo Ridge, Prism International, Contemporary Fiction by Filipinos in America and Growing Up Filipino as well as many online journals.

The stories here, some a mere paragraph—like the stunning opening piece that gives the volume its title—and others, a few pages long, are snapshots of women in distinct stages of their lives. Drawing upon allusions to fairy tales, myths, and the supernatural, they combine to create a portrait of women navigating their relationships, bodies and sexualities under patriarchy—from resentful, stressed mother and wife (in “Lint Trap”), to a daughter grieving the loss of her father (“Interlude: Ocean of Tears”), to a teen lost to the heady experiment of first love and desire (“Ruby”).

To my mind, the book tells backwards the story of how an Everywoman, “the Conquered,” ends up at that bus stop, waiting, “covering her eyes.”  In “The Sound of Her Voice,” a modern retelling of Hans Christian Andersen’s The Little Mermaid, the narrator has lost her voice to a husband who bullies her into silence and reduces her to ridiculous gesturing: “You’re driving me fucking nuts, he said.” Doing a fourth load of her family’s wash, the narrator of “Lint Trap”  ponders the uses of all the lint she’s collected from the dryer: “to muffle her screams, to plug her ears, to cushion her long and graceless fall...” “The Man Who Came from an Island Where Everyone Knows How to Sing” describes a woman confident in her sexual desires but stinging from the loss of her “secret,” “this scratch-and-sniff boy, this all-you-can-eat buffet boy.” In “The 38 Geary Express” Montes creates a harrowing and creepily casual story of a stalker following his young prey through her afternoon. And finally “Ruby” describes a mother watching her teen daughter flirt with her first boyfriend then leave in his car, knowing she has lost her girl to “another creature altogether, blind and groping and fettered to an enormous, feral love.”

The heart of the collection is “Madaling Araw” (Tagalog for dawn), its allegorical and most direct indictment of male power. The story opens with her waking, “unsurprised, on a bed of crushed glass.” The “she” here could be all women, one specific woman, Mother Earth, the motherland herself. As she notes:  They were always doing shit like this. She walks to the lake to cleanse the glass shards from her body, then searches for the herb her mother had shown her to dress her wounds. She admires “her own brown skin, the knots of muscle, every scar and scab,” then stands to face her tormenters triumphantly: “their pale hands flexed, their hearts thrummed with the knowledge of their wrongdoing.” She spits at them, and they flinch, and she, undeterred, continues west, “wondering what they would do tomorrow and the next day and the one after that. Blood trickl[ing] between her shoulder blades.” This direct repudiation of violence against women and Madaling Araw’s fierce resistance embodies on so many levels the struggle for decolonization and power that Pinays historically and throughout the diaspora fight daily.

Madaling Araw’s triumph and grit, echoed in each of the stories in this potent, lyrical collection, will inspire and haunt you. And that’s a good thing.

Melinda Luisa de Jesús is Associate Professor of Diversity Studies at California College of the Arts. She writes and teaches about Filipinx American cultural production, girl culture, monsters, and race/ethnicity in the United States. In Spring 2019, she was the 2018-2019 Muriel Gold Senior Visiting Professorship at the Institute for Gender, Sexuality and Feminist Studies at McGill University in Montreal.She is also a poet, and has published five chapbooks Locofo Chaps/Moria Poetry in 2017: Humpty Drumpfty and Other Poems,  Petty Poetry for Scrotus’ Girls, Defying Trumplandia, Adios, Trumplandia!, and James Brown’s Wig and Other Poems.  Her first collection of poetry, peminology, was published by Paloma Press in 2018.