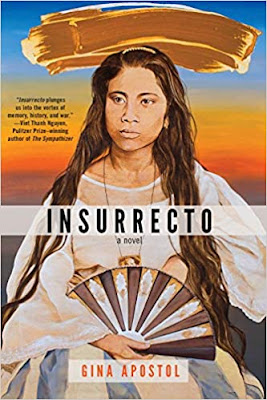 If history is written by the victor and said victor is usually a straight, white male from an imperialist Western country, such as the United States, then Gina Apostol’s Insurrecto is a bold response and reclamation of those buried histories of the Philippines purposefully forgotten by the West. In other words, the novel is an exemplification of what happens if the imperialized Filipina/x/o subjects can, in fact, speak for themselves. With this stated, the novel propels the widely overlooked conflict of the Balangiga Massacre out of the margins into the light of day, examining its lasting complications for the Philippines, beyond the context of the Philippine-American War. As such, the novel occupies a space that is part fiction, historical narrative, and contains moments that appear to break the fourth wall when it comes to commenting on the practice of writing and documentation.

Spanning decades and detailed through multiple protagonists, the dissecting of Philippine and American relations, an imbalanced and complex dynamic of resisting colonized Filipinos versus the brutal and barbaric American colonizer, is exposed. Via Magsalin and Chiara’s strained relationship as Filipina translator and American movie director, the act of uncovering the events of Balangiga becomes a toiling feat of revivification and self discovery for both women. Through layers and layers of references, jumping from Chiara’s script to Magsalin’s plot for a mystery novel, and juxtaposing point of views from both women and other characters, the horrors experienced during the 1901 conflict are laid bare. Yet despite how laden with information and pop culture references that emphasize the globalization of American ideology and its permanent effects in the Philippines (and other colonized nations), Apostol refrains from providing concrete verdicts on whether this century long entanglement is a positive or negative thing. Instead, she allows those jarring and vivid details to speak for themselves, leaving the audience to come to their own conclusions about the matter. Though it is worth noting that the Library of Congress images of the Balangiga Massacre that are described at great length lines the inner cover of the book, which is gut wrenching to examine for too long. (Trust me!)

Frankly, Apostol’s novel leaves the audience little room to breathe as its multitude of threads spill out across each chapter, constructing a web so multifaceted and detailed, it’s easy to dive in and become disorientated. However, if one considers how frequently the past and ongoing conflicts are an inseparable cause-and-effect relationship, the relentless jumping through time to note various aspects of Philippine-American history makes sense. Furthermore, the act of revealing this moment in history and its continuous reverberations is a strenuous feat that’s only accomplishable by Apostol’s overwhelming achievement that is this timeless novel. Though all of the answers concerning the overall plot and its parallel subplots aren’t provided by the conclusion of this text, it is up to you, the reader, to read between the lines and be the interpreter. So, be prepared to explore or reconnect with the horrors lurking in these pages, waiting to be held in your gaze and consciousness!

Joanna Anabo is an educator by day and an MFA Candidate in Poetry by night who still believes her poetry is just okay. Born in the Bay Area, she is a first generation Filipina-mestiza whose work celebrates her heritage and functions as catharsis for her lifelong identity crisis as a mixed individual. She has read at a quite a few places and plans to actually use Submittable in 2021.