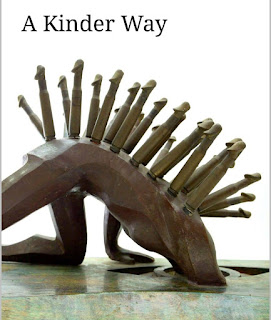 (Cover image of a 2012 sculpture by Toym Imao: "Phallus The Leader")

To pluck a chicken's innards and to contemplate on what divides between fortune and despair---who could imagine that with the poet's permission to be absorbed, dazzling thoughts could simmer from his sense of everyday? It took an introspective eye and a certain familiarity with words "flowing limpid over pebbles and sand" to provide what gustatory satisfactions hardly assuage. In this time of aloneness, worsened by scorching dungeons and news of suppression one after another, we need a poet's consolation. Niccolo Vitug, attuned to the cadence of memory and desire, brought to the table what our souls long to savor: brevity and impact, remnants of a prayer once uttered. While "between trees are possibilities", there was this soft-spoken yet authoritative voice between the pages of this chapbook. How I wished for more poems of his was tantamount to how consoled I've become by his recollections of roles he accepted to play: son, teacher, lover of bodies and environs. More than a "score of a mortal dirge", this collection was, of course, a sweet prelude to his constant search for spiritual nourishment, which could suffice all forms of hunger.

From A Kinder Way, a sample poem:

Forgive me, chicken, emptied inside and out.
I had to pull your limbs and break your joints
as I cut you up for adobo. Too much stewing
might make people think all things are theirs
for taking and using, like language,
which leaders use to threaten people
even when stomachs force them to jump lines
and scream for relief. Statements have led
to many dying on the streets, arms stretched
or tied together, suspects of peddling substances
that prevent compliance, which might be means
of escape. The next time I cook or consume,
may I do it in a kinder way, at least with words
of thanks for lives that give way for mine. 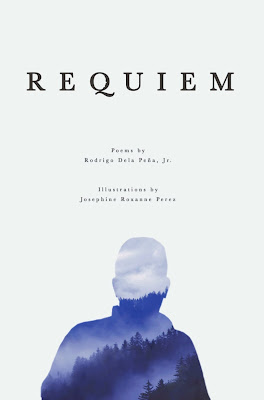 "Dear necessary loss"---were these words the conclusive argument resonating in the poems? We were struck by the prevailing ambivalence, not because we were assured that the persona preferred declaring genuine freedom to mourning over the loss of a father, but because we were vicariously confronting some phantoms that chose to linger. When Dela Peña, a poet attuned to diverse tonalities, introduced his father as a "custodian of failed fever dreams", we knew that a relationship forged from a remote past had to be reminisced in order to unburden. Then came the therapeutic function of poetry. Not only was this chapbook, published in 2015, a tribute "to the losing hand he's dealt" but also a mellifluous confrontation with the self, his long-lived nemesis. This was facilitated by metaphors utilized with seductive restraint: the bed that drowns one to sleep, inventory of hospital images, and impetuous butterfly wings. He likened himself to a mythical beast and then questioned their comparability. (Isn't questioning, of existences and imaginings, a poet's increasingly important obligation?) And we will be left fixated on the vividness of a dreamer's encounter with the sun, for sooner or later we'll meet "eyes flooded with morning's light". Now, in our mundane yearning, we choose to cry.

From REQUIEM: a sample poem:

Now That My Father Is Gone, I See Him

everywhere: faces of strangers on streets,
passengers on buses and trains during rush hour,
his eyes rheumy and jaundiced, his gaze faraway
as though looking into a future where he would
have disappeared, I hear the rasp of his voice in snatches
of conversation, the drill of steel on concrete,
the gravity of his silence, I feel his presence
in rooms, in trees shedding their leaves, brown and crinkled
as his skin, the swoop and swerve of birds in unison,
the breathless moment when the sun burnishes the sky


before the world falls into darkness. 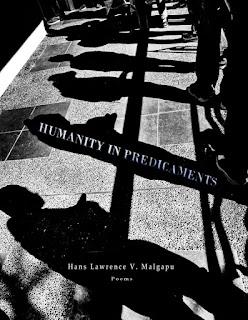 "Lose all the bliss" - this could be the poetry collection's overarching attempt. With the least intention of spoiling future readers, I'll share an interesting pattern. Malgapu starts with recollections of moonlight and tender weather enveloping introspective onlookers: "We were once flesh: tabernacles of warmth". Then he proceeds with a working man's apprehensions of a country's receding morale. The persona scans the drama of the war on drugs, with a voice by turns intimate and contextual. After "a crescendo of knocks" comes a wailing mother captured by distant lens, and "a black body bag will shut the remains of this day". Finally, the poet will be struck by a realization that what he can only do "while lit by candles and fluctuating lights" is to trust in the beauty of the inevitable. But this pattern must not be perceived as poeticized surrender. Between lines and pages is a scribe unforgiving in his celebration of surfaces. It is through these topcoats and initial glances, this "chasm filled by secondhand smoke", that a lover of verse can enter into the depth of things. Most of the poems here are introduced by slices of childhood joy, and the reader will be carried away by the turn of metaphors. Innocence turns into sensitivity. Taste of freedom turns into embrace of restraint. Jumping on puddles turns into a narrative of eternal escape. Through his poems that resonate his inclination to companionship, Malgapu also pays tribute to his heroes, the ones who taught him what a trembling hand and a robust mind can bring to the table: not bottles of beer but ruminations on imagined immortality. With catchphrases borrowed from either the classical or the esoteric, poems such as "The Dumpster Child", "Troubled in Paradise" and "Prometheus, Rebound!" have become my personal favorites. Read the book available on Google Drive, savor it, "watch it squirm, then sell its soul."

*****
Since 2016, Aloysiusi Polintan has worked as a Senior High School Principal in Divina Pastora College. He started scribbling poems and essays when he was 17 years old. These poems are still kept in a notebook and wait to be revised for future publication. This notebook will be revived and will give birth to language already "lived." That is why his blog is named "Renaissance of a Notebook," a blog of poems, personal and academic essays, and flash movie reviews. His book reviews, which are published and featured in The Halo-Halo Review and Galatea Resurrects, are also to be found on the blog, under the series title "Mesmerized." He believes that the ability to judge or critique a literary piece starts with the reader's being moved and mesmerized by the artful arrangement of words articulating some longing for freedom and individuality. He's now working on a manuscript of 50 poems, with a working title of Brittle Sounds.