OF COLOR: POETS' WAYS OF MAKING edited by AMANDA GALAN HUYNH and LUISA A. IGLORIA (1) 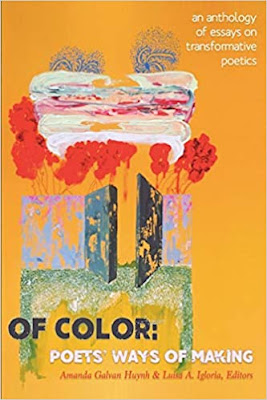 Of Color: Poets’ Ways of Making, An Anthology of Essays on Transformative Poetics edited by Amanda Galvan Huynh and Luisa A. Igloria

Other words for transformative—life-changing, cathartic, reframing—can be used to describe this anthology of essays from poets of color on writing process and craft. Issues that BIPOC poets persistently grapple with are deeply and thoroughly explored: How do we think about literary lineage and mentorship? How do we write rooted in the struggles of our families and communities? How do we heal our individual and collective traumas even as we are asked to either perform or justify them on the page? How do our oral traditions relate to the written word? And what of the other languages that still permeate our dreams?

As a practicing BIPOC poet, I appreciate how editors Amanda Galvan Huynh and Luisa Igloria have created a space from which we can hear our literary aspirations and considerations reflected back to us. It is a task that is both immense and practical. Igloria writes, “For minority poets not considered part of the mainstream because of the combined effects of their ethnic, class, racial, cultural, linguistic and other identities, what should change in order to accord them the space and respect they deserve? How best can they discuss with and pass on what they learned to others?” In her foreword, Mai Der Vang sums up this endeavor beautifully: “I am moved by these poets who give of themselves in these essays as a way of honoring each other, their communities, and their shared labor with language.”

As BIPOC poets, it is often up to us to summon and even fight for the mentors and teachers whose guidance and acceptance will allow us access to as many parts of ourselves on the page, and not just what a mainstream, white-dominated readership can easily digest. Addie Tsai articulates how much an MFA cuts both ways, how though it has “transformed my relationship to craft in a profound way, I was also transformed by the way in which I felt my body as a poet of color erased, made invisible… explicitly directed to change course as to not make the white bodies—both students and faculty—uncomfortable with my foreignness.”  Tony Robles reminds us that though we often have to explain our desires to study poetry formally to our immigrant and working-class families, we also find in them our first lessons on artistic craft and care, and thus our first teachers: “Thorough and fluid, his mop strokes were lines, were art—communicating an intention that lived in his core that would not accept anything less than the truth. … it could easily mean do not lie, do not deceive, do not take for granted the time or attention of your reader.”

And yet, this turning towards our families and communities also comes with a reckoning, a realization that a BIPOC poet’s literary self-education is often complicated by trauma that runs through the wellsprings we seek. Abigail Licad’s piece on being a Filipina American poet who has started writing publicly of her disability pulses with courage and clarity: “Should my parents confront me about breaking the silence they themselves have practiced, I already have a response prepared. It’s not my fault. It’s not your fault, either. But it is your fault that I’m not a coward.” Sasha Pimentel’s essay confronts the effort it took to be open to other APIA writers, because “…I sighted too quickly my own vague face, so wanted to reject them because I’d confused their art with my own shuddering, my family.” Pimentel’s included (and inclusive) reading list, “Sasha’s Incomplete List of Writers to Turn to, For Other Lonely Children,” is poignant and hopeful, a rich starting point for readers and students of poetry to immerse in.

In a conference, I once heard a Pulitzer-prize poet say “your audience is your politics.” I love how Wendy Gaudin’s essay complicates the notions of poetry’s audience and readership and deftly entangles it with the healing she must generate for the women in her family: “In history, men like my great-grandfather are culprits… In poetry, they are listeners—a captive audience—receiving criticism, receiving forgiveness, receiving a focused, dynamic attention from those they never acknowledged. In poetry I can say, Whether you saw her or not, she was there. Whether you hear me or not, I will speak.” The fire and compassion in this essay is in conversation with Melissa Coss Aquino’s piece that recognizes the difficulty of aiming for “the tiny space where we manage to tell the truth without enacting stereotypes long used against us, but sometimes our truth feels like a long list of stereotypes no matter which way we turn.”

While weaving in and out of other languages and often in varying fluencies, is something BIPOC poets have always intuited as enzymatic—i.e. bringing new energy and nuances to their own poetry, the implications of having to translate our experiences and tongues are also constantly wrestled with. Ernesto Abeytia’s essay reclaims the self by welcoming this collision of languages, “I want my poetry to work with and against Spanish and English to offer the parts of myself that can’t be shared monolingually.” Huynh in her editor’s introduction offers an impassioned argument, “But why should we even italicize our bilingual and multilingual experiences? Is it too difficult for readers to imagine our double consciousness?” José Angel Araguz recognizes the work it takes to live with this double consciousness, how “…the weather of being a poet raised in the United States, informed by literary traditions in both English and Spanish has been one filled with movement. Over time, I have learned to accept of the state being unsettled.” For Ching-in Chen, this very dynamism carries possibilities, “Because to never feel whole/grow the landscape in front of us…”

Giving BIPOC writers the permission to be unsettled must be coupled with the call to actively resist oppressive systems that permeate much of contemporary American society, including its poetry. Luisa Igloria, in her editor’s introduction, articulates the collective wish expressed in this collection—“that writers of color find ways to gain strength and visibility without replicating the systems that play the game of divide and conquer and turn us against each other for narrow or self-serving profit.”  Ocean Vuong amplifies this wish when he intones that “I never wanted to build a “body of work,” but to preserve these, our bodies, breathing and unaccounted for, inside the work.” Kenji Liu puts forth a new creature that can counter the monstrosity of “capitalism, white supremacy, heteropatriarchy;” a creature that is a “monster of compassion and ferocity,” and birthed from it, a “frankenpo,” which is a “feral, generous poetry arriving from the future we are always being blown into.”

The passionate BIPOC poet-guides in Of Color invite its readers to engage with their own work in ways that are life-giving and soul-affirming, and thus nudge contemporary American poetics towards what Khadijah Queen calls a “radical poetics of love,” one that “pushes the difficult and problematic thoughts out into the open, where they can be honestly examined, and hopefully, an evolution toward loving and true solutions can occur.” This complex and difficult work is worth our energies, what Tim Seibles describes as “subversive to the exact extent that the surrounding culture denies the primacy and abiding complexity of our emotions.” When Remica L. Bingham-Risher narrates the devastation of losing a childhood friend shot by the police, one of the countless victims of systemic violence against Black bodies in this country, she articulates the freedom and hope that we are all struggling towards, “…how important it is to be free to say what I’m afraid of out loud, to dispel it; to show my children, that even in unimaginable times, we can create our way out of fear.” Into this circle of creation and solidarity, BIPOC poets are invited to add their voices, and into the page that Craig Santos Perez affirms, “is never truly blank. The page consists of submerged volcanoes of story and unfathomable depths of meaning.”  Of Color: Poets’ Ways of Making is a necessary and urgent read for all poets who want to imagine a kinder and bolder world into being.

Karen Llagas is a recipient of a Filamore Tabios, Sr. Memorial Poetry Prize, a Hedgebrook residency and a Dorothy Sargent Rosenberg Poetry prize. Her first collection of poetry, Archipelago Dust, was published by Meritage Press in 2010.  Her poems have appeared in Rhino Poetry, Crab Orchard Review, the anthologies Troubling Borders, An Anthology of Art and Literature by Southeast Asian Women in the Diaspora (University of Washington Press, 2014), The Place That Inhabits Us: Poems of the San Francisco Bay Watershed (Sixteen Rivers Press, 2010), Field of Mirrors, (PAWA, 2010), among others. Based in San Francisco and Los Angeles, she lectures at UC Berkeley and works as a freelance translator.