The Halo-Halo Review is pleased to interview authors in the aftermath of their recent books’ releases. This issue’s featured writers include Jean Vengua. 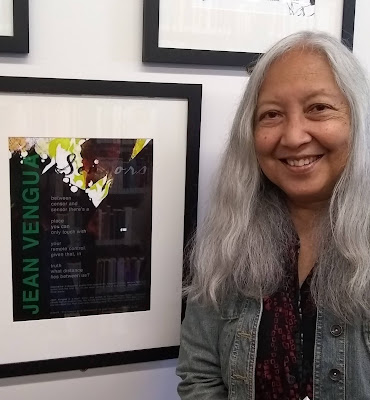 Marcelina: A meditation on the murder of Cecilia "Celing" Navarro. This is a slightly revised reprint, in chapbook form, of the long poem first published in 2000, in Babaylan: An Anthology of Filipina and Filipina American Writers, and co-edited by Nick Carbo and Eileen Tabios. 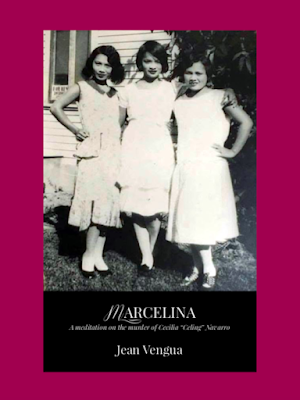 The responses, this time around, have been few (so far); however, they refer positively to how the work addresses the suppressed and "buried" history of pinays in the U.S. during the early 20th c. I'm surprised that I have not received  any outright criticism or "pushback" about the strong material presented in the book; I'm glad about that, but I still wonder if that will emerge at some point. If it does, I'm ready for it. I look forward to a post-Covid world where I can do a reading from this book, in person, and discuss it with a wider audience.

During the filming, I was able to meet many members of Celine Navarro's family (descendants of the children she sent to the Philippines before she was murdered, and also her surviving sisters' children). I attended the long-awaited memorial service they had for Celine. This was quite moving, and I felt really honored to have that experience.

What are you working on right now.

I've been mostly working on my visual art, and what I'm calling the "Geomancy" series -- drawings in graphite that focus on the visualization and "reading" of earthly and imaginary topographies. However, after the experience I've had with "Marcelina," I'm also thinking again about the research I did on early 20th c. Filipinx newspapers published in the U.S.; I'd like to continue writing about pinays who lived and worked here during that period, because I think there are a lot of stories from that time that need to be told.

Jean Vengua is a Filipinx American poet and visual artist, author of Corporeal (Black Radish Books), Prau (Meritage Press), and The Aching Vicinities (Otoliths Press chapbook). With Mark Young, Vengua co-edited the First Hay(na)ku Anthology, and The Hay(na)ku Anthology, Vol. II. As co-publisher of Tulitos Press with Elizabeth H. Pisares, she published/edited the Debut: The Making of a Filipino American Film by Gene Cajayon and John Manal Castro, and The Flipside, by Rod Pulido. Jean was born in San Francisco and lives in Monterey, CA. Her art and writing can be viewed at jeanvengua.com