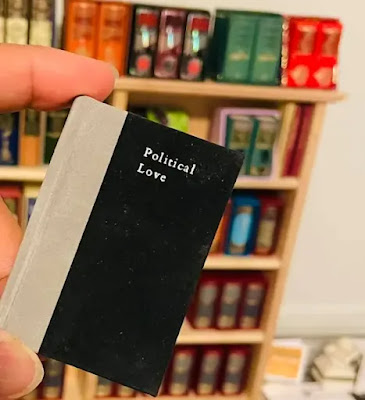 [Previously published in The MicroBibliophile]

‘Political’ is an adjective related to policy or government and ‘love’ is a noun whose meaning can range from mere fondness to a devoted attachment to another person. Marry the two words together and you get a collection of 15 poems by author, poet and editor, Eileen R. Tabios.

We are all familiar with words like ‘cupboard love’ and ‘puppy love’ or its alternative ‘calf love’ but what is, or could be meant by, ‘political love’?  If pressed, some politicians will say that they have entered their profession because of a genuine love for their country and a real desire to improve the lot of the ordinary man and woman in the street. This is, of course, commendable. On the other hand there are others who have a love of power and we all know what happens then: absolute power corrupts absolutely. They have a vaunting ambition and, like Icarus, fly too close to the sun. ‘Political Love’ presents poems at the intersection, if not collision, of love and politics.

In the opening prose poem, ‘Queenie’ Tabios leaves us under no illusions about how she sees through the charade of rich people in high places: ‘never ever admire billionaires for charity donations – it’s a form of their self-defense.’  In the same poem she references a miniature book called ‘J Smith’ by the cartoonist Fougasse from the library of Queen Mary’s famous Dolls’ House. This charming and beautifully illustrated story tells the magical tale of a fairy blown out of Fairyland by a storm into 1920’s London. To Tabios, it ‘provides evidence of how ‘fairy tale’ is euphemism for ‘abuse’ Parse it closer and it becomes euphemism for ‘grief.’’ Although the storyline is delightful, there is an ominous background insofar as C Kenneth Bird (1887-1965) took the name Fougasse from a First World War mine and was known for his series of posters ‘Careless Talk Costs Lives’ (politicians note!) which served as a reminder to people living through the Second World War to be careful of what they said in public for fear of being overheard by the enemy.

Sometimes it is left up to poets and activists to speak out against political injustice and some are brave enough to make sure that they are heard. ‘Blue Meta Pain’ is dedicated to İlhan Sami Çomak, a Kurdish poet from Karlıova in Bingöl Province in Turkey. He was arrested in 1994 and charged with membership of the banned PKK Kurdish terrorist organization. In jail, Çomak has released eight books of poetry and become one of Turkey's longest serving political prisoners.

‘Everyday New Year’s Resolution’ is stoic optimism in nine lines. It is a stoicism that has to be maintained for every day of the year:

The end of a year

should raise our chins

for we are not

in the business of dying

until we are dying

to land on us.

The longest poem in this collection, ‘Nonnos 28: Cyclops Demigods Fight the King of India’s Army’ is a translation from Tales of Dionysus: The Dionysiaca of Nonnus of Panopolis, edited by William Levitan and Stanley Lombardo. The translation by Denise Low is cast in nine parts with italicised commentary written in tankas by Eileen Tabios that offer asides, not unlike a Greek chorus.

The primary models for Nonnos were Homer and the Cyclic poets; Homeric language, metrics, episodes and descriptive canons take centre stage in The Dionysiaca whose main theme is the expedition of Dionysius against the Indians. The translation describes the scene chronologically: the two sides, Greeks and Indians parading to battle, the Fates who shadow the battle, the fall of heroes, the one-eyed giants who join in the battle, the wounding of the King of India, the defeat of the Indians, the sound of deadly music and a chorus of Fate’s song. The tankas ‘translate’ the poem into a story of our time for human nature is as old as history and will not change. The poor and the powerless are regarded as worthless currency and

(a president in my time),

Like Nonnos’ own style, the language of these tankas is unrestrained.

Politics can force people into exile. ‘Losing Music’ is a sustained elegy on lost innocence which can also be read in terms of exile.

‘Settlers’ is a poem about the author’s attempts to build a home for owls. Taken at its face value it demonstrates how out of tune we are with the natural world. Much more than that, it can be read as a modern fable on the human level: a country wanting to do its best to welcome migrants while failing to address their basic needs.

The politics of climate change is never far from some of these poems. ‘Smoke Taint’ with its reference to the forest fires in California, ‘Halcyon Days in the Anthropocene’ and ‘Melt Up’ with its focus on global warming are all stark reminders of our fragile world and the lack of political will to do anything about it other than issue a series of bland statements about ‘targets’ which are rarely, if ever, met. As Tabios points out in ‘Melt Up’:

we were to think fate

is something we can control –

If only we knew then

what we know now –

Such is the importance of love. And what of the politicians? They are referred to in this collection as being ‘fat-bellied’. The profession is also mentioned in ‘Flower Poem’ in the form of a ‘public service announcement’:

when it comes to nature versus nurture, nature is implacable as a politician is compromised.

In ‘Kapwa on Covid’ Tabios reasserts her love for humanity and inclusivity. Kapwa is the Filipino indigenous trait of interconnection among all creatures and all things, across all time. It is a serious statement written in a light-hearted vein taking a quotation from Rudyard Kipling’s poem ‘If’ as its starting-point. I had a framed copy of this poem on the wall in my playroom when I was young. No doubt my parents thought it would be a good way to instil some wisdom in me at an early age. Tabios, too, it seems, seeks wisdom from literature. In the final poem, ‘If Love, Then Love’ she writes:

All I need are books.

Every word in action becomes beautiful in the light of its own meaning.

When I read, no one is after me. When I read, I am the one who is chasing, chasing after God.

This is a fine collection that seeks to explore power, politics and love. Sometimes these elements work for the common good but often they fall short through human weakness and greed and it is the poorest in society, those in most need, who suffer as a result.

For bibliophiles with a particular interest in collecting miniature books, I should mention that this collection is handbound in black and grey faux-suede with hand-marbled endpapers by Steve Pittelkow and printed on a canon inkjet printer on a fine 20# paper in a limited edition of 200 numbered copies.