This Feature presents readers sharing some love about the talent of Filipino writers and artists. We would welcome your participation. This section is for readers. You don't have to write "like a professional," "like a critic," "like an intellectual," "like a well-rounded reader," etc. Just write honestly about how you were moved. Live writers and artists (let alone the dead) don't get to hear enough from others who engage with their works (some may not even know all who comprise their audience). To know someone read their stories and poems or appreciated their artistry is to receive a gift. Just share from your heart. It will be more than enough. DEADLINE: NOV. 15, 2022 for Issue #14. Duplications of authors/artists and more than one testimonial are fine.

Greg Sarris, author of the new memoir, Becoming Story: A Journey Among Seasons, Places, Trees, and Ancestors (Heyday Books, 2022), is Filipino, Pomo, Coast Miwok, Jewish and is the Tribal Chairman of the Federated Indians of Graton Rancheria.  He is also the author of Grand Avenue, Watermelon Nights, How a Mountain Was Made, Mabel McKay: Weaving the Dream, Keeping Slug Woman Alive and other publications. 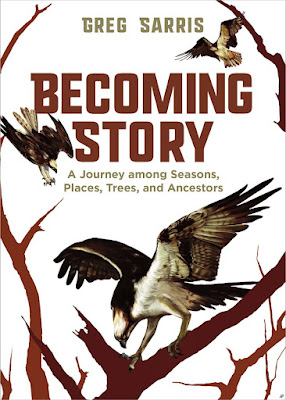 I soon found myself attending his public talks/storytelling about local indigenous history and his often mention of the Manongs that were often part of indigenous life in these homelands.

Greg's Filipino grandfather, Emilio Hilario, was married to Reinette Smith Sarragossa, who is the daughter of Emily Stewart (mixed blood)  and Tom Smith, a Pomo and Coast Miwok medicine man. His biological mother, Bunny Hartman, Jewish, died after childbirth and Greg was adopted by a white couple in Sonoma County. He later discovered that Emilio Hilario, Jr., was the unnamed father on his birth certificate.  Greg's research into his Filipino genealogy led him to find many of his Filipino relatives in the Bay Area. I  came to meet some of these relatives eventually;  they are so proud to embrace Greg as their own.

In 2016, I invited Greg to be one of the keynote speakers at the Third Babaylan Conference in Vancouver, BC. In his speech, he talked about how Filipinos in the diaspora can make Home in the lands where we have settled...that we can be part of a moving history if we learn how to Dwell in Place.

Dwell in Place -- this phrase has been a beacon to my journey. Greg's stories about the Pomo and Coast Miwok peoples, the creation stories, the stories of survival and resistance against genocide, the shared indigenous future he envisions -- all of these stories/teachings are lessons I am learning to embody.

In his new memoir, Becoming Story, I hear echoes of the stories I've heard him tell over the years. His stories of Mabel McKay, of Grand Avenue being made into a movie by Robert Redford, of the Manongs who loved and married Pomo women, of Coyote as the village chief on Sonoma Mountain, of the Bear, Osprey, and other beings that live on the palm of God.  This is how Greg describes Tolay Lake  -- a valley surrounded by four mountains. The indigenous people know that they live on the palm of God; how they know that All is Sacred..

To know that the Land is Sacred. This is the thread that runs through all of Greg Sarris' writings. And I am grateful for all that I am still learning to embody so that I may live lightly on this Place, learn to Dwell deeply by slowing down, meandering, and wandering as I learn about all the beings I live with on Wappo, Pomo, and Coast Miwok lands and how we might ensure an indigenous future together.

As a writer, Greg often speaks of the importance of Wonder. Art and literature make us Wonder ... makes us humble and open; how wonder develops empathy... empathy as a prerequisite for connecting to everything.  He says that reading literature is itself a ceremony of healing. Listen to the rest of this talk here. https://www.youtube.com/watch?v=EU2n-5_JueE

I end this love note to Greg Sarris with gratitude and affection. I encourage all who read this to get a hold of his books or watch him online as he talk Story or do a lecture. We are all encouraged to become Story.

Throughout his poetic life, Nick Carbó has been skewering history and culture as they deserve. But that his espada ropera occasionally melts to tender lyricism reveals the huge heart that must be the saving grace of great poets. Despite the “burden of bodies”—that includes one of the 20th century’s great poems, “The Boy In Blue Shorts”—this poet still discovers “lemons dreaming their yellow dreams” and “flowers dancing flamencos in red dresses.” His poems enlarge their readers’ lives. We must respond fulsomely with nothing less than Love, a reminder I share as Nick has just released a long-overdue Selected Poems book, Epithalamion: New and Selected Poems 1990-2020, published by Milflores Publishing. I read this book in manuscript form and recommend it! 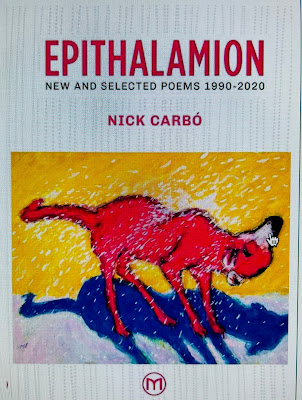