David Medalla, an artist whose open-minded output spanned participatory gestures and sculptures that created themselves, died at the age of 78. Curator Adam Nankervis, who was Medalla’s partner and longtime supporter, said on Facebook that the artist died in Manila.

Medalla was something of a cult figure until recently, with his pioneering sculptures of the 1960s mainly known to European curators and historians, who featured them in major biennials and surveys over the past decade. But a growing fan base also came to recognize the artist, who was known for cofounding a key London gallery in the 1960s, his role in a series of influential collectives, his writings, and much more, in addition to a practice that defies easy classification.

I knew the artist when he was 15 (or perhaps 19, depending on the source). He lived in a shack on A. Mabini close to the Luneta, Manila, Philippines. I was 16 at the time, a college student in 1957.

The shack that he called Le Cave Angely was made of boards. The door was often unlocked (at least the two times I went to visit). As you entered, there was a painting that he called “Crucifixion on the Sea.” It showed Jesus on the Cross in a kind of bay. There were fishes in the water at his feet. It was done on plywood with enamel paint and pebbles.  Beneath the painting were books. One of them was Walt Whitman’s Leaves of Grass. In the margins of the book were poems and notes written by hand, presumably by Medalla himself. He marked a famous line: “This is not a book; who touches this touches a man.” 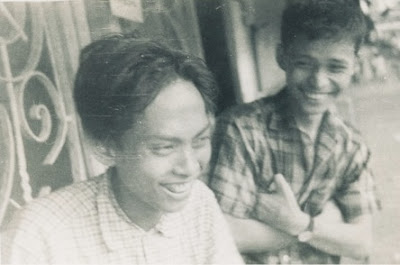 Medalla outside of Le Cave Angely, his famous shack in Ermita, in 1957

He was known as David Cortez Medalla. He used to hold poetry readings on Wednesday nights with some of the beautiful society people like Diana Jean Lopez and Cynthia Sun.

I attended one of his poetry readings in Sampaloc, Manila. He read his poem “Young Limbs.”

It was about, well, limbs. He compared limbs to Zhu Bei Hong horses and rose petals. He said it took him 6 months to find a metaphor for limbs. Somebody asked, It took you that long?  He read from T.S. Eliot’s “A Game of Chess” from The Waste Land, Juan Ramon Jimenez’s Fortunate Creature and Eugenio Montale’s Dora Markus that night. He said the English version of Jimenez that he read was his own translation.

Looking back, I must acknowledge my debt to him for having introduced me to those great poets. I was a young college student in Manila, a new arrival in the city, and the rare exposure to a poetry reading gave me the inspiration to explore the book stores and libraries. Can you imagine a teenager from the province being exposed to this kind of experience? It was mind-blowing and mind-expanding—the kind of experience that can change you inexorably and totally.  I started reading books by Jose Garcia Villa, Nick Joaquin, Rabindranath Tagore, T.S. Eliot, Nikos Kazantzakis, Albert Camus, Jean Paul Sartre, and Jack Kerouac and listening to poetry recordings at the British Reading Room on Recto Avenue and the Jefferson USIS Library in the Escolta. I still have Villa’s Selected Poems and New, with the rave introduction by Edith Sitwell, published in 1958, that I bought in September of that year for 13 pesos at the National Book Store warehouse on Arlegui Street.

Later in the year, he presented a reading of The Waste Land with popular society figures in black at the University of the Philippines.

I read somewhere that he and Jose Garcia Villa walked around the campus of Columbia University with the hand-painted iconic Third Eye on their foreheads. Most probably the idea, considered eccentric then, came from one of Villa’s Divine Comma Poems where he described “the, true, dark, Hero” as “He, with, the, three-eyed, thunders…”  One of Villa’s self-portraits shows him with 3 eyes. I think that was the time when Medalla was taking special classes as a student at the Ivy League university. He must have been 13 or 14 at the time.

The last time I saw Medalla in his shack at Mabini he had just come back from Ethiopia (Abyssinia) on a kind of travel grant associated with Arthur Rimbaud. He said he wrote poems after the Frenchman and that it was going to be published with a photo of himself posed like a statue: feet together, knees bent and arms raised together in front. I do not know if it got published because it was not mentioned in his bios.

But he did publish a magazine in the University of the Philippines where he answered questions about himself: his “terrestrial” and “celestial” addresses, his favorite poets (Dante, Walt Whitman and Jose Garcia Villa). He published one of his rare poems “A Psalm” in it:

The Lord is my Gardener.
He shall come to me

Standing in a desert

He shall come to me

And pluck the worms

And he shall send me

To drown my third

And soothe my sores.

I burst into songs

I read the poem and that’s how I remembered it from memory until now.

I saw him again at an art gallery in Ermita in 1968. In my memory it was Lyd Arguilla’s but I could be wrong. He and his partner had just travelled to Ceylon and they were wearing batik sarongs and white tunics. He was giving a talk about his travel to a small audience. They stopped over in Manila on their way back to London.  Sometime around this period, his kinetic sculpture was featured in a British movie: It was a kind of white blob floating in water, constantly changing shape.

His illustration, a line drawing of Sisa changing into a tree, reminiscent of Daphne in Greek mythology, appeared on the cover of Leon Ma Guerrero’s translation of the Noli Me Tangere.

Every now and then, at the millennium, I would read about his art installations at popular art shows in New York. As described by the New York Times, one of his creations involved a piece of cloth hanging from the ceiling and a bowl of needles and thread for anyone to embroider much of anything on the cloth.  One time there was a photo of his painting based on the Hindu Goddess Kali with an extraordinarily long red tongue. Except for his poem quoted above and the poem “Laughter in the Slums,” published in the mid-1950s in a Philippine magazine, I have not seen any poem under his name. I believe he dedicated himself to kinetic art and stopped writing poetry altogether. But who knows, perhaps he has poems written in journals and on the margins of books, and one day we may find them published posthumously!

Two 1957 Photos of Medalla and friends outside his Manila shack, Le Cave Angely: 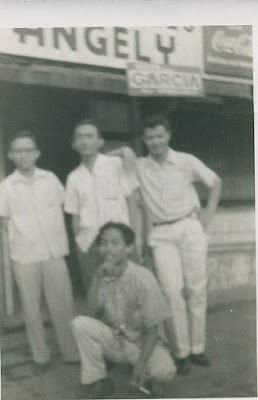 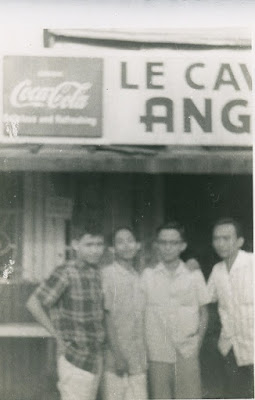