Wing of the Locust by Joel Donato Ching Jacob (Scholastic, 2020) 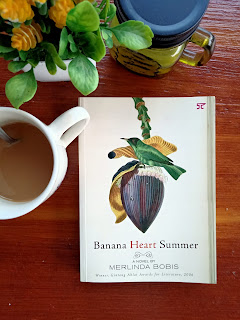 Flash Book Review No. 165: "Some sweet is always tucked into a sigh. I seek it, even now. I shred the tiny exhalation, be it elated or mournful, believing it is hiding there." In Banana Heart Summer (2020 reprint, Anvil), Nenita recalls how her keen interest in the infinite possibilities of chilies and coconut milk brought her to the many realizations a twelve-year-old girl was not fully ready to accept and conquer. How she missed the sound of her nickname, how she longed for Manolito's twin guavas, how she played complicit in the scandals of the street, how she despaired for the salvific smile of her mother who took her as a precursory plague, how she wished that eruptions were not part of one's childhood. . . . all these ruminations, juxtaposed with the myths and metaphors of local cuisine, evidenced to Merlinda Bobis's unquestionable knack for storytelling. Yes, poetry in the guise of storytelling. "You can never be sure about the destination of first love. Inside, it weaves its way to the core of that red fist lodged like a perpetual protest in the chest." The last novel I read that was told through a young girl—one who's all-profound, occasionally humorous and skeptic, but ever-hopeful for good and beautiful things—had to be Muriel Barbery's The Elegance of the Hedgehog. I felt the urgency of each strand of narrative, as it yields to the heartfelt reception of a reader whose only desire is that the story would not end. Even after closing the book, I clumsily savored in my imaginings the resilience of the author's people, withstanding the tragedies of the land and of the heart. I wish I could be like them. For sure, it is a resilient dream. 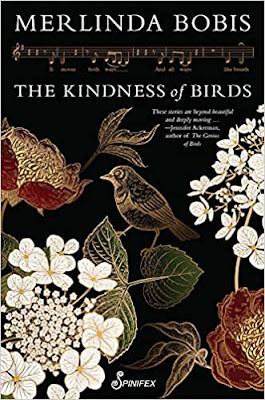 Flash Book Review No. 162: "Maybe angels are human birds or bird humans. Not celestial but planetary: of the earth, where we need them." The way Merlinda Bobis weaves words and song into exquisite depictions of kindness and man's primeval groundedness facilitates her status as a national, should we say intercontinental, literary treasure. Through her fiction, we are drawn to a truth of life, that birds—winged and transitory as they should be—and all the creatures we tend to ignore due to the complexity of our daily grinds, provide us the comfort and courage necessary in facing our moral and spiritual battles. The title story shows a young couple recognizing the ancestral wisdom of magpies, rosellas, king parrots, weebills and crows, and we will find out in "My Love, My Nerūsē" how the same couple sticks to this idea in the midst of a pandemic and marital upheavals. "My Tender Tender" and "The Air of the Times" are rich with metaphors so efficiently laid out, as if we were looking at a map abounding in pushpins and connecting yarns, its interpersions still astounding as a whole. Also among my favorites is "My Father's Australia" not only because it's truly textbook-worthy with its very much relatable subject, but also because Bobis strikes a beautiful balance between the story's autobiographical impressions and the book's tendency towards over-anthropomorphism (if there's such a term). Not to mention the allure of "strangeness of places" to make readers yearn for what is there in Australia and in Bicolano folklore, all the stories in this collection (2021, Anvil) are pieces of hope, things with feathers, reminding us that reading and writing are ways of memorializing, and eventually preserving, what we—individually and collectively—deem as true, good and beautiful. And the author leaves us wondering over this exhortation: "perhaps there's no such thing as extinction. Because we remember."

Wing of the Locust by Joel Donato Ching Jacob (Scholastic, 2020) 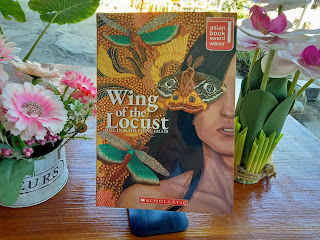 Flash Book Review No. 170: "There were so many things Tuan wanted to do, but he was paralyzed by the alien grip of tiny appendages." The moment I read the first chapter, I knew that I must be Tuan, and reading about his adventures on becoming what he was destined to be (and what he eventually chose to become) is like reading my imagined self, my alter-ego treading every crooked road and dangerous slope, always emerging beautiful and victorious. And the perfect image of who I have longed to become had come earlier than I expected. Muhen, whose hair "was blacker than the bleakest corner of shadow, and covered the right half of his face, like the bakunawa swallowing the moon", is teaching us restraint, humility, and a subtle kind of endurance. The present meets the future, and what lies between are landscapes teeming with wonders the loitering eyes could not fully comprehend, mothers and monarchs whose values made us question ours, and friendships filled with conquests of not only evils but also the effervescence of one's innate bravery. Joel Donato Ching Jacob’s Wing of the Locust (2020, Scholastic) let us enter a world we could not have imagined to be truly ours if the Spaniards were blind to the mystery of our islands. And as I closed this book, I left that world with a serene heart, bringing with me the assurance that life will undoubtedly go along with monsters and corruptive forces, and that my amulet is my attentiveness to the divine sound of the unnoticed. "More than your intelligence, my dear little bird, your well-trained song will keep you alive." I am not strange, I am not purposeless. With the music I choose to dance with, I will never be bereft of beauty. 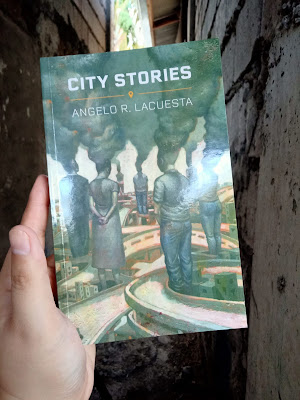 Flash Book Review No. 166: Most of the stories in the collection are familiar because I have read Angelo R. Lacuesta's three earlier collections, and I've always wanted to ask other readers, or the author himself, if he likes to be called a "city fictionist" or a "scribe of the cosmopolis". After reading City Stories (2019, Bughaw), it dawned on me that although geography is also a character—an aggregate of images alive and influential of the narrative's origin and destination—what's really unforgettable is the characters. I saw remarkable characterizations in "Moving Day" and "Triple Phantasy", as if I was observing in front each character's flinching and heaving. "How Mr. Kee Earned His Promotion" also stood out for its relatable take on what I usually see in foreign language films: dark humor contemplating on life's monotony and social injustice in its minutiae. In terms of effective use of language in bringing readers to the circuitous journey of the character's desires way beyond possession of objects and sight of ownership, "Self with Dog, 1997" is my favorite (I actually read this piece while standing in the kitchen, I just don't know if that adds to my adoration). Despite my preference for stories alluding to mythology and folklore, I enjoyed all the stories here, stories of men and women in the height of their careers, torn between generativity and isolation, between genuine intimacy and yielding to stability. "Stigmata", which I decided to be the last story to read, encapsulates the two resonant themes of the collection: a deep-seated yearning for liberation and the acceptance of its effervescence, and a call for groundedness with a good dose of the imagination. 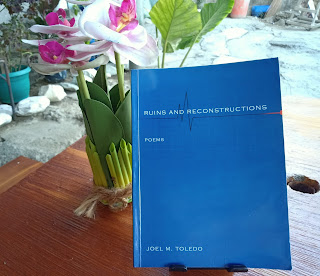 Flash Book Review No. 164: For me, Joel M. Toledo is the best Filipino poet writing in English today, bar none. His 2011 collection Ruins and Reconstructions (Anvil) is a reinforcement to that declaration. When a poem has dazzled you with a thought yearning for release, a thought you have not been aware of possessing—probably because you are yet to clear your path to language—and eventually inspired you to scribble your own, the poet is no longer a poet, but an auteur extraordinaire. Imagine reading one poem by Toledo, imagine a handful, and imagine a collection—you'll realize that language is larger than life, and it takes care and erudition to encapsulate it as you speak your mind. Your task now is to nurture that gift, like what he has done, "discerning / the sturdy from the breakable," and to let others know that struggle, grief and resilience are not just ideas given names but, more importantly, embodiments. The self extending to the other. One's grasp of words dispersing so others can pay it forward. "Every day I lose a potential / feather," says the persona in one of his poems, and this paradox of longing for flight teaches us groundedness, to look around the landscape, to stare and stare at the horizon, and to communicate to the world—with our silences and occasional hummings—our process of healing. Most of the poems in the book speak of how the natural world serves as mirror to our fragility. "[I]t is not / the ground shaking but / our bodies," and gazing at the brittle rays of morning light while we're stuck in our rooms would not go in vain if we are accompanied by words strung and woven to effect change of perspective or insistence of heart. Yes, poetry teaches me to insist on heart. 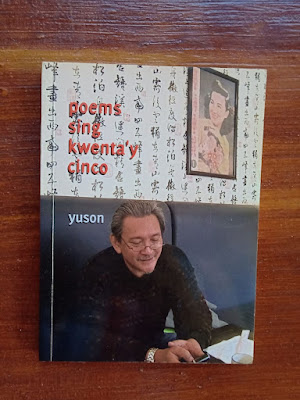 Flash Book Review No. 173: "Before the fiction / was the need for words," before testing the imagination's reach was the need for attentiveness to language—I have been fascinated by this fact about the craft since the start of 2022, and it just dawned on me, while writing this flash review, that I really have to spend the rest of the year in search of a voice while polishing what I would call my medium. Krip Yuson's Poems Sing kwenta y Cinco (2010, Anvil) is perhaps a lighthouse. Some of the pieces in this collection, such as "Rejection," "The Beach, Plus Pablo," and "Concealment," struck some chords in terms of how I look at this self-imposed necessity to explore poetic forms and how past attempts, futile ones they were, still signal a good start. The archipelagic nature of our homeland has become a resonant metaphor, for the poet's journey to transcendence is becoming more tedious: "Redeem now the islands / of our orphaning. / In fading light." But the poems speak of hope, and not of utter despair, a kind of hope that gives us a chance to rage and care and feel mostly exalted. We wait, within our imaginations, for our arrival, but little (though not late!) do we know that there is no place to arrive at. The poet is situated in the now, and the flutist must immediately signify. The fan fictions in our heads, our guilty pleasures and pet peeves, even the objects of our annoyances, are potential subjects, as long as language is ever claimed. This I learned from reading Yuson's works, both past and recent. No need "to wait for proper wind, / tug of heart" in front of a blinking cursor; the turbulent hours and days we face suffice for prompts.

*****
Since 2016, Aloysiusi Polintan has worked as a Senior High School Principal in Divina Pastora College. He started scribbling poems and essays when he was 17 years old. These poems are still kept in a notebook and wait to be revised for future publication. This notebook will be revived and will give birth to language already "lived." That is why his blog is named "Renaissance of a Notebook," a blog of poems, personal and academic essays, and flash movie reviews. His book reviews, which are published and featured in The Halo-Halo Review and Galatea Resurrects, are also to be found on the blog, under the series title "Mesmerized." He believes that the ability to judge or critique a literary piece starts with the reader's being moved and mesmerized by the artful arrangement of words articulating some longing for freedom and individuality. He's now working on a manuscript of 50 poems, with a working title of Brittle Sounds.
Posted by EILEEN at 12:41 PM