THE MANGO BRIDE by MARIVI SOLIVEN 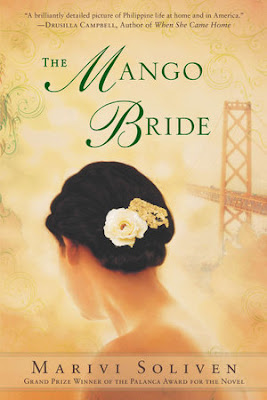 I grew up watching Filipino drama movies. This may be why Marivi Soliven’s The Mango Bride feels very familiar to me.

Many of the novel’s details feel familiar. Soliven’s images are sharp and bring to mind Manila and its joys and frustrations.  I can hear the street vendor announce his puto, taho, and balut. I can imagine the colorful jeeps weaving in and out of Cubao traffic, as well as smell the jeep conductor’s pungent armpit as he reaches for people’s fares. I delight in all of these.

The characters also feel  familiar. Dona Conching is the quintessential pencil eyebrowed and sharp tongued matriarch who inspires some love but mostly fear from her family and hired help. Nanay is the long suffering loyal helper who has finally had enough. Amparo is the desgraciada rich daughter who falls from grace. Beverly is the poor girl who sacrifices everything for a chance to have a “better” life in America through a pen pal.  Manong Del is the lonely Filipino manong looking to connect with his kababayan. Uncle Aldo is the spineless son who has allowed his mother to dictate the course of his life. I know these Filipino characters well and I am glad to encounter them on the pages of a novel, weaving their drama for the world to read.

Lastly, the story also feels familiar. When one has been fed a steady diet of soap opera all throughout her life, one can easily figure out the drama behind the drama and predict how the story would end. In this case, I knew right away that somebody was going to end up being related to somebody else, the rich girl would come out fine, the poor girl would not, and there would be an unsatisfactory resolution to a long standing family secret. And I was right.

Honestly, though, I was hoping for an unfamiliar ending. I really was rooting for Beverly to somehow transcend her lot in life. When she didn’t, I cried. But mine was a tired cry, a cry that signaled to me that though I was not yet altogether apathetic to the sad stories involving mail order brides (or other immigrant women who are trapped in their marriages due to immigration issues) I was, at the same time, resigned to accept that for women like Beverly, things have always been, and will remain, shitty. I had heard variations of this same story back when I was a child in the 1980s. It saddens me that the story I’m reading now echoes the similar hopelessness I heard decades ago.

As I reflect on this book, I grapple with these questions: What is the purpose of a book? Is it a book’s responsibility to weave a positive end, albeit an unrealistic one in the current timeframe, for the sake of inspiring hope in the reader? I had hoped that The Mango Bride would give me something new about the plight of the mail order brides, some kind of indication that the tide is turning. But this may not be fair to ask of a book.

In the end, I still feel grateful for The Mango Bride. For telling the story of one mail order bride, even when it is a story that I wish ended differently.

Justine Villanueva is the author of Mama, Mama, Do You Know What I Like? from Sawaga Press.