This Feature presents readers sharing some love about the talent of Filipino authors. We would welcome your participation. This section is for readers. You don't have to write "like a professional," "like a critic," "like an intellectual," "like a well-rounded reader," etc. Just write honestly about how you were moved. Live authors (let alone the dead) don't get to hear enough from reader(s) they may not know even read their works. To know someone read their stories and poems and books is already to receive a gift. Just share from your heart. It will be more than enough. DEADLINE: May 1, 2018 for Issue #6. Duplications of authors and more than one testimonial are fine. 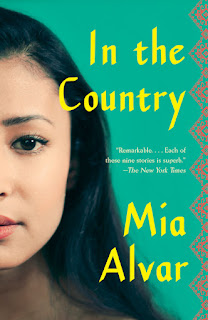 Mia Alvar's  In the Country opened up my eyes to the limits of theorizing about Filipino identities in the diaspora. It made me aware of gatekeeping and academic and literary critics as gatekeepers of what should and shouldn't count, of how we should think and interpret our Filipino lives. In reading these stories, I couldn't tie a neat ribbon around them to say  that these are the stories of the 'servants of globalization' or these are the stories of migration and displacement born out of colonial history. To an extent, yes; but in a larger sense there is something about these stories that couldn't be tamed by theories. There is a wildness about them that refuse all kinds of ribbons. And that was unsettling for me, at first, but then later I came to like the feeling. I came to like the feeling of being uncertain and insecure. Alongside this new feeling was a feeling of an elegant disintegration that is just beginning to hint at other sources of power, other ways of seeing, other ways of being that are so out of the reach of gatekeeping and their coteries. And in this space, a new world is emerging. 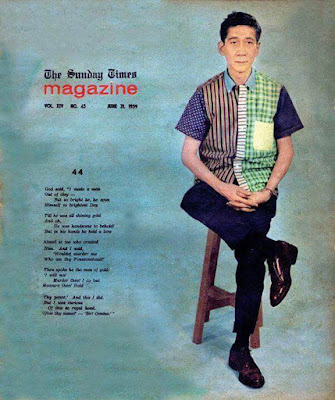 The award-winning filmmakers and documentarians Keith Sicat and Sari Dalena apparently are planning a documentary on José Garcia Villa and Carlos Bulosan. As such, Keith interviewed me about Villa during the 4th FilAm International Book Fest in San Francisco. As a result of that interview—which was the first time in years that I devoted time thinking about Villa—I’m moved to reiterate and emphasize anew my admiration of Villa’s poetry. These are some of the points I noted during my conversation:

I appreciate Jose Garcia Villa for his interest in new poetic forms. Whether or not a reader might appreciate Villa’s explorations—from the comma poems (to both indicate pauses as well as hearken pointillism) to visual poetry, among others—it is significant that Villa did not simply write poems in inherited English but sought to expand poetry’s expanse. And to do so he was irreverent—e.g., not a prude as regards sex or submissive as regards God. Given his context, this is courage.

(As well, I appreciate Villa’s poetic perspectives from a political standpoint, given English’s history as a tool of U.S. colonialism. It’s appropriate for a poet to talk back at language, though I put this point parenthetically as it may reflect more my perspective versus any particular intent by Villa.)

Here is a poem stamped with a voice that can only be Jose Garcia Villa’s. That one can identify such a voice—and here, as in this example below, one sees the difficult-to-pull-off combination of formal experimentation, blasphemous content and lyrical intensity—attests to Jose Garcia Villa’s achievement: 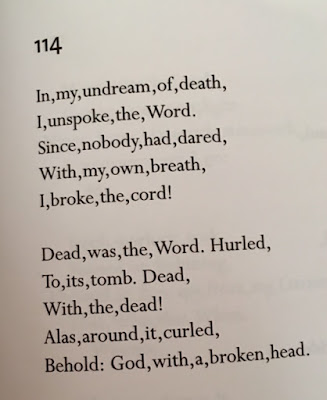 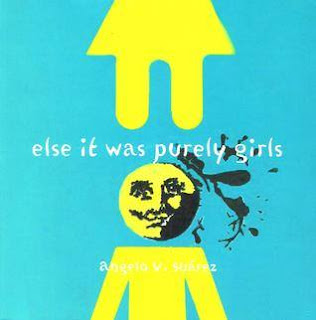 Angelo Suarez was 20 years old when his book else it was purely girls got a nod for publication (this made me recall and imagine what I have accomplished after I turned 20). This handsome, talented, and tenacious (“tenacious” for what he did in representing the grievances of MRT commuters) poet, whose operative poetic theme is desire, lurks under the only living tree in the metropolis and renders the most stupendous of observations. These observations are nothing but keen statements, bordering on the desire to touch even the edge of the skirt of the object of his infatuation, to feel on his cheeks the air exhaled by a stranger he finds of transcendent charm, and to drink on the glass a high-school-days-crush used few minutes before he ordered lemonade. I stutter and I have to stop. My words are not sufficient to articulate my adoration for his verses, where wordplay is served with utmost elegance and amplification is heightened, then pushed down, then given with equilibrium. There’s angst in melody. And there’s melody in the void of music.

I’ve been reading Barbara Jane Reyes’ poems since she was a young poet self-publishing her poetry through the publishing format of Xerox and the publishing house Kinko’s. As of this writing, my favorite poem of hers is “THE DAY,” which is featured in her new book Invocation to Daughters. I understand some folks have called it “angry.” It is angry. But “THE DAY,” a poem about the last day of her beloved father’s life, is set within this collection. So that it actually is reductive to summarize Reyes’ poems as (merely) angry. It would be more accurate to call it “Love”—which would explain why many of the poems are angry enough to strike back. For Love does not tolerate injustice. As Reyes notes in the book’s title poem: “Daughters, our world is beyond unkind”—an educated rather than embittered assessment. This book can both empower daughters but also hopefully educate those surrounding them. [Previously published under “# AllPinayEverything”]