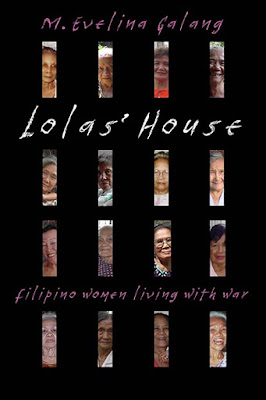 Here are three reviews of Evelina M. Galang’s Lolas’ House: one by Christine Hyung-Oak Lee (The Miami Rail), one Donna Miscolta (Seattle Review of Books), and another by Melissa Sipin (Hyphen). I begin by pointing you to those reviews as good, reasoned responses to the book. It’s also a way for me not to repeat their points and make my review mostly an addition rather than a repetition to what others have said. Thus, what I have to say revolves around two topics: “Blood Resonance” and “Poetry.”

BLOOD RESONANCE
Just before reading and reviewing Lolas' House ("Lola" is a Filipino (honorific) term meaning "grandmother"), I was in Hawai’i to launch a book; I took the opportunity to visit Plantation Village in Oahu. While at this tourist attraction that reproduced how workers lived on the plantations, I came across Hole-Hole Bushi—songs sang by Japanese immigrant workers in the fields. I found a lot of the lyrics moving and immediately thought an anthology of the lyrics would be a great idea. Had these lyrics been sung by Filipino immigrant workers, I would have engaged in research to see if I, as an editor, could play a role in developing such an anthology. But I merely suggested the idea to others in case it would interest others—I felt that such an anthology would be best edited/curated by someone of Japanese descent.

When asked by someone to explain my decision, I thought of “blood resonance”—a phrase that popped up in my mind for describing what I feel is a link between someone and others (others could be people or objects) because of their shared heritage. This is not to say that a Hole-Hole Bushi anthology could not be edited well by someone who wasn’t of Japanese descent. I just felt that such a project would benefit somehow (in that non-scientific way through which art surfaces) because of the shared (literal and also metaphorical) blood. This notion came to arise in my engagement with Lolas’ House.

Conveniently (for explaining “blood resonance”), I happened to read another book on "comfort women" before I read Lolas’ House. This novel was written about an adopted Korean American who visited South Korea and ended up discovering her birth mother was a "comfort woman." The novel is well-researched and perfectly serviceable, but the writing possesses a seam between the author and the characters—perhaps this particular author’s writing just doesn’t sing, but I certainly would not be surprised if it’d be a challenge for a white male author to fully inhabit the character of various Korean women. Yes, I rush to say this comparison with Lolas' House is just a two-book comparison (and one should never discount the power of writerly imagination), but let us still compare the two books … as Lolas’ House’s structure brims with blood resonance. (Interestingly, blood resonance surfaces in Melissa Sipin’s own review where she’s moved to insert a reference to a grandmother who may have been a "comfort woman"; this lack of objective distance is not typical of “reviews.”)

To my surprise actually, Lolas’ House is not just the stories of the Filipino "comfort women" Galang researched during visits to the Philippines. It’s also the 18-year story of how Galang conducted the research, as well as the effects of the research on her. It is not, therefore, a third-party structure where Galang learned about the various lives of the comfort women and reported them. It is one where Galang’s own personal responses are part of Lolas’ House. (I suspect that there is a hidden and important topic here of why it took a Filipina-American to write a book such as this, but I digress....) The structure, Galang explained to me in person, partly was intended to break-up the horrific tales of the 16 interviewed comfort women. Such as this from Lola Atanacia Cortez: 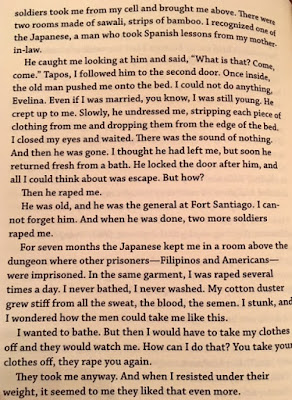 How to read the above and other stories like it one after another? Well, it surely would have been a greater bludgeoning of a reading experience if the tales were just presented one after the other without some break. Especially as the Lolas’ sufferings didn’t end just because war ended and with it the rapes. There’s the aftermath—for example Lola Catalina Lorenzo who, after her ordeal (presented in Salon) was not comforted by family but instead faced this from her husband: “My mister took me home, but he did not forgive me.”

Or, this brutal summation by Galang, a brief essay providing an interruption between one Lola’s story and the next: 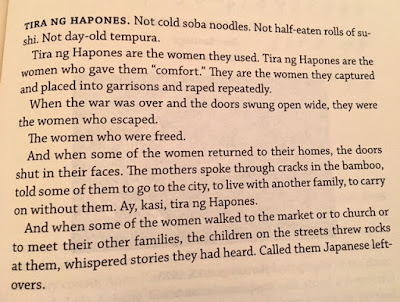 Thus, Galang’s decision not to roll out the Lolas’ stories as a series of rapes is understandable. But Galang’s chosen structure also allowed her freedom to articulate her empathy with the stories well as ultimately to write in a more lyrical and evocative style that does more justice to the Lolas’ humanities than mere reportage. The Lolas are alive in Galang’s books—not mere words on a page, not mere subjects of research and reportage or a scholarly treatise (though Galang, too, is a scholar),… not mere figures from history. The Lolas, in Galang’s words, become like family. Here’s an example: 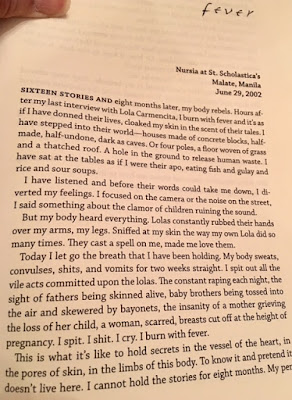 Galang’s structure is extremely difficult to pull off. She can face (and I believe has faced) criticism for inserting herself and her family into others’ stories. Her path can interrupt the flow of the book. The balance is delicate between too much of the author’s presence versus privileging—as it should be privileged—the stories of the 16 former “comfort women” she’d interviewed. In looking back at my first read through the book, there was one moment, perhaps two moments, where I found her presence slightly intrusive. But 1-2 moments (and it’s not like they were so heavy-handed I couldn’t push on with the reading) is pretty good for a literary structure that risked all and, thus, teeters on balance. It teeters, but does not fall—and that bespeaks a humanity that would not have been possible without the author’s personal risk-taking in revealing herself and her strain during this process. It’s an approach that, throughout the book, transcends itself to actually attain poetry: what a magnificent result borne of nothing less than blood. Or, as Galang puts it: 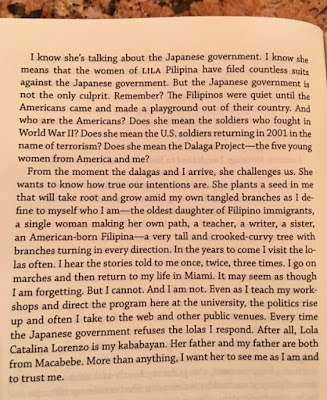 Blood Resonance: when you’re drawn to empathize because the story traveled through blood to become yours and there is no seam between the narrating-you and the story.

POETRY
As she grapples with articulating the stories and moments in Lola’s House, Galang, too, ends up writing poetry. That seems logical: when things are difficult to say—or when things are impossible to say—Poetry can step in.  There’s a reason why Galang went through about 30 translators in transcribing the Lolas’ stories into English. As one of her own nieces begged after receiving the translation task and then reading the Lola’s testimony, “Hindi ko kaya. Hindi na talaga kaya ng body ko, ng utak ko. [I’m not able to translate. My body can’t. My heart can’t.] Please don’t make me do it.”

Galang observes, “Translating these stories, brutal.” So is reading the stories.

So is telling the stories. The Lolas relive the horrors in order to testify. The telling affects the Lolas’ language: 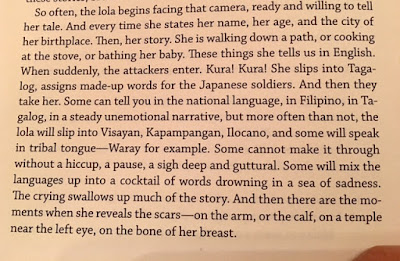 And poetry, too, surfaces. Poetry is multifaceted but I thought of how poetry, too, can be helpful through the elision made possible by minimalism or language’s compression. For example—perhaps an example—Lola Pilar Frias wrote: 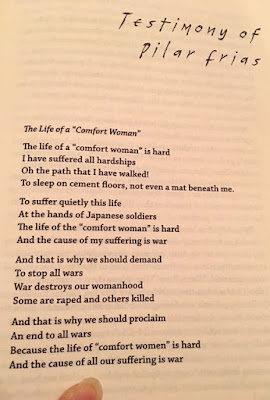 By elision through minimalism, I refer partly to how the lines “To suffer quietly this life / At the hands of Japanese soldiers” surely does not capture Lola Frias’ experience.

Galang’s prose, too, would reveal several instances of the words seeming to run away from what they were chosen to describe. One way for the words to escape would be to nestle into language’s possibilities for beauty. Here’s an excerpt from Galang’s engagement with Lola Frias—within this one paragraph, look at how the words rush to linguistic beauty through its last three sentences: 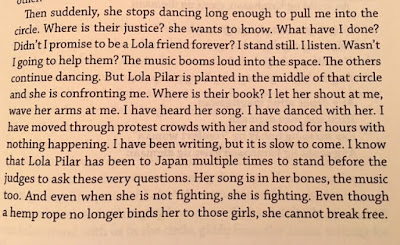 Blood resonance through empathy. Then, Poetry. This could, in fact, be Galang’s ars poetica for this project: 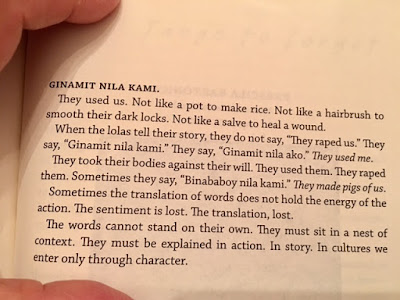 It’s an approach that turns a chapter into a poem; here’s an excerpt from a two-page chapter, "Eight-Limbed Yoga in Manila": 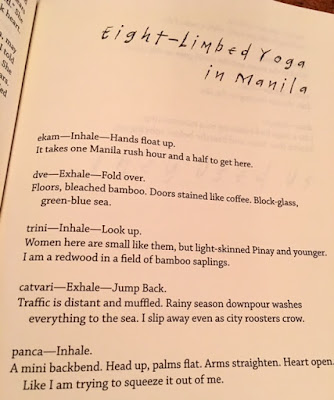 POSTSCRIPT RE. BLOOD RESONANCE
For this “review,” as you see above, I post photos of excerpts instead of typing them out. I do this to avoid typing the excerpted words, to protect my own body from inhaling these stories as much as I can; Galang had felt the Lolas’ words embed themselves into her body (hence, a deliberate self-care involving yoga, family distractions, among others, while researching and writing Lola’s House). My body still knows to shudder from the referenced words, but taking a photo and cutnpasting its jpeg takes less time than retyping the excerpts—I, too, am Filipina.

And yet I notice how, though I tried to avoid photographing fingers and other parts of my hand holding the book open, the slippages are unavoidable. Look at some of the photos—in some, you’ll see a part of my finger or hand, a part of my body.  The image entitled “Ginamit Nila Kami [They used us]”, indeed, shows a curled hand—a gesture of protectiveness? Or a gesture, my unconsciously-made gesture at the time, of embracing the embracing and holding the lolas against the surrounding words: “When the lolas tell their story, they do not say, ‘They raped us.’ They say, ‘Ginamit nila kami.’… They used me.”

NOT A PARENTHETICAL RE. LANGUAGE
I should say there are three, not two, points I wanted this review to raise. The third relates to the point of this review—why I wanted to write about Lolas' House. It’s to spread the word; in Lola Prescila Bartonico’s words: 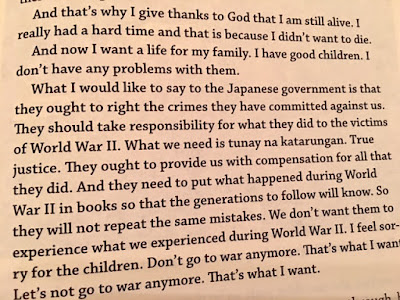 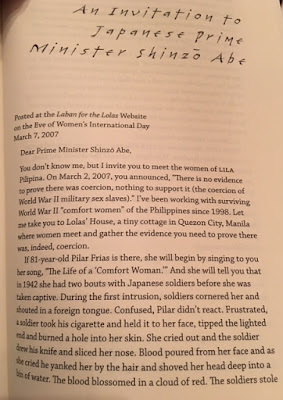 I wrote this review for the The Halo-Halo Review, but I also published it in Galatea Resurrects because the journals' audiences are different. I also publish it here because I want to spread the word as much as I can about the injustice still faced today by the Lolas and other "comfort women." It was only several days ago that the Mayor of Osaka could not tolerate San Francisco's memorial to "comfort women," and so ended their "Sister City" relationship that had been in place since 1957.  Towards the end of the book, Galang notes: 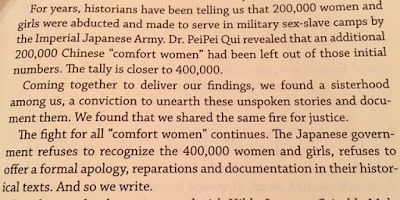