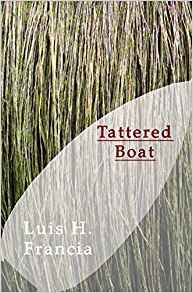 Luis Francia was born in the Philippines and earned his BA from Ateneo de Manila University. He immigrated to the US after College, moving to New York City. Journalist, editor, poet and teacher, his previous collections of poetry include The Arctic Archipelago (1992), Museum of Absences (2004) and The Beauty of Ghosts (2010). In addition to poetry, he has also published numerous works of non fiction including A History of the Philippines: From Indios Bravos to Filipinos (2010) and a play. As well as teaching at New York University and Hunter College CUNY, he also teaches creative writing at the City University of Hong Kong.

Tattered Boat presents the reader with a generous collection of 60 poems divided into four more or less equal sections in terms of length. The sections are untitled but it is clear from reading the poems that each section represents a slight shift in emphasis with respect to content.  Most of the poems fit neatly on to one page but the publishing house  has been thoughtful in accommodating a poem with long lines, Double Vision, on a fold-out page so that each line can run its full length as intended. This attention to detail, together with the cover design by Lyra Garcellano and the internal book design by Lara Gotis, where each section is marked off by a series of lines suggestive of wave water, is in keeping with the fine standard of the finished product.

The title poem, which appears early on, is an image that Francia chooses as a means to express his own feelings now that he is older and wiser than when he was a youth.  It is as if the experience of a lifetime is bottled up inside him. Even the memory of it seems to tire him out – the insistent song of a nearby bird being not so much a thing of beauty as a mere irritation when he finds that he cannot match it:

I sit with my coffee and wish
The bird would fly away, for its
Music is odd, though I am
Older now and odder still, an

Other bent inside himself, the past
In ribbons, morning and myself a

There is melancholy, sadness and a sense of rugged resignation here as, in the words of Patrick A Rosal, when referring to the book as a whole, Francia takes on the ruin of the heart, spiritual wreckage and the failing body.

Francia is nothing if not honest in everything that he writes about. He is not afraid to confront his subjects head on. Issues that concern us all, such as religion, politics, war and terror, all find a place in this collection.

In the startling poem In Miami Christ Confides to a Café Habitué Christ is described as a Jewish retiree:

That wasn’t me on Golgotha.
That was my double.

This is one of several poems on religious themes where Francia fights his own spiritual battles. Like Christ in the temple of the money changers, his anger is expressed in the way he turns the tables and surprises us with the angle that he takes on things. In Dream of the Ascetic he writes:

Have I been holy too long?
Poisoned by saintliness, I need to
detoxify, and bathe in the world
and the waters of its gaudy ways,
I need to reacquaint myself with

the language of the flesh and its oily alphabets.

In From the Diary of a Suicide Bomber Francia documents some final, searching thoughts. The poem is a haunting one. There is even a hint of pathos here, of compassion. The combination of uncertainty and doubt on the one hand and steadfastness of purpose on the other is delicately handled. The poem is rife with contradiction and this is what makes it so powerful. Other equally powerful poems in this collection focus on the Los Angeles riots and the war in Iraq.

On a lighter note, this collection has much to offer in the way of word play and plain good humour. Thoughts over Lunch at Mango Square and its companion piece After-Dinner Notes explore a love of dining and good food. The second one begins unapologetically with these lines:

I like the language of burps
And hiccups,
The belch from the belly, the

Chant after a meal
Beep, beep in the
Bilge, burgeon and

It is, as we say, very physical.

Another poem, Softshoe, is full of playful expressions such as footloose and fancy free; she may be pulling my leg; didn’t she toe the line and do I look like a heel? It is a good example of Francia’s love of word play and it is present in several other poems in this collection. These poems provide a counterbalance to some of the more serious ones and help to take the heat out of all the burning questions posed in the other sections of the book.

Francia makes frequent use of internal rhyme and of grouping words together that have a similar sound but a completely different meaning. Quite a number of poems contain or end with playful inversions. For example, in oblivion he wonders why we rush to oblivion when oblivion rushes to us, and in The Hand he concludes:

Though every fool might have a hand
No hand by itself is a fool.

In The Ivy of Two Lives he states:

All words have meanings,

Not all meanings have words.

Tattered Boat is a finely balanced collection of poems full of insight and humour. A book that raises serious questions from a poet who is brave enough to ask them and honest enough to admit that he does not know all the answers. Highly recommended.

Neil Leadbeater is an author, essayist, poet and critic living in Edinburgh, Scotland. His short stories, articles and poems have been published widely in anthologies and journals both at home and abroad. His books include Librettos for the Black Madonna (White Adder Press, Scotland, 2011); The Worcester Fragments (Original Plus Press, England, 2013); The Loveliest Vein of Our Lives (Poetry Space, England, 2014) and Finding the River Horse (Littoral Press, 2017).