The Halo-Halo Review is pleased to interview authors in the aftermath of a book’s release. This issue’s featured writers include Angela Peñaredondo. 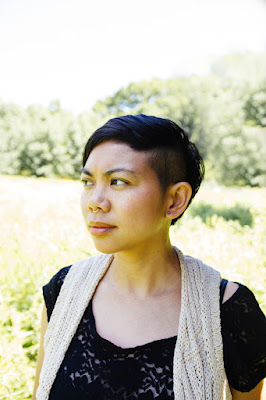 What is your most recent book?
All Things Lose Thousands of Times (Inlandia Institute, 2016) 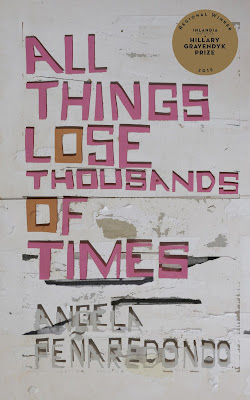 What has been the response?
The book was awarded the Hillary Gravendyk Poetry Book Prize with Kenji Lui (a poet and friend I admire) so that felt good. I didn’t think it would happen but I did hope to publish this manuscript directly after my MFA program so I felt immense gratitude when it was selected by Inlandia and blurbed by mentors, Juan Felipe Herrera, Ronaldo Wilson and Carmen Giménez Smith. Inlandia Institute is a cool, small press that gives special attention to writers from the Inland Empire area of southern California but I still had to do so much promotional work when it was released. It didn’t get any attention from “high brow” literary establishments but I’m west coast/southern Californian-based/queer/pilipinx poet so I practice not harboring any illusions of acceptance from larger literary industries or popular gate-keepers who leave a small and select door slightly ajar for queer poc postcolonial feminist poets and writers BUT I’m very grateful for the readings, discussions, panels, publications, reviews, artists and activist comrades, intellectual and artistic collaborations that came as a result of the book. I learned so much from these forces and continue to be inspired and educated by people that I met and continue to cross paths with because of ATLToT. I don’t take that kind of thing for granted, I can’t imagine ever.

What has surprised you about the response?
Since my teenage years I didn’t feel connected with Filipino/a American communities. This wasn’t because there weren’t any around, I mean I’m from California. At the time, I felt the Fil-Am creative community lacked inclusivity, not visibly supporting the wide spectrum of Filipino/a/x identities. At times, it felt hetero-normative, binary and male-centered so I patched together my own community. However, ATLToT became a talisman, connecting me to like-minded folx, which definitely includes a robust, artistic, radical, intellectual and queer Pilipinx literary community that gave me a deep sense of renewal. It’s a space that I want to keep cultivating, expanding and challenging.

I’m still surprised and feel so much warmth when someone approaches me after a reading, and expresses sincere resonance to ATLToT or that they saw themselves somewhere in my narratives or that our stories intersect through the reading of my work. It especially moves me when someone expresses that my poems have spoken to, identified and/or contextualized feelings of invisibility or alienation. I’m in deep solidarity with these folx because I’ve been there too and still struggle with it.

Tell me something about the book that may not be obvious or known.
I might have told this story to others before…the cover was a collaboration with L.A. based artist, Mike Saijo. Using xacto-knives, we cut each letter by hand from vinyl and glued them onto clear plexiglass. We walked around his neighborhood in Boyle Heights and laid the plexiglass on various surfaces that felt either temporary or eroded by time. I know it sounds esoteric but it made perfect sense for us as artists to create a visual narrative and even a kind of intuitive performance or ritual to personalize the cover. I really appreciate collaborations like this.

What are you working on now?
A couple of poetry and nonfiction hybrid manuscripts that involves the re-imagining and subverting of Filipino/a/x historical narratives of war and cultural erasure through queering poetic narratives, myth-making, and personal magikal conjurings.

Born in Iloilo City, Angela Peñaredondo is a queer Pilipinx poet-artist-educator living and working in Riverside and Los Angeles. Angela is author of the chapbook Maroon (Jamii Publications) and All Things Lose Thousands of Times (Inlandia Institute, winner of the Hillary Gravendyk Poetry Prize). Her work has appeared in Jacket 2, Anomaly (aka Drunken Boat), Weird Sister, Asian American Writers Workshop: The Margins, Four Way Review and elsewhere. Angela is also a Kundiman and VONA/Voices of our Nations Art fellow as well as a recipient of a University of California Institute for Research in the Arts Grant, Gluck Program of the Arts Fellowship, Tin House Scholarship, Squaw Valley Writers Fellowship, Naropa University’s Zora Neal Hurston Award a Dzanc Books International Literary Program Scholarship among others. Find Angela at www.apenaredondo.com