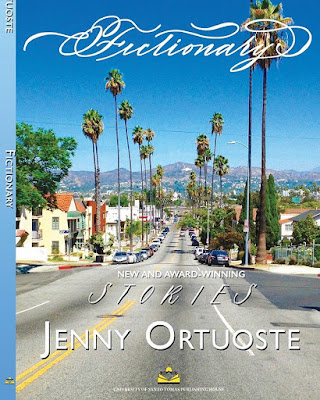 Fictionary by Jenny Ortuoste contains a lively mix of short stories that keep the reader’s attention. Some stories are even page-turners. Some stories are discernibly stronger than others but, as Cristina Pantoja Hidalgo who wrote the Foreword, observes, such is not unusual for first collections. What one can conclude from Fictionary—which may be the best one can say of many first collections—is that talent clearly exists and the writer is to be encouraged to continue writing.

I found one of Fictionary’s strengths to be the surprise endings or twists in some stories—for examples, “Last Race,” “Leaving,” “Stitch,” and “Gleep.”

I also appreciated “Mermaid” which introduced me to the term “floated” as applied in the business world wherein “ones…were set adrift on the corporate sea for their transgressions and omissions.”  The story successfully melds two aspects that are so different from each other that their effective combination is to be applauded; such aspects are that of mermaid and corporate bureaucracy (c’mon: how often have you thought about the two together?).

The collection also contains welcome humor, such as the short short “Freek.”

The writing style, which one critic calls “striking in its simplicity” may reflect Ortuoste’s journalism  experience. But I believe Ortuoste’s writings only will improve from finding enough examples of experimentation (e.g., “Wolves I Have Known”); imagistic language (e.g. from “Barbie’s Basement”:  “She oscillated like a metronome, ignored by the people around her like the way water eddies around a rock in a stream.”); and lyricism (e.g. from “Sire of Sires”: “He gazed at the track. It was aglow in moonlight, each particle of sand luminous. Over this brilliant surface, he saw Conquistador’s legs pumping, galloping for the turn home.”).

It’s no coincidence that the stories who’d won awards are the strongest: “How I Spent My U.S. Vacation,” “Wolves I Have Known,” Marry Me,” and “The Cups.” The first three were recognized in the Nick Joaquin Literary Awards and the fourth placed in a literary contest.

So perhaps I’ll offer a non-humble opinion on which may be the weakest story. I pick “Contribution to a God” which, while an amusing exercise for the author (according to her Introduction) is not sufficiently different from real-life email scams. I think there was a lost opportunity in this story—if she could have ramped up the flakiness or weirdness or magical realism-ness or kookiness, et al, such would have invigorated the tale.

Ultimately, Ortuoste extends her hope to the reader: “Above all else, I hope you enjoy these stories.” By this threshold, the book most definitely succeeds.