The Halo-Halo Review is pleased to interview authors in the aftermath of a book’s release. This issue’s featured writers include Kawika Guillermo. 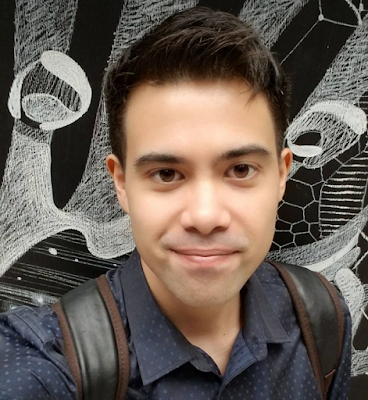 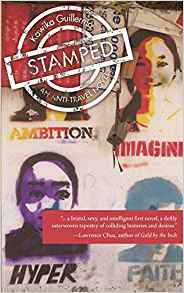 The novel happened to come out only five months after my academic book, which is about literature in English from Southeast Asia and its diasporas. So I think there's pressure on Stamped to be smart or appeal to a highly pedigreed crowd—when really the intention was the opposite. It's silly, lunatic, fringy, and totally mad.

I started writing Stamped before I attended graduate school, in 2007. I was living in South Korea teaching English, coming off of five years trapped in America’s minimum wage service work industry. In Korea I met plenty of people like me, white, black, Asian, gender-queer, who were also locked out of the house of minority success. Worse, we were also locked out of the trains—no one could imagine a Latinx, a Filipino American, a refugee, a Filipina from the Philippines, or even a lesbian, who traveled or worked abroad. Our narratives were so scarce or invisible that even we were surprised we all existed. So I wrote about us, this wayward almost-community of dejected rejects.

Over the next decade I continued adding to the novel on subsequent long trips to India and Taiwan, then returned to it fully when I lived in Nanjing and Hong Kong for nearly five years. Everywhere I went in Asia I found similar transnational groups. In Laos, I spent time with a group of people so mixed up they never bothered with names but only referred to our countries of origin. There was "Philippines," "Thailand,"  "India," and me, a hapa haole/halo halo Chinese/Filipino/White mix, called "the American!" I was mortified, but being "the American" let me see America and my own Asian background in a new way. I never really knew what America was until then.

Please share something not obvious or known about the book.

The novel's sub-title, "an anti-travel novel," actually came from my editor/partner, who likes to joke that I'm "so anti." The novel is kind of anti-everything. It's anti-novel, anti-audience, anti-craft, and even anti-me! I guess that's because I grew up heavily into punk rock, where the worst thing you could be was "mainstream." I have yet to see a sensibility like this in fiction writing that is more than just author-branding (perhaps zines, perhaps flash fiction, perhaps online-only publications). The only "anti" thing I was really conscious of with Stamped was "anti-homeland story," as I’d been inundated in media about Asian Americans "returning to the Homeland" that were almost always covert advertising for tourism and nationalist propaganda (like Crazy Rich Asians). To me there's nothing more banal than the homeland returnee who eats at all the fast-food and street food joints they found on Yelp, Instagrams everything and everyone, and is generally beset with a feeling of home, never wondering why the locals treat them like demigods. Even still, the homeland story is unavoidable because it gives us such intense feels--I love visiting my homelands of Hawaii and The Philippines for these reasons, though it always leaves a bad aftertaste.

The desire to just avoid homeland narratives drove much of Stamped, which is full of Asian Americans who travel to other people's homelands. They are also not your typical respectable minorities—they can be mean, petty, jealous, angry, exploitative, stupid, and high on the trappings of tourism and the American passport. I tried to make them real and complex people and it took a lot of "being anti" to do it.

Another factoid is that Stamped’s cover is from high school Cambodian street artists who painted the streets of the old lake district in Phnom Penh, Boeung Kak, where the novel's two main characters (Skyler and Sophea) meet for the first time. Until 2010, Boeung Kak was a large lake where children offered boat rides to travelers, and small dance halls glittered the rim at night. It was seen as a center of vice, but was also a place for queerness, difference, and refuge in a country of government censors and historical trauma from the American bombings and the Khmer Rouge. In 2010 the Boeung Kak district was basically destroyed by realty companies affiliated with the government, but in its place artists have restored some semblance of its beauty.

A speculative fiction novel that shamelessly toys with everything sacred. There's a suicidal dragon, a salty Djinni, a sadomasochistic Cheng'e, a Buddhist cyborg, and an American soldier in the Philippine-American War who believes God speaks to him through lamp-light.


Kawika Guillermo is the author of Stamped: an anti-travel novel (Westphalia Press, 2018). His stories can be found in The Cimarron Review, Feminist Studies, The Hawai’i Pacific Review, Tayo, Smokelong Quarterly, and many others. He is an Assistant Professor in the Social Justice Institute at the University of British Columbia, and is the author of Transitive Cultures: Anglophone Literature of the Transpacific (Rutgers University Press, 2018). You can read his blogs on travel, politics, and video games at Anomaly Magazine (formerly Drunken Boat) and decomP Magazine, where he serves as the Prose Editor.