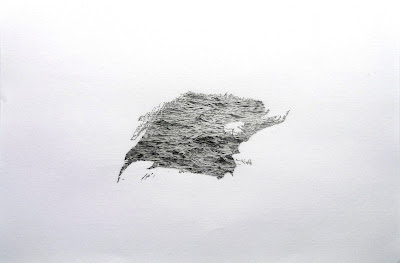 Katrina Bello: Scaling Up by Scaling Down

This past September, I read of conceptual artist Kenneth Goldsmith’s printing out of all of Hillary Clinton's emails and then she showing up at the Venice Biennale to read them. I appreciated this particular work by an artist whose works sometimes don’t work for me. But the work’s effectiveness made me consider as well how money (and lack thereof) affects artwork. It took a lot of resources to print out 62,000 pages of Hillary's email and put them on a faux White House presidential desk. Monetary effect is on my mind as, for the 2nd or 3rd time recently, I was disappointed by a photograph whose image is fabulous online. But when I saw the actual photograph, it was printed (IMO, of course) too small. And I assume that the artist might have had financial constraints on printing bigger but what if the hugeness is an integral part of the work?

When scale as an aesthetic concern becomes dirtied by money (or lack thereof), there’s a loss … including “loss of investment” as put in by the artist in having created the work. Having said that, the scale of bigness rarely plays out on a level field; issues of money, which is to say class and race as well, rear.

Scale is also tricky because, unlike more obviously discernible art materials (paint, canvas, stone…), it can be overlooked as matter—yes, pun on matter of importance. This means, too that small scale warrants its own integrity—not as a result of poverty but as an inherent part of the artwork. When the small-sized artwork (or any size artwork) hews to its ideal scale, the artwork blossoms in its full potential and its viewers benefit. As an example, it’s a joy to point you to Katrina Bello’s “Hawak (Hold)” series of drawings including “Hawak/Hold (Davao Gulf)”. In the artist’s own words:

“Begun in 2018, ‘Hawak (Hold)’ is an ongoing series of small landscape and seascape drawings in the shape and size of the interior of my hands and my children’s hands.”

The first time I saw this work online, I was moved to tears at the intimacy with which this drawn island was on the scale of a human hand. 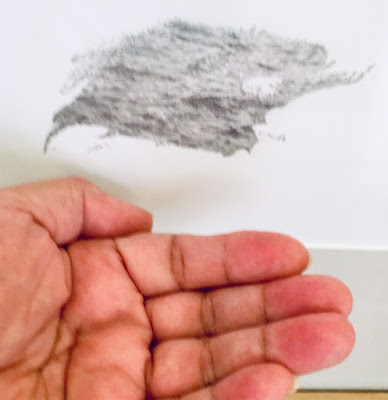 I am moved, unfortunately, for reasons relating to loss instead of—or only—desire. When I consider the idea of a child’s hand mirroring a landscape of sea, I consider how a baby reaches out at the world without yet knowing what that world comprises—not the naivete, but the optimism, of that open gesture not yet checked by reality. Here, I also think of Carmen Giménez Smith’s poem “Boy Crazy” for its lines

I wanted to cup the moon’s curve
in my hand like it belonged to me,
that was how young I was.

Then I’m moved by the idea of a human hand mirroring a geographic scape that physically is much larger than the human, not just in physical dimension but how the natural world is so much bigger than any single creature within it. By a human hand positing itself to equal in scale this environmental reference, is that showing proven human arrogance, or a desire for intimacy with what one will never fully know, or ambition (perhaps foolish) in aiming to be intimate with the unknown? That these questions arose illustrate great art’s ability to move the viewer into even the metaphysical realm.

“My drawing series Hawak/Hold series is partly based on my personal memories and family relationships, and partly based on my fellow Filipino community's feelings and responses to the territorial dispute between the Philippines and China concerning issues in the South China Sea. This particular drawing is based on the waters of Davao Gulf which is part of my hometown in Davao, and the shape and size of the drawing is based on the palm of my older daughter's left hand, as if she was holding the gulf waters in her left hand.”

In reading the above, I'm reminded of how, this year, I became enamored with miniature books (books that don’t exceed 4” x 4” in size). I’ve always loved miniatures (in fact, I have some miniature paintings by Katrina). I believe my love for miniatures is partly because they are physically containable in one’s hands and therefore can be affected by one’s motions—if you hold them up, they will be higher; if you manipulate one of its moveable parts to the extent they exist, then the object will have been changed by you. This “control” and immediate gratification that you can affect something can be a source of relief when the (outside) world seems increasingly mean and psychologically damaging even when one tries not to leave the house. (And, yes, most miniatures are cute.) As such, I empathize with Katrina’s description—as if the cupping of gulf waters in one hand make the territorial dispute something which an individual Davao resident can resolve because it’s contained within one’s hold. This sense also comes up when it came to framing the work.

Katrina had noted, appropriately, that the white space around the palm-size island is part of the work. What this implied to me was that the white part should be HUGE—as infinite as the universe. But it wasn't, which implied initially for me that in framing it, one should have as wide a mat as possible around the work in the same white-ish color of the space. But I anticipated that there’d always be the thin line delineating the work's edge against the mat. Thus, I thought to pick up instead on the color of the graphite—hence, the grayish mat: 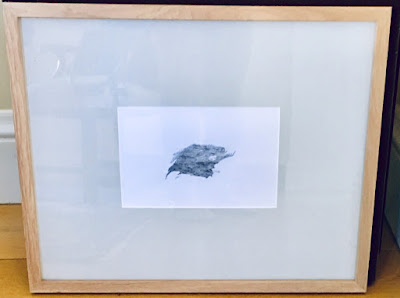 I believe the framing works because, symbolically, the island (grey drawing) relates to universe (white space) relating back to island (grey mat) so that it all becomes a circle of you=>world=>you=>world. Indeed, this circularity reveals itself, too, with how the drawn water within the (gray) land forms its own island—thus, islands contain islands so it’s exactly as another poet John Donne once wrote, “No man is an island.”

I should note that a closer look at Katrina’s drawing is to see an abstraction that transcends the artist’s description of it as “(gulf) waters.” It’s possible to interpret the image as land versus water—are those tips of mountains or hills instead of waves? But to see the artist’s intended “water” as “land” is not necessarily inappropriate (as a metaphor—see above paragraph) because that interpretation is to acknowledge the viewer’s presence and the work—the series—incorporates an invitation to intimacy, for the viewer(s) to inhabit the work.
Finally, as regards the terms of art-making itself, it’s worth noting that Katrina also makes huge drawings—you can see some HERE.  I was conversing recently with another Pilipinz artist Jean Vengua who is planning on going onto a smaller scale in future works. Her reasons (expanded on in this essay) include

* to counter the hubris and tune down the stridency and exoticizing spectacle of 21st century life. Pete Schulte writes: “the quiet and contemplative…are also necessary to create gaps in the incessant flood of stimuli designed to keep us on the wheel”;
* to develop a practice that is more contemplative;
* to work toward a clearer or purer sense of image;
* to use fewer resources and create more “sustainable” art (that’s tricky, though; after researching materials such as graphite [which is mined], acrylics [plastics], and paper or wood [trees] it looks like the best I can do on my modest budget is to use these materials on a smaller scale and recycle when I can).

In response, I opined that when a reproduction of an artwork is available online without information on its size, if the work is great the image is as powerful as any physically large work. So, actually, “smallifying” is another way to determine if an image is actually powerful or effective. By this standard—resulting in, among others, this review—Katrina Bello’s drawings succeed. And I, as one of its viewers, am grateful. 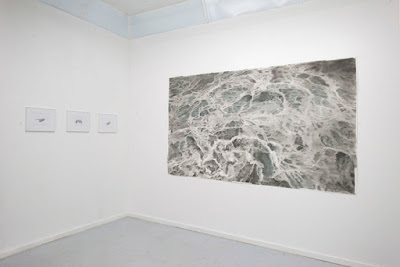 Eileen R. Tabios has released about 60 collections of poetry, fiction, essays, art, and experimental biographies from publishers in ten countries and cyberspace. In 2020 she will release a short story collection, PAGPAG: The Dictator’s Aftermath in the Diaspora. Her award-winning body of work includes invention of the hay(na)ku, a 21st century diasporic poetic form (whose 15-year anniversary in 2018 was celebrated in the U.S. with exhibitions, a new anthology, and readings at the San Francisco  and St. Helena Public Libraries) as well as a first poetry book, Beyond Life Sentences, which received the Philippines’ National Book Award for Poetry. Translated into ten languages, she also has edited, co-edited or conceptualized 15 anthologies of poetry, fiction and essays. Her writing and editing works have received recognition through awards, grants and residencies. More information is available at http://eileenrtabios.com