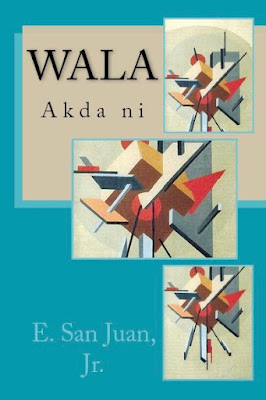 “Selection of what is seen, recording of insignificant facts that gradually transforms the true objects into a sort of background against which another designation of meaning suddenly emerges, …a kind of dissolving view, reminding us of the reflection of Paul of Tarsus, all is calm and yet: this world as we see it is passing away.”[ii]

This passage from Paul Virilio’s The Aesthetics of Disappearance — the epigraph to Wala: Mga Tula ni E. San Juan, Jr. (2018) — illustrates the concept behind San Juan’s latest intervention in conceptual and post-conceptual art and literature. As its title suggests, Wala takes on the various shades of meaning of the Filipino word referring to nothingness, disappearance, absence, loss, lack, or non-existence in Filipino.

Going against the current of dominant art practice characterized by the privileging of craft and the figure of the artist as a consequence of the sheer force of received habits and convention, conceptualism and post-conceptualism has given premium to the concept or idea behind an artistic production — a focus that allows for self-reflexive investigations on what San Juan calls the “spectral” standing of art and its entanglement with the status quo.

Especially in the wake of the 11 September 2001 World Trade Center bombings and the 2008 financial crash, San Juan[iii] locates this post-conceptual turn in the questioning of the triumphalist narrative of capitalism as “the end of history.” He also criticizes it as the only horizon for thinking art that has meant the stranglehold of the author, the work, and the audience as the only purview of approved creative writing and art criticism in the Philippines.

At the surface level, we can read San Juan’s latest experimentations as another addition to his engagement in various fields of creative writing, literary criticism, cultural studies, and political interventions that has been embodied in an extensive corpus amounting to “around 52 monographs, 21 volumes of poetry and fiction in English and Filipino, and 232 academic articles published between 1963 and 2015.”[iv]

But far from simply manifesting the compulsion to keep up with the latest intellectual fashion in the West, a malady common among academic intellectuals, I contend that San Juan’s post-conceptual interventions are in fact a self-reflexive revisiting that looks back to his very own poetic and critical practice.

San Juan has already been drawn to avant-garde poetics early in his life with his experiments in the 1960s in abolishing Tagalog metrics that can be read in the collection Alay sa Paglikha ng Bukang-Liwayway (2002), a fondness further shored up by his close association with poets Amado Hernandez and Alejandro Abadilla during this decade.

But the patently conceptualist trajectory began to take form with his Sapagkat Iniibig Kita at iba pang Bagong Tula (2004), a typographical experiment following the model of Stephane Mallarme’s “A Throw of the Dice will Never Abolish Chance”, and reached a greater level of experimentation with Ambil: Mga Pagsubok, Pahiwatig & Interbensiyon (2015), which had as its underlying principle the definition of the Tagalog word “ambil,” i.e. repetition of expressions and misdirection of intended meanings, to draw attention to social contradictions in which both author and reader are enmeshed.[v]

To illustrate, the chapbook’s banner piece Wala plays on a list of definitions of the word “wala” (an operation that made its first appearance in Ambil), introducing its diverging meanings before ending with an enumeration of words prefixed by “wala” to signify the overlapping and overflowing of signification, an excess which at the same time ironically marks the very loss of meaning.

San Juan elaborates irony further in “Alingawngaw” (“Echo”) which touches on voicelessness as an instance of absence: “Walang tinig” (“No voice”), “Walang bigkas” (“No speech”), “Walang ingay” (“No noise”), “Walang hikbi” (“No lamentation”), “Walang huni” (“No sound”). The last few lines juxtaposes the scene of someone knocking and asking for help but with no one responding, thereby dramatizing the peace of the dead imposed by fascism.

San Juan has been frequently criticized for his alleged difficulty for the lay reader, admittedly an unfair accusation given the specialized academic readership of most of his writings. In a way, San Juan does push his readers of Wala away from passively consuming the text, urging the reader’s playful collaboration.

Taking off from the Virilio epigraph, “Bakas” (“Trace”), “Unang Paalam” (“First Farewell”), “Balikbayang Sinta” (“Beloved Repatriate”), and many other pieces in the chapbook patches together stark details of city life and time spent in the Metro Manila of the 1950-60s, the memories of the Philippines before San Juan’s exile into the United States of which only traces remain.

Iterations of the word “dating” (arrival) are repeated in the piece “Dating”: as adjective, as adverb, as verb in different degrees of progression. This creates a defamiliarizing effect that at the same time makes for an enigmatic note on the tension between the act of waiting for the opportune moment and making that instance arrive. In effect, San Juan’s poetics strives to enact a dialectical mediation of being and nothingness into the process of becoming, a dramatic rendition of the Hegelian concept of Aufhebung (transcendence).

Notions of waiting and desire, which are always relational to that which is missing, forms another dimension of lack that the chapbook’s first three pieces — “Tipanan sa Pinto ng Hardin” (“Rendezvous at the Garden Gate”), “Bitin” (“Wanting”), and “Pasumalang Tadhana” (“Random Fate”) ruminates on.

“Niyari” (“Produced”) relays the construction of the contours of a concept as always going beyond the limits of this production: “umalpas / umigpaw / umapaw” (“transcends / leaps over an obstacle / overflows”). Ultimately, readers are enjoined to partake in the revisiting of these spectral presences and traces from San Juan’s own past as well as from the unresolved contradictions of contemporary Philippine society that are textualized in these pieces.

However, as San Juan[vi] also warns, treating appropriation, self-referentiality and other defamiliarizing textual techniques associated with avant-garde artistic movements sans any concern for content or context ends up in formalist games that does not at all partake in the subversion of dominant literary institutions and politico-economic structures.

San Juan has come a long way since he came of age as a poet and scholar in the 1950s and 1960s. As a third year college student at the University of the Philippines Diliman, his poem “Man is a Political Animal” was censored in the 1957 issue of the Philippine Collegian for allegedly using “blasphemous” language. This resulted in his being banned from being published in the student paper as an undergraduate.[vii]

The young poet had by then begun to abandon the hegemonic formalist tradition in favour of politically-engaged literary practice amidst the radicalization engendered from the shadow of the Huk rebellion, intellectual debates between religious sectarianism and liberalism, the birth of the national democratic movement, and the anti-dictatorship struggle in the Philippines and the rising civil rights, anti-war, and new left movements in the West.

This shift is exemplified by his writing of the Radical Tradition in Philippine Literature (1971) and Carlos Bulosan and the Imagination of the Class Struggle (1972), landmark attempts at recuperating the revolutionary impulses in Philippine literary production.[viii] It is also articulated in the combative poems and essays penned in the wake of his involvement in the mass movement against the US-Marcos dictatorship as a Filipino scholar in exile in America that have been collected in Kung Ikaw ay Inaapi, Bakit Hindi Ka Magbalikwas? at iba pang Tula (1984), Only by Struggle (Kalikasan Press, 1988), and Himagsik: Pakikibaka Tungo sa Mapagpalayang Kultura (De la Salle University Press, 2004).

Unlike the intellectual trajectory of many scholars and academics from his era who have since turned their backs on their militant involvements, San Juan’s writings continue to engage with what he calls the radical tradition in Philippine culture and literature as rooted in the various social movements in the country’s history that emerged against colonial and imperialist oppression. San Juan had been active in the anti-Marcos dictatorship movement in the US from 1969 to the 1980s and continues to be involved in the Fil-Am advocacy group Kamalayan and the International Coalition for Human Rights in the Philippines (ICHRP).

The post-conceptual trend provides San Juan another platform to look back into the place and interconnections of both his endeavours to produce anti-imperialist scholarship that sought to counter the dominant colonial and neo-colonial writing on Philippine history and culture and poetic productions that are crafted as additional arsenals in the national liberation struggle.

This is a step away from the sometimes fashionable use of activist vocabulary that does not critique the social position of one’s own literary practice or the equally uncritical penchant for seeking “utopian” impulses in every consumer product churned out by the culture industry just because they are patronized by the masses. Today hegemonic conception of the literary and the artistic has become so entrenched that it is very well easier to imagine the end of the world than to picture the dismantling of dominant literary institutions.[ix]

The ultimate realization of post-conceptual practice moves away from such naturalized ideological impressions by moving, as Angelo Suarez propositions, from textual games towards collective acts that inscribe themselves on the body of the social — that is, in taking to the streets and seizing the means of production rather than the mere scribbling of “metaphors for mass protest” and “weaponized literature.”[x] While falling short from reaching this full emancipatory potentials of post-conceptualism, it is nonetheless in works like Wala that we begin to conceive something new.