A LOLONG TIME AGO: a Prehistory of the Philippines by Michelline Suarez, Joonee Garcia, Divine Reyes and Benjor Catindig (Tahanan Books for Young Readers, 2018)

A GENTLE SUBVERSION: Essays on Philippine Fiction in English by Cristina Pantoja Hidalgo (UP Press, 1998)

A Literary Journey with Gilda Cordero-Fernando by  Sylvia Mendez Ventura (UP Press, 2005)

A LOLONG TIME AGO: a Prehistory of the Philippines by Michelline Suarez, Joonee Garcia, Divine Reyes and Benjor Catindig (Tahanan Books for Young Readers, 2018) 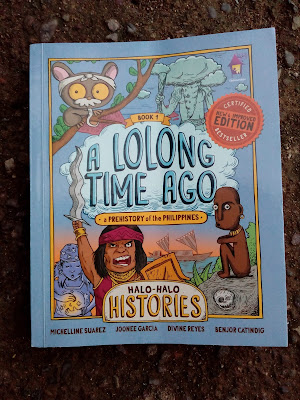 Flash Book Review No. 75: Filled with "tsitsirya" trivias, puny comments on how we un/love our ancestral identity, and trendy illustrations on how complex and civilized our lolos and lolas were, this book is fun to read! A Lolong Time Ago: a Prehistory of the Philippines (Tahanan Books for Young Readers, 2018) detailed to both young and young-at-heart readers the rich culture of our precolonial past, started this impetus with the rival theories on the country's archipelagic existence and furthered on the fashion, aesthetics and survival skills of commoners. I admired the authors', the illustrators' and the designers' wit and dedication to put up the first of the series of entertaining and exuberant books on the history of the Filipino people. I saw and felt the pride running in the veins of "young" folks behind this task of educating English-speaking readers of what it takes to be a native Filipino, and to be one who embraces his mythic self, connects with his deities and with nature, and contributes in establishing villages and communities, so this country will live up to its moniker, the "melting pot" of Southeast Asia. Color inserts of artifacts and fossils, as evidenced by rigorous archaeological and anthropological work, were provided in gloss sheets, so we could appreciate the intricacy and diversity of Filipino life in the distant past, when invaders hadn't yet touched on our shores. With this, love for culture is getting more and more fervent on me! 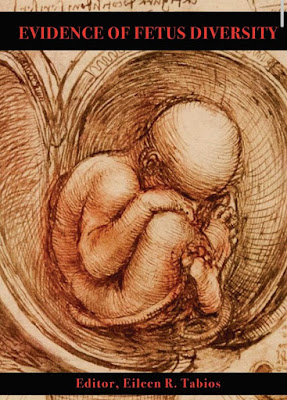 Flash Book Review No. 89: "In our diversity lies our power". This line from Beth Baugh's "[my inner fetus]" encapsulates what this collection desires to reverberate: yes to diversity and to the empiricism of human and social realities. The diversity of forms and poetic techniques, exemplifying the nuances and idiosyncracies of poets who find consolation and self-transcendence in the art of versification, demonstrates how powerful literary engagements could be. They are capable of stirring not just the reader's imagination, but also his political self. Rummaging for recent poetry anthologies and self-published chaps in secondhand bookstores and cyberspace is tantamount to saying that poetry is one of effective and sensible vehicles for diplomacy, if not rage against the lights-that-be. The repetition, or the mere mention, of words as explained in the Editor's Note (e.g., vulnerable, entitlement, science-based, transgender...) could be taken by one as redundant or nauseating. However, what should be noted in this collection, edited by the much-celebrated and very generous poet Eileen Tabios, is that the breadth and complexity of selections must be derived from a metaphorical significance: the limitlessness of imagination reinforced, vivified and concretized by circumstances and trends. Distortions, restraints and jugglings of words and lines are never meant for alienation. Form is such a social element. We digress through the infinity of language.

A GENTLE SUBVERSION: Essays on Philippine Fiction in English by Cristina Pantoja Hidalgo (UP Press, 1998) 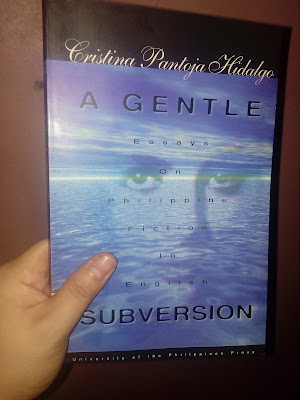 Flash Book Review No. 74: "Behind their docility is rebellion, and behind rebellion is surrender." Distinguished fictionist and literary scholar Cristina Pantoja Hidalgo provided some Filipino women writers in English, emerging and pioneering alike, a space, a certain kind of clearing out of the immensity of literary works by male writers discussed in the classroom. Published by UP Press in 1998, the book explored how women writers portrayed the female protagonist in the novel and in the short story, through the gaze, and in the shadow, of male characters, let alone her relationships, as established by the author, with other female characters (mothers, housemaids or childhood friends). What was hidden and implicit, in the context of womanhood and femininity, was succinctly extracted from each of the works discussed. Demonstrated with clarity and coherence as expected in effective academic writing, and, unsurprisingly, with the cadences of fiction which Hidalgo is also a master of, these five essays (originated as papers and professorial lectures) reminded me of critical essays equally beautifully done by literary giants such as Milan Kundera and JM Coetzee, as well as those by Bienvenido Lumbera. Like what Soledad Reyes said about Hidalgo's paper on two of Edith Tiempo's early novels, these brilliantly crafted essays are "a step in the right direction". May impactful insights like these resonate beyond universities and literary circles, so what women writers have succeeded to create out of their wit and passion would not end up as only "nocturnal moths with carved fragile wings". (Out of the many works cited and discussed in the book, I have read, in full length, only Dalisay's novel Killing Time in a Warm Place, Fernando's story "The Dust Monster" and Rivera-Ford's "The Chieftest Mourner".)


A Literary Journey with Gilda Cordero-Fernando by  Sylvia Mendez Ventura (UP Press, 2005) 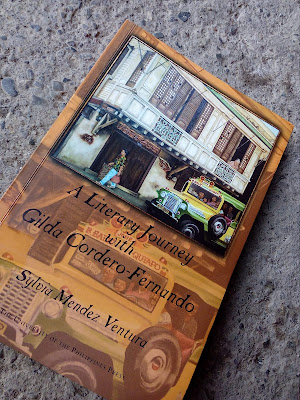 Flash Book Review No. 76: The epitome of Filipina transcendence, Gilda Cordero-Fernando have stupefied me and made me read her numerous works all over again since I got a copy of Sampler, published by Anvil. And now, the equally eloquent Sylvia Ventura, whose essays were also included in critically acclaimed CNF anthologies, brought to life with profundity and vehemence some of GCF's oeuvres (both recollecting the exciting heritage of our Filipino-ness and looking deeply into trends heavily influenced by the West but reengineered for the benefit of Pinoy creativity). The rigor and complexity of Ventura's research made this book, published by UP Press in 2005, a masterful collage, conveying how good, great and gracious GCF must be, even in the throes of her kaleidoscopic marriage, as age embraced her with chains and trucculence. And the much-awarded fictionist-essayist, as evidenced by Ventura's informative and relatable exposition, has transcended from all these frustrations and pains. Every metaphor and parallel text in each story is rendered with realities experienced and recorded by GCF herself in her widely patronized essays and memoirs. Putting to good use approaches in psychoanalysis, deconstructionism, feminism and formalism, Ventura had succeeded in her task, having made me, as I read the last paragraph of her concluding word, root for more Filipiniana par excellence. 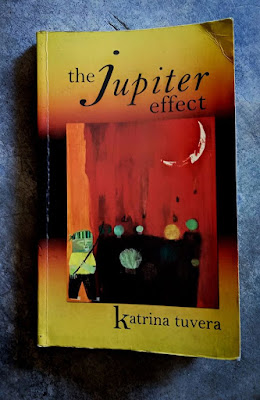 Flash Book Review No. 83: What began as an enumeration of scenes of comfortable life lived by the Contrerases turned out to be a series of awakenings, of spoiled brats gradually developing social conscience, slowly veering away from the veneer of impunity and conspiracy. The Jupiter Effect (Anvil, 2006), with all its vivid elucidations of what transpired in the martial law years, proved to be a gem in Philippine letters, not only for Tuvera's aptitude in rendering every sentence lyrical and capturing of terror, confusion and insensitivity, but also for how the story unfolded, how it made me excited every time I turn from a page to another. Seamless and candid, coherent and empowering. When the book was sold for 99 pesos a few months back, I got a copy, surmising that this would be another historical/political novel pushing for an age-old propaganda and aspiring for acclaim from critics and literary circles. I was mistaken. As a voracious reader of sorts, I have fully appreciated this narrative, savored every conversation between characters, especially ones between Raul and Julian, and pondered on how totally brutal and heartless the martial law years had been. May this story be adapted for television or film, so that the viewers and learners of today would remind themselves that their acts and notions towards the present political landscape should always be for the benefit of all and all suffering and unheard, so they could tell themselves, while striking their breasts, Never Again.

Since 2016, Aloysiusi Polintan has worked as a Senior High School Principal in Divina Pastora College. He started scribbling poems and essays when he was 17 years old. These poems are still kept in a notebook and wait to be revised for future publication. This notebook will be revived and will give birth to language already "lived." That is why his blog is named "Renaissance of a Notebook," a blog of poems, personal and academic essays, and flash movie reviews. His book reviews, which are published and featured in The Halo-Halo Review and Galatea Resurrects, are also to be found on the blog, under the series title "Mesmerized." He believes that the ability to judge or critique a literary piece starts with the reader's being moved and mesmerized by the artful arrangement of words articulating some longing for freedom and individuality. He's now working on a manuscript of 50 poems, with a working title of Brittle Sounds. He's 24 years old, living in Nueva Ecija.