WITNESS IN THE CONVEX MIRROR by EILEEN R. TABIOS 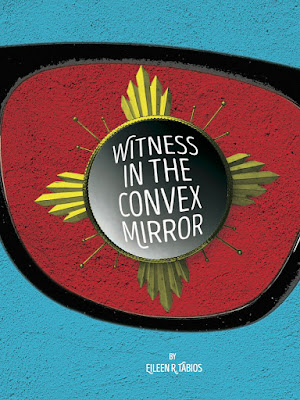 All the poems in this collection take as their starting-point lines from John Ashbery’s celebrated poem, “Self-Portrait in a Convex Mirror.” It is a very generous collection comprising 119 poems divided into five distinct sections with helpful notes for the reader at the end. It also includes almost all of the 22 earlier poems in the series, originally published under the title Love in a Time of Belligerence (Éditions du Cygne, Paris, 2017), so that readers now have virtually the complete series in one volume.

The spectacles on the cover underscore the shift from self-portrait to witness. A self-portrait is something that depicts or says something about the person who produced it but a witness is not that same person but A. N. Other, a person who observes something first and then speaks up about it, if necessary, in a court of law. Tabios uses this substitution as a vehicle to speak out about many of the world’s pressing issues as well as other themes that are universal in their scope. Less noticed perhaps is the shift from the indefinite to the definite article in relation to the convex mirror. A witness can only observe things through his or her own lenses, not anybody’s lenses. We should also note, in “Beautiful Lovers,” how Tabios makes a distinction between the use of the indefinite and definite article citing how words shift from the general “a” as regards pleasure to the specific “the” for the pain. This is a collection that is full of pain (and sorrow) for our world.

Tabios refers to her sequence as being a series of “riff-offs”—a neat contraction of two ideas revolving around the concept of a rip-off (a slang term meaning to exploit or to steal from something) and a riff (a term frequently employed by jazz musicians to imply a phrase that is played repeatedly or a theme that is subject to improvisation). Both meanings are particularly relevant here where lines have been borrowed from another writer in order to free-up the imagination.

In these poems, Tabios achieves a “leaping effect” —that is, she leaps from one topic / image to another in much the same way that the mind leaps from one thing to another in quick succession. It is rare for an image to last the length of a poem. It is more usual for several diverse images to be contained within one poem.

Convex mirrors reflect light outwards, therefore they are not used to focus light. Such mirrors always form a virtual image, since the focal point and the centre of curvature are both imaginary points "inside" the mirror that cannot be reached. As a result, images formed by these mirrors cannot be projected on to a screen, since the image is inside the mirror. The image is smaller than the object, but gets larger as the object approaches the mirror. Objects in the mirror are closer than they appear, they provide a wider field of view as they are curved outwards.

When Tabios looks into the mirror, she does not just see herself.  There is nothing narcissistic or egotistical about this volume. Instead, she sees certain aspects of human nature and our fallen world, areas that we would rather not see. Her poems speak out against sexual violence, cruelty, injustice and slavery. They speak of disengagement, deception, drug abuse, pollution and promiscuity.

Tabios takes two expressions from the art world to act as titles for sections I and III in the book: they are Abstract Expressionism and Cubism Color. In simple terms, the former may be defined as subjective emotional expression with particular emphasis on the spontaneous creative act. The poems in this section certainly read as if they have been fired off at white heat. The latter may be described as a perspective with a single viewpoint abandoned and use made of collage. Tabios certainly weaves together a collage of facts culled from newspaper articles, internet sources, TED Talks, quotations and popular song.

Expressions of concern for the future of our planet frequently surface in poems such as “History” (“We break / proven ancestral wisdom by taking more from / the land than what we give back to it. Then we /  scar the planet again with laboratory-made / pollutants impossible to compost”); “Living in the Micro, not Macro” (“We’re no different from the Ross Ice Shelf (and / the rest of Antarctica) as the planet warms / around it”) and “Ravished in the Raw” with its commentary on the plight of bees (“how chemicals and other human-made / pollution are destroying their habitat, / causing them, in turn, to destroy more habitat”). In “Anthropocene” she writes “Watering lawns / is no longer an innocent exercise…Turning on / the air conditioner means bleaching  / the corals of the Great Barrier Reef. / Your lover’s thoughtful gift of sea salt / for your culinary affectations? A bounty / of microplastics”.
Tabios moves seamlessly from serious philosophising to light-hearted humour. The consequences of baring a nipple in public is ingeniously conveyed through the image of an Arthurium in  “Mundane Ass-Ette.”  Other examples of her humour can be found in “Poetic Legacy” and “Betrayal with Brand Names.”
The season is quite often winter and with it there is the association of ageing and mortality. At least three poems have the word mortality in their titles while other titles such as “The Temporal,” “Raging Against the Dying Light” and “R.I.P. John Ashbery” hint at it. In “Living in the Micro, not Macro” she writes “ We’re past / the age of boozing, drinking and drugging as if /we always will be slim, fresh-faced and smiling” and in “Queen Anne’s Lace” she remarks “To be young is to be beautiful/ and so we were”. She writes starkly about the deterioration of the body as much as she does about the deterioration of the planet.
Sometimes, whether by accident or design, a correspondence can be found between one poem and the next one in the sequence. For example, roses inhabit both “Synesthesia” and “Aura” and buds inhabit both “Mundane Ass-Ette” and “Ravished in the Raw.”
The recurring preoccupation with a varied vocabulary of roses, perfume, financial terminology, human physiology (especially the face and the hands) in Section I gives enormous satisfaction, making these poems stand together rather than apart. There is less cohesion in Section III although the financial terminology remains.
In Part II, which acts as a kind of interlude, Tabios hands us some light relief (if you will excuse the pun) on the subject of male masturbation (quelle surprise!). With characteristic humour, she lists all the synonyms she can find for this act and, in so doing, gives us another example of one of her “list” poems. For readers who struggle to see how this fits into the framework of the whole book, however, there may be a serious point here. Our abuse of the planet also includes, as viewed by some people, our abuse of our own bodies. Taken to excess, it may be viewed as one more example of selfish gratification.
Part III addresses issues to do with gender, race and politics. It is a searing account of the world in which we live. Topics covered include the politics of negotiation, war, climate change (extreme weather events: melting icebergs, super typhoons) and facts about why we should love trees. One of the most powerful poems in this section is “Euclidean Geometry” in which Tabios addresses the following conundrum head-on:
…we are insects within a universe whose
eye turns at random to our hairy tibia wriggling
for attention, only to react with indifference. After
all, our major powers bomb others then return
with aid. Or, we aid others before bombing them.
We are not reliable.
Then we build museums
complete with notecards beside each image of naked
girls running down stony paths, their wings burning
and mouths screaming loud enough to tear down
centuries. We read the nearby notes and feel
what are unwritten. We return our eyes to fire
in backgrounds, as if distance from our eyes
can cancel their existence. Our eyes return to
foregrounds and we cringe from smelling burning
flesh. How to return to the origin of our race
before we became impure from living? Or are
we fooling ourselves by believing, in the beginning,
we were charged with good behavior?
So that each fire that’s since flared can be
attributed to misbehaviour—an approach that
offers the relief of explanation?

Part IV addresses another range of current issues: everything from sex dolls to robots, and the cleaning up of the Fukushima disaster. In “Lord, Please Forgive Them For They Know Not What They Do,” Tabios ends with these two lines:
how parents must grieve other what they birthed.
How God must truly anguish over us!

Part V rounds off the collection with four “Excavated Tankas”, that is tankas that have been formed from specific phrases taken out of longer poems where the remainder of the text has been struck out.
In this collection, closely paraphrasing lines from "The Ascetic’s Secret," much is captured in the convex gaze, including things we ignored during our yesterdays but now will be part of our conscience. Not only is Tabios a poet of words and actions, she is also very much a poet of our time. Recommended.