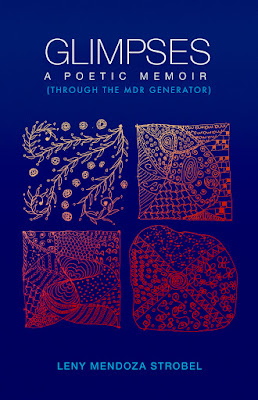 As a university professor and cultural non-profit founder, Leny Mendoza Strobel has made decolonization her life’s work. Within the modernist and post-modernist tropes of academia and within her own Filipino-American community she has made a life of questioning dominant cultural assumptions, investigating the origins of social oppression, and building networks of people who seek to create a world lived from a more indigenous and inter-related perspective.

In Glimpses: A Poetic Memoir (Through the MDR Generator) Strobel takes an arguably more personal approach to this work than in her previous writing. However, as the reader soon learns, the distinctions between the personal and the political, between poetics and polemics, and between the individual and the social world in which individuals operate are all just more cultural assumptions worth challenging. For example, her memories of young love and high school experiences are not disconnected from the forces of globalization nor oppressive experiences of hierarchy. For Strobel, and she would argue for everyone, it is all connected. Her poetry is a reflection of a thought process always questioning the foundations on which it was formed. The result is an unflinching look at how personal memories, personal dreams, and personal passion can affect and are affected by culture, spirit, and society. After all, she says, “I do not have an I without You”.

In Glimpses Strobel uses what she calls “the tyranny of the English language” against itself.

“If I could undo all of these internalized narratives of the West, I would. I must” Strobel states emphatically. This is what makes Glimpses a gift. Strobel’s poetry is not didactic or moralistic but none-the-less, implores us to think differently. It is not an essay or treatise on racism, colonization or even decolonization for that matter. It is the wisdom garnered from these struggles, distilled into a poetry unadulterated by jargon. This is a book written by someone who knows that with big solutions can come big problems and for all her life has been a devotee of inquiry, privileging the questions over the answers.

Even the writing style itself is a challenge to one of our most dearly-held values, that of illimitable personal freedom, or as Strobel writes, “the cult of individualism”. While the poetry itself is indeed that of Leny Mendoza Strobel, it is also clear that each poem could not have existed without the inspiration of another because each poem itself is a response to one line of Filipino-American Poet’s Eileen R. Tabios’ book Murder, Death, Resurrection.Tabios also writes the forward of Glimpses.This call and response style of writing is complicating and subversive. The meanings of Tabios’ work are at the respectful mercy of Mendoza’s poetry and the net result is not competitive but collaborative. The two women are not competing for their version of reality to be validated but are rather co-creating meaning in an exercise of deep sharing and inevitable entanglement.

In tracing Strobel’s own journey of decolonization, Glimpses can in some way be read as a guide for decolonization and a critique of academia itself.  Strobel’s voice is no longer in service of institutions or even philosophy, but rather in service of her heart’s own longing. She writes of her years in academia, “I buried my head in books, learned about postcolonial criticism, decolonization, empire and colonialism. Words fed my hunger for explanations. But it was also words that starved my heart and spirit.” And true to her words, we see over the pages of Glimpses, that one of the questions we should ask ourselves is not what we know, but how we know what we know. For Strobel, it seems it was less about the attention she paid to books and lectures and more about the attention she paid to the interactive experience between her and the rest of the world.

Glimpses is also the poetry of Strobel’s complicated life as a woman who finds herself born of two nations and belonging to neither, a woman enraptured with theory, but hungry for experience. Strobel shares the uncomfortable corners of contradiction without shame, but instead with deep curiosity and wisdom. For example, in talking about her career as an academic she highlights a kind of contradictory parallel process that was happening inside her as she drove to her university everyday for 30 years inspired by the wildlife she would see on the drive and bereft by seeing that wildlife disappear by the end of her career. This anecdote is in some way the predicament we are all in, watching what is small, meek but beloved and important disappear in our yearning for big ideas, for big solutions, for big plans.

Though she is an academic by trade, in sharing her own memories of colonization, racism, young love and old love, desire, place and in sharing her own misunderstandings of herself and the world, Strobel creates a truer, more intimate anthropology than academia could ever dream. This is also in part because her anthropology is not so consumed with how people once lived but instead how they do live and how they could live. This is perhaps where she is most subversive:
“Join a growing community of folks who are doing the same- finding a new story to tell away from Dow Jones index, economic indicators, etc. Must redefine happiness and joy. Redefine work, Redefine currency away from money”.  But unlike many social critiques, Strobel offers and alternative: Dwelling.

To dwell in a place has been the subject of Strobel’s previous work but in Glimpses, she deepens that idea. For Strobel dwelling is connected to an intimacy with a land and a history of that land. Be it the redwood or apple tree in her yard, or Native American history to which her yard is connected (or perhaps entangled). And dwelling isn’t just another weekend workshop for Strobel. It is something rooted deep in memory and the preciousness of family:
“For me, it’s my Apu’s vine, my connection to my roots, to magical women who made garlands of jasmine picked in the early morning before the buds open.”
For her dwelling is also honoring the seemingly small things as something worth more than just passing curiosities or diversions. The inner world of her young nephew becomes a cornerstone of a meditation on spirit, a simple suburban home becomes a “sanctuary for community”, the hiding of a teen-age relationship becomes a shame that is both “historical and civilizational”, and an incident of a kid farting in class becomes a the poetry of memory, secrecy, and love. In Glimpses,we find a veneration of the intimate, in its many beautiful and contorted forms.

While Glimpses is filled with grief, it is the expression of that grief that proves itself to be an empowering strength:
“Honoring grief and letting myself cry without feeling afraid… I acknowledge this presence of stories” she writes. And in another poem:
“The perpetrators have done things to your body
but they took nothing from you.
They didn’t take the stardust in you.
Remember your strength and your Source.
Cry. Let the tears flow.
That is how we become human.
But you are warriors.
You will rise up.
You will end this scourge in your life.
We will heal our communities. “

Strobel’s poetry is that of a woman in constant discovery of her own torturous spiritual path. But with a humility characteristic of her writing, Strobel takes credit for not even this:
“The universe writes the song, not I. I am being sung. We are being sung.” And it is evident throughout that this line of reasoning is not a spiritual bypass. She means it because she has lived it.

As deeply political and as deeply personal as Glimpses is we find a woman watching her world, but not entirely of it, an outsider looking in but then finding herself inside the box at which she had previously been gazing. And her poetic critique is so sharp that at some point the reader must wonder if they are the one glimpsing or the one being glimpsed.

This is a fully embodied work of art that decisively chips away at the lines and borders that have formed the corrosive structures of categorization in the west. “Poetics as a way of being is what I claim”, writes Strobel. In poetry, it seems Strobel has found a tender home in which to dwell.

Christopher Bowers a father, musician and writer currently living in the occupied lands of northern California (in Coastal Miwok and Ohlone territories). His ancestors are from western, northern, and Eastern Europe as well as North America. He is a co-founder of Racial Justice Allies of Sonoma County and has been involved in various works of community building and social justice. He is currently re-evaluating what all that means and what new visions might be possible in all of these endeavors. He lives with his deep-hearted wife Jen, their light-bringing son Rylan, and their empathic, cuddle-loving dog, Freyja.
Posted by EILEEN at 11:58 AM