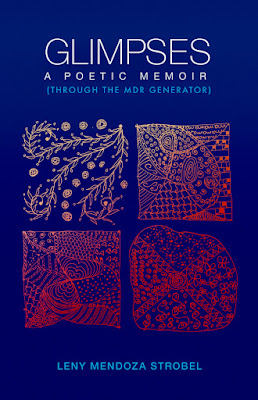 Poetry asks: Must words be trapped by definitions?

That is one of the questions raised by my “MURDER DEATH RESURRECTION” (MDR) project.* Through MDR, I created a collection of 1,167 poetic lines by reading (at the time) 27 prior poetry collections. The concepts of “murder,” “death,” and “resurrection: were intended to symbolize how I was replacing (murdering and putting to death) the older poems with new (resurrected) poems. The resulting lines, as anticipated, veered off from the older poems’ original contexts—the new lines had to reflect my changed identity years after writing the older poems, the new contexts imposed by changed times as well as memory lapses, and new considerations of the language.

One of MDR’s intents, therefore, must be to show the fluidity of words—how they can mean, evoke, and call out different things from different readers and writers who use them.  I’m honored that Leny M. Strobel was moved to use the MDR’s poetry lines as impetus for new writing. When I published the MDR’s lines, it was with the intent of having their readers create new poems and art as a result of reading them—just as I had created new poems from reading older poems.

First, Leny created new poems by randomly combining my poetry lines. Next, and as shown in this book, she created a memoir by writing each section as a “free-write” from a randomly-chosen line. Many of these surprise—their unexpected results are a gift to the writer. Don’t we writers want to face new dimensions to our works as a result of readers? A Gift. Read how one of my entries, the line

becomes one of Leny’s brief memoirs ending with a sentence one could never anticipate from mine:

I could continue with so many examples. Instead, I invite you, Dear Reader to simply read Leny’s own words—you need not read these dated free-writes chronologically; feel free to open the book at random—and marvel, as I did and do, over a life so richly-lived and such a contributor to the diversity of the human race at our best.

You might also be moved to write in response to Leny’s writings, for great writing often inspires readers to write as well. Such is the fluidity of words: they are not meant to be trapped in stasis. They can move beyond dictionary definitions and contexts defined by other authors to become directly applicable to your life. Such is Poetry’s suggestion, and, to my and our gratitude, Leny’s book is proof.


Eileen R. Tabios has released about 60 collections of poetry, fiction, essays, and experimental biographies from publishers in ten countries and cyberspace. Most recently, she released a short story collection,PAGPAG: The Dictator’s Aftermath in the Diaspora and a poetry collection, The In(ter)vention of the Hay(na)ku: Selected Tercets 1996-2019. Her award-winning body of work includes invention of the hay(na)ku, a 21st century diasporic poetic form as well as a first poetry book, Beyond Life Sentences, which received the Philippines’ National Book Award for Poetry. Translated into ten languages, she also has edited, co-edited or conceptualized 15 anthologies of poetry, fiction and essays. Her writing and editing works have received recognition through awards, grants and residencies. More information is available at http://eileenrtabios.com