CURSED AND OTHER STORIES by NOELLE Q. DE JESUS 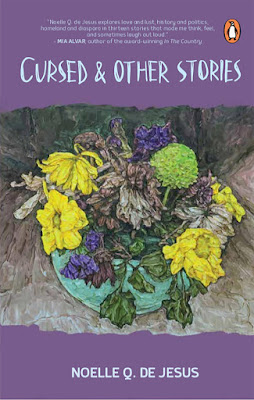 As may be expected from the title, the stories in Noelle Q. De Jesus’ CURSED AND OTHER STORIES are not feel-good stories. But due to her strong narrative skill, the stories linger in the reader’s memory—it’s that powerful effect which is a more appropriate standard (versus joy) by which they may be judged.

“Michael,” for example, should be required reading among those who will curate a body of literature fomented by Duterte’s reign (in the same way there is now a body of literature fomented by Marcos’ rule). Speaking (ill, as I’m wont to do) of politicians, “Real People” reminds me of that story of a politician’s staff throwing trash in the Pasig river so that they then can film the politician doing admirable clean-up—a reference I’m also moved to raise because De Jesus’ stories effectively  remind of the deceptiveness of surface, that motivations are not always obvious.

In one of the book’s strongest stories, the charisma of “Small Sacrifice” pulls in the reader slyly until its experience lingers long after its last word. The story has a deft structure of presenting three points of views on what seemingly is a story’s small scale: a Filipina OFW helping to care for a retired priest in the priest’s sister’s house in Ireland. It’s a story that must be read more than once to best understand the losses within its tale. (It’s also a reminder that we Filipinos often do not witness the extent of the sufferings undergone by those OFWs who support our families—and that perhaps we don’t want to as well as that our OFW relative may not want to reveal all of their experiences as someone in a fragile position in a foreign land.)

De Jesus is strong in narrative—she does not shirk at all in fleshing out concepts, she is thorough in descriptions. There can be the occasional spot where more line editing could have been helpful for tightening. But there are always the requisite twists to make these stories good yarns. Moreover, many of the stories are uplifted by particularly strong endings. “Names of Flowers,” for example, pleases for not being predictable—that is, it ends up not being so much about lesbianism but the link to flowers.

I understand De Jesus is working on a long novel. I could speculate on how a story or two in this collection might be constrained by the frame of a short story, which only makes me look forward to how she could blossom in the long form. For example, “Dreams in English” certainly works as a stand-alone short story, but it also offers the sense of being a chapter in a larger work. Ultimately, CURSED AND OTHER STORIES reveals its effectiveness by making the reader look forward to more from its author. These stories are a wonderful addition to literature that painstakingly explores both the frailty but also adaptability of the human psyche.