PLAY FOR TIME by PAULA MENDOZA

Four poems into the book, I arrogantly imagine I know what Paula Mendoza did to create the poems in her lush and charismatic debut, PLAY FOR TIME. She loosened all of the words from the pages of the fattest English dictionary that she could find, tossed the words up in the air, and let the words fall around her in a disorganized heap.  She then plucked-to-choose and combined words at random. “I took it apart. // When it was whole, / it wasn’t right,” she writes in (for my context) the slyly-titled “Engineer.” Here’s an example of the results from “Spell”:

“chortle your knockwurst and slut it for the creamdom”

I chose that line for displaying how—and despite any truth in what I fictionalized as her strategy—the result becomes whole through music. It also displays one of her strengths: slightly adjusting words so that they seem to be averted presentations of other words, which is to say, allusions to something not so easy to discern, e.g., for me to read “creamdom” is to be reminded of “kingdom” and it is a harsh truth throughout human history that many have had to slut it for kingdoms….

This is also to say—and I notice this apt and admirable tendency in many poets of color—the poem doesn’t just rely on musical abstraction: We have things to say! “Dehelixing Adora: At the Tip of His Tongue,” for instance, can be interpreted to touch on misogyny (I could do a close read but just note the title already), “Left By the Ship” can touch on the impossibility of certain longings in the diaspora, and so on.

What makes this poetry stellar is how Mendoza’s rigorous diction leads to fresh ways of saying those things-said-before-but-not-often-heard, and this is even before she disrupts English with non-English. In many poems, phrases contain hauntings of how things used to be said: “I’m goring for the kill” (from the poem with its scalpel-honed title, “My Demon is Sad All It Can Be Is Complicit”) could be “I’m going (in) for the kill” but Mendoza’s phrasing is less normative and slack, thus pause-inducing for the reader to consider what the poem is presenting; “goring,” obviously, is also more powerful and energetic than “going” and poetry’s shoulds, should they exist, certainly should include said power and energy. Here’s “Lucy” which I feature below as a good example of Mendoza’s intriguing and bracing word choices:
[click on images to enlarge] 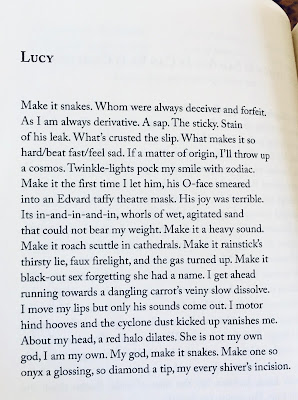 In addition to subverting the to-be-expected diction, Mendoza also presents parallel universes (or alternative meanings) simmering between her lines. To paraphrase one of her poems’ titles, it’s as if the poems also are “scene rewrites” attendant with second-guessing and perspectival mental shifts: 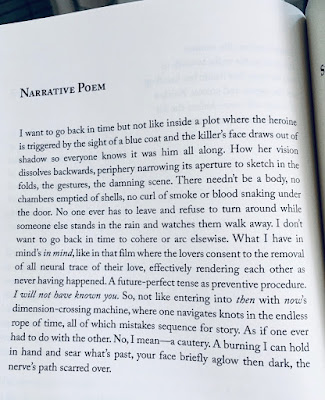 As well, the lushness of the language is a success.  It makes me consider how she understood language’s rules before she tinkered with them … so that she ended up never losing sight of Beauty which, like Poetry, somehow always fends off others’ subversions. These poems are not just gems—they’re gorgeous. This example might be (one of her) ars poetica: 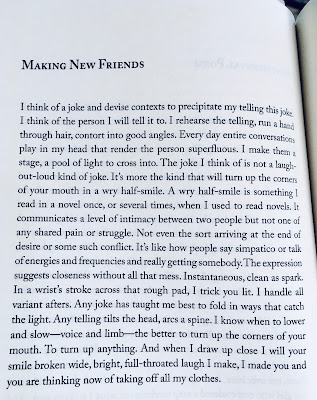 We are
headed towards, the last word
always
the first, again. Again

such that I, the reviewer, return, too, to the first words of this review. Note the title: Play For Time. I said at the top of this review, “She loosened all of the words from the pages of the fattest English dictionary that she could find, tossed the words up in the air, and let the words fall around her in a disorganized heap.  She then plucked-to-choose and combined words at random”—that’s “play.” But on a deeper level, in Filipino (and other) indigenous cultures, time can collapse into a moment without borders, where the past and future do not exist as all is present: thus, a sentence does not (linearly) unfold but is simply one word that is all words. In such indigenous time, all is interconnected not just across all beings but across all of time. In a novel I’ve recently finished, I call this concept “Kapwa-time” as Kapwa is a Filipino indigenous trait that shares connections among all. It seems to me that Mendoza looked at language and her subjectivity as a Filipina-Canadian who considers herself an “Austinite” and considered (as she put it in “Scene Rewrite”)

Is the language doing it for you?

Entonces (yes, the indigenous Word encompasses all language, thus the insertion of non-English in an English review), Mendoza did not just structure a play (as in a theater production). She also made a verb-bid to, literally, play for time that among other things erases/dilutes diasporic longing. Indubitably and ineffably, the result is Poetry.