PATRON SAINTS OF NOTHING by RANDY RIBAY (1) 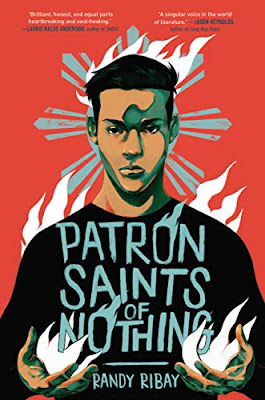 Patron Saints of Nothing by Randy Ribay
(Stripes Publishing Limited, 2019)

The night I picked up Randy Ribay’s Patron Saints of Nothing, I had partially read his speech “Critical Lit Theory as Preparation for the World” given at the ALAN (Assembly on Literature for Adolescents of the NCTE) Workshop in November 2019. In this speech, Ribay discussed using critical literary theory as a method to “contextualize the reason we study stories and literature” and highlighted that feminism, postcolonialism, and Marxism were foundational to present counternarratives. I stopped reading his speech because elements of the book were being revealed, so I picked up my copy of the book and started reading.

That first night, I read the first 28 or so pages. Within those pages, I took note of the coverage and depth that Ribay was already mentioning through the story’s main character, Jay. My notes included the following:
·      Like any high schooler
·      Filipinx masculinity
·      LGBTQ brother
·      Perceived education – university
·      Real education – learning about Philippine politics and uncovering more about Jun’s death
·      Coming of age – becoming of identity
·      Stereotypes and narrative coerced upon us (hegemony) to conform and survive in America
·      Learning to navigate mental health and feelings
·      The letter writing – yellow legal pads, smell of ink
o   Emotional & physical distance between Filipino & Filipino American cousins - diaspora
·      Introduction & privilege & crime of drugs

Considering that this book was written toward teenagers and that these themes and concepts were within the opening pages and chapters, Ribay’s willingness to address the vast factors that impact Filipina/o/x American identity shows a courage to be bold in his work and unafraid to address historically stigmatized topics in the Filipino and FilAm community.

While Ribay took a look at his work through critical literary theory at his November 2019 talk, I would like to offer a new lens of viewing the book through an Ethnic Studies framework. At Dr. Allyson Tintiangco-Cubales’ TFCU Talks presentation, “Ethnic Studies: Saving Lives, Sacred Spaces, and Solidarity,” she shared a quote from the late Dr. Dawn Mabalon that said Ethnic Studies helps us answer three questions:
1.     Who am I?
2.     What is the story of my family and community?
3.     What can I do to make positive change and bring social justice to my community and the world?

In Randy Ribay’s Patron Saints of Nothing, Jay goes on his own Ethnic Studies journey as his world is turned upside down when his closest cousin, Jun, who lives in the Philippines, is murdered during President Duterte’s war on drugs. As Jay questions his purpose and how he is living in the world as a privileged and no worries teenager, he begins to ask his family members questions to learn more about their history, and he hopes to make a positive and hopeful change at different moments while he is in the Philippines.

While Jay’s point of view is the central focus of the novel, the women around Jay keep him anchored throughout the book. In the Philippines, Angel, Jun’s youngest sister, give subtle hints to Jay to help him navigate around the home without hopefully getting caught. Grace, Jun’s eldest sister, becomes an ally in Jay’s quest to learn more about what happened to his cousin and her brother. Mia, a Filipina he meets through Grace, also allies with Jay to provide guidance and sociopolitical context in understanding the circumstances of Jun’s death. Jay’s interactions and stay with Tita Chato and Tita Ines acts as a reprieve from the seriousness he continually encounters on his journey of learning more about Jun’s life outside of his cousin’s letters to him. One of my favorite moments from the book is a karaoke session with his Titas and reminded me of the singing talents one has when they’re asked to sing karaoke in the Philippines. Ribay creates a story where the intense mystery of a cousin’s death and the seriousness of the war on drugs in the Philippines is also paralleled with moments of joy, laughter, and being present in all the dark and light moments.

One aspect of the book that was subtle and hinted at, but not apparent, was the access Jay and his family members have to socioeconomic privileges. From having several technological devices such as video games, a cell phone, and a computer available at home in Michigan to Jay’s dad easily being able to buy a last minute ticket for his son to the Philippines to having access and prepaid load on a SIM card for his cell phone to have connection in the Philippines to Tomas, the driver, and María, the maid, at Tito Maning’s house, the Reguero Family in the United States and the Philippines has money. Ribay contrasts the Reguero Family’s privilege by describing the conditions of the working class and low-income neighborhoods and houses in the Philippines. While this was not at the forefront of Jay’s journey, the privilege and access that Jay has at his disposal to learn more about his cousin’s death and family history also comes at a financial cost that he does not have to work or struggle for.

There’s something about letters going on in Filipina/o/x American Literature. While the earliest history of including letters in FilAm Lit can be traced back to the seminal work of Carlos Bulosan’s America Is in the Heart, there seems to be an emergence of the form and approach of letter writing. From E.J. R. David’s We Have Not Stopped Trembling Yet and Barbara Jane Reyes’ Letter to a Young Brown Girl, Ribay joins these scholars and writers and uses letter writing as a way to bridge the narratives and worlds of Filipina/o/x Americans. I do wonder though: why does Ribay choose letter writing as a form of communication between the cousins? How does this communication with “old school” ways of documenting our lives enrichen the narrative and the mystery of Jun’s death? I’m not quite sure the answers to those questions, but the way Ribay places the letters between Jay and Jun throughout the book gives the reader a chance to slow down and understand the cousins’ history and relationship inside and outside of their correspondence. The value in the letters, the words of the deceased, and holding onto something that was handwritten from someone you love holds a different kind of sentiment, emotional power, and history to those closest to us.

Randy Ribay’s Patron Saints of Nothing is a chance for Jay to return home and find home. At different points throughout the novel, Jay adds another layer of understanding who he is and who he wants to become. By trying to find out what happened to his cousin, Jay also gets to build an identity that is rooted in and informed by family history, struggle, and experience.

Von Torres is a full-time and recently tenured professor in the English and Reading Department at Clovis Community College in Fresno, California. He became a student of poetry at Fresno City College and transferred to San Francisco State University where he earned his B.A. and M.A. in English: Creative Writing. His poetry has appeared in TAYO Literary Magazine and VERSES TYPHOON YOLANDA: A Storm of Filipino Poets. He has also self-published two chapbooks: HELLO my name is and "F" Sounds.