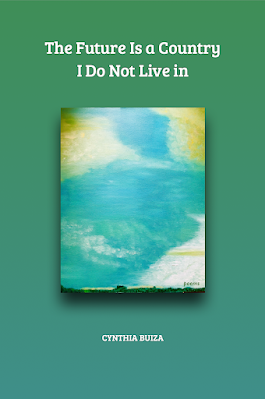 There is a certain type of poetry book that’s exemplified by Cynthia Buiza’s The Future Is a Country I Do Not Live In. It’s a book that’s the poet’s first book while hinting at the possibility that it may be her last. Of course we hope that Buiza creates more books, but this evoked possibility relates to how there was no shortcut in time for releasing this first collection. The poet first had to live life over a prolonged period, to be sure writing individual poems along the way but not releasing a book until sufficient time and experiences have occurred. This book required intellectual and emotional marination.

As a result of the process’ duration, each poem becomes imbued with a hard-earned wisdom, making each (seemingly) effortless with its revelations. Each poem hearkens some not-always articulated but deep knowledge. The approach results in an achievement that’s increasingly rare in this age of social-media instant gratification.

“When Will There Be Good News?”—is one of its powerful poems—a power magnified by not only intelligence, but mature understanding of the world Buiza has observed and experienced: 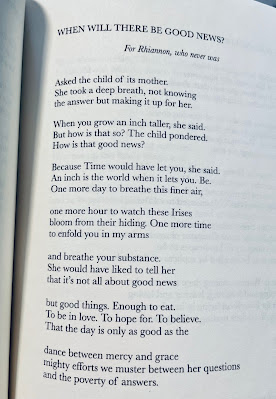 The third stanza in “When Will There Be Good News?”—a conversation between a child and mother—might not have been possible without the poet’s lived experience. The line “An inch is the world when it lets you. Be” becomes more powerful and poignant when it transcends a particular life to be contextualized against the ways of suffering that exists in our world, sufferings that Buiza knows through her life as an immigrant and refugee rights advocate. Here we see how a poet looks at an inherited world, transforms it for the better, then transforms it again through poems. As a reader, I’m grateful.

Last but not least, I should note the book’s title poem—that I don’t show it here so that readers hopefully will get this book to see it. The title poem is worthy enough to be reproduced in a multitude of anthologies. I share one line that’s clearly hard-earned through the poet’s experience:

“A poet said the quiet is grief’s appetite.”

The line evokes a moment of contemplation that is part of writing a poem. It’s unfortunate that it’s a reminder, too, of a suffering world. But I am grateful to the poet for doing what was required to articulate these fine poems. The rigor did not come easily, but we can only be grateful it resulted in poems luminous despite their dark roots—a result that can be considered Grace.

Eileen R. Tabios has released over 60 collections of poetry, fiction, essays, and experimental biographies from publishers in 10 countries and cyberspace. Forthcoming in 2023 is the poetry collection Because I Love You, I Become War. Recent books include a first novel DoveLion: A Fairy Tale for Our Times; two French books, PRISES (Double Take) (trans. Fanny Garin) and La Vie erotique de l’art (trans. Samuel Rochery); and a book-length essay Kapwa’s Novels. Her award-winning body of work includes invention of the hay(na)ku, a 21st century diasporic poetic form; the MDR Poetry Generator that can create poems totaling theoretical infinity; and the “Flooid” poetry form that’s rooted in a good deed. Translated into 12 languages, she also has edited, co-edited or conceptualized 15 anthologies of poetry, fiction and essays. Her writing and editing works have received recognition through awards, grants and residencies. More information is at http://eileenrtabios.com