In the late 1990s, I was honored and blessed to be introduced by poet Luis Cabalquinto to Venancio "VC" Igarta, the foremost artist of the Manong Generation. As a result, I came to spend meaningful time with Igarta, including when he painted my portrait. Here we are in his studio in Chinatown (New York) at about 1998: 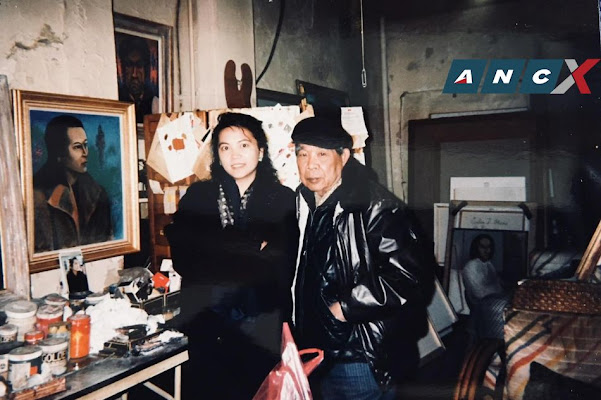 Igarta is currently in the news as four of his works will be part of the Leon Gallery's Manila auction of "The Kingly Treasures." The works come from the collection of Philippine feminist and diplomat Letty Ramos-Shahani, and include one of the best paintings I've seen Igarta make: "Woman and Abstract Painting" (oil on canvas, 36" x 36", 1992). The other works are available at the Leon Gallery link, but I focus on this painting, not only because it's gorgeous but because it hearkens my most amusing encounter with Igarta. It's also useful to see a recent article on Igarta by ABS-CBN entitled "The elusive Venancio Igarta, once called ‘the only Filipino artist worth meeting in New York’." 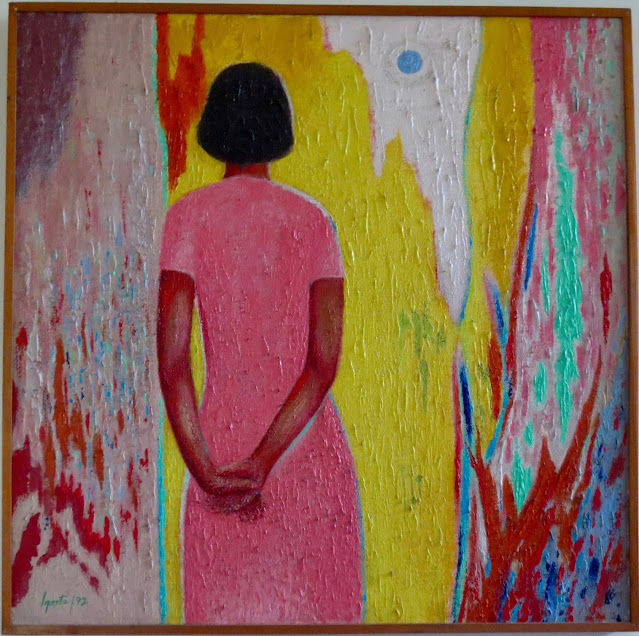 One of my most meaningful encounters related to Igarta's views on another artist I much admire, Clyfford Still. I so admire this leading Abstract Expressionist painter that I once wrote a series of poems on many of his paintings (these poems are in my books I TAKE THEE, ENGLISH, FOR MY BELOVED and THE THORN ROSARY, among other places). Without Igarta, these poems would not exist because they were written as a result of perusing through the monograph, Clyfford Still by John P. O'Neill (Metropolitan Museum of Art / H.N. Abrams, 1979): 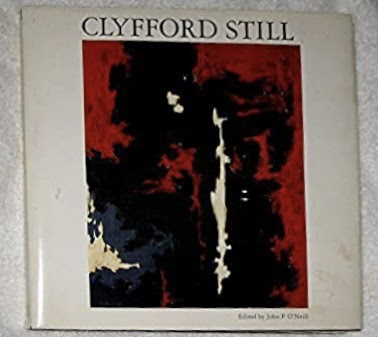 I had seen the book in Igarta's studio, exclaimed my delight, and picked it up to start flipping through its images as I enthusiastically praised this innovative artist. I went on and on, not noticing how Igarta looked increasingly disgusted at my enthusiasm. Finally, he said, "Take that book out of here. I don't like his works that much!"

If I was surprised at his reaction, I didn't think much about it since I focused instead on being able to bring home a thick book on one of my most admired artists. It was only later that I thought about Igarta's response, questioning whether he really detested Still's paintings. Candidly, I wondered whether Igarta was feeling jealous over my admiration of another artist.

Recently, I returned to this memory after scholar Vicente Rafael showed me an image of "Women and Abstract Painting." I was delighted! To my eyes, this proved that Igarta actually appreciated Still because the "field" of the painting being seen by the woman certainly showed Still's inspiration. It's still Igarta--especially his color choices which he'd once described as tropical for evoking the Philippine landscape in his mind. Still's color diction, as shown on the above cover of his book, are usually less bright and offer a different mood (click HERE for some Clyfford Still images). But the interest in verticality and thickened surfaces are shared.

In an ideal world, I would bring "Women and Abstract Painting" home to hang on my walls for combining the inspiration of two of my favorite artists. Whoever ends up with that painting through Leon Gallery's auction will be blessed.

Here is one of the ekphrastic poems I wrote after a Clyfford Still painting, whose image was given as a gift by Venancio Igarta. The poems in my Clyfford Still series feature poems whose lines were written to approximate my perception of the vertical lengths of Still's brushstrokes:

Some dreams you don’t want to end, like my only one from last week where I found myself crossing the street to be missed barely by a colossal truck crashing into a lamppost, its back bursting open to unload white roses—flung up high like the first gush of a Roman fountain—before dispersing into slowly floating petals—taking their time—descending as if gravity had decided to be a benign father and loosened its hold—

which, being nearby and having just been scared witless only to see a painting bloom against the dirty canvas of air that could be titled “Ecstasy No. 1”—this same point being able to be made had I just opened a door to be stunned by a grinning crowd yelling “Surprise!” before showering me with a cake lit by candles, balloons and boxed presents in fine layers of pastel paper—made me put down my briefcase

to begin dancing, twirling round and round on the street, my hair falling from its bun and blouse lifting itself out of my tight waistband as I twirled with my face toward the sun and palms lifted toward the sky to feel the soft

—oh, so soft they made me recall the blue-veined flesh just beneath your tired, tired eyes!—

petals raining down, down, down—so marvelous I probably would not have cared if they’d been radioactive—

except that surprises are rarely totally benign

so that I preferred the dizziness—perhaps I even began to pray I would faint for the blessed relief of unconsciousness—over the end of a dance—this same point being able to be made about the end of a kiss, a wedding, an opera, a first date, the painting of a painting—

for I am not unusual, perhaps, in living only in moments rather than through the seamless progression of time

and I have come to wonder whether I should end my desires to try so hard—to, as my precocious nephew once counseled me, “Just go Zen, Baby!”—

so that I also will know joy as unsolicited

something like Glenn Gould turning his back on the world so that his music would participate in evolution, something like the fragile violet feeling a chill but still slipping its way out between a crack in ice stubbornly sheething the ground,

something like you and I managing to keep our secret, secret

Eileen R. Tabios has released over 60 collections of poetry, fiction, essays, and experimental biographies from publishers in 10 countries and cyberspace. Forthcoming in 2023 is the poetry collection Because I Love You, I Become War. Recent books include a first novel DoveLion: A Fairy Tale for Our Times; two French books, PRISES (Double Take) (trans. Fanny Garin) and La Vie erotique de l’art (trans. Samuel Rochery); and a book-length essay Kapwa’s Novels. Her award-winning body of work includes invention of the hay(na)ku, a 21st century diasporic poetic form; the MDR Poetry Generator that can create poems totaling theoretical infinity; and the “Flooid” poetry form that’s rooted in a good deed. Translated into 12 languages, she also has edited, co-edited or conceptualized 15 anthologies of poetry, fiction and essays. Her writing and editing works have received recognition through awards, grants and residencies. More information is at http://eileenrtabios.com