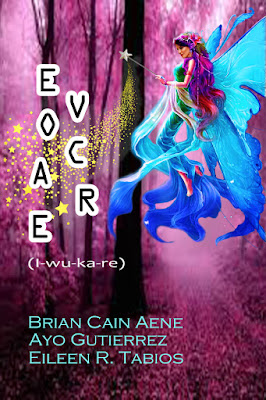 BOOK LINK
Evocare from its Latin meaning “to summon”, brings together the work of three poets in this collection of tanka or “short songs” – a genre of classical Japanese poetry that was traditionally written as a single, unbroken line of 31 syllables but has since been cast in five lines of 5,7,5,7 and 7 syllables using simile, metaphor and personification. Like the sonnet, it employs a turn, a pivotal image, which marks the transition from the examination of an image to the examination of the personal response. This transition is located in the third line connecting the upper poem to the lower poem [Poets.org / tanka: glossary of poetic terms].
Ayo Gutierrez’s tankas read like a series of statements or proverbs. They are lessons from life. Her concern is with the whole of nature, both human and animal, (many different animals are mentioned in this collection), and how we can be enriched by it if we only learn to heed its wisdom.
In keeping with the tanka tradition, her third lines, the pivot points, are full of observation drawn from experience.  Here is a selection of them taken from different tankas: To love means to give; Freedom is scary; Be careful in life; Adaptation is art; Take no life for fun; Alone means weaker and Am I forever?
Gutierrez does not shirk from spelling out the realities of life:
When two rivers meet
They become one big river
The smaller ones dies
Just the widest of the two
Allowed to retain its name.

She places her faith in the way that Nature keeps everything in balance:

Nature is balance
Between birth and death of all
Demand and supply
Too much birth brings extinction
Too much death makes life grow strong.

and she expresses herself through the use of contrast and balance to help us to understand and adapt to the changing circumstances of life. In a recent interview (Spotlight on Writers / Spillwords Press, July 13, 2019) Gutierrez, born in Makati City, Philippines, and currently living in Cebu City, reveals that she has always had an affinity with nature after trips with her parents to Tagaytay to take a break from the hustle and bustle of city life. Her love of the natural world is revealed in these tankas where each one is a scenic piece that says so much in a short space about universal truths.

The collection of tankas by Eileen R. Tabios is divided into twelve sections. Most, if not all of them, are drawn from her previous publications but taken together they showcase the way in which she has developed and experimented with the form. Also included is a short poetry-in-progress essay on the ethical dilemmas of writing poems based on someone else’s first hand experiences of war.

In this collection Tabios utilises a variety of styles to fit her poetic purposes. There are single stanza tankas (My First Three Tankas); tanka chains or sequences (Maple Leaf Tanka); tankas written around a common theme (Tanka for Chef Tom, The Great Grief and Emergency Room Tankas); tankas written in a shorter format to pay homage to the original Japanese form (Excavated Tankas) and tankas split into two stanzas that reflect another (older) form of the genre, the latter presented in a combination of line repetitions affording multiple permutations.

Variety of style is matched by variety of mood and subject matter. The three examples that follow illustrate by turn the unashamedly romantic side of this poet and the political activist side with hard-hitting lines addressing topics of concern in America today: everything from gun violence to the state of the American healthcare system:

from My First Three Tankas:

Last night white jasmine
Slipped through the open windows
perfume forms image
You by the open door, smiling
After two years without you

“If only bullets
Could create peace, not make wars”
A schoolchild once hoped

This fantasy pays homage
To the students as they march.

“Urgent Care” differs
From “Emergency.” I ask
What’s the difference
Thousands of dollars, the nurse
Says, It’s about insurance

Tabios’s ability to speak out on contemporary issues using this traditional form of poetry is one of her strong points. Her endless quest for invention is behind everything that she writes.

A selection of tankas by Brian Cain Aene, a Filipino martial arts enthusiast who works in marketing, rounds off this collection. Aene structures his contribution through a series of exhibits. Exhibits 1 to 11 are inspired by people he encounters and the stories he creates. Exhibits 12 to 18 are, in his own words, ‘meant for the reason behind my wings, the reason why I discover many great things…for my Favourite Person, the west wind in the east.’

The 200 tankas that make up these exhibits are all titled as portraits. Each of these portraits presents us with a vivid description in words that collectively form a public presentation or manifestation of a particular theme which often takes the form of a depiction of a relationship with a loved one. Most are highly personal in nature (first and second personal pronouns are often in evidence) but some offer up a more universal theme. These two tankas, the first intimate and the second spelling out a truth gleaned by experience serve as examples of his work:

Exploring the curves
Of your body with my lips –
A secret voyage;
Sliding my fingertips on
Your skin – my kind of playtime

Exhibit 15: Letters to the Wind

The greatest lesson
Love can teach in a lifetime
Is making days count,
As if each is a last day –
This we know when days are gone

Taken together, all three contributors have much to say about love, life and contemporary issues which concern us all and they say it with eloquence within the strictures of this compressed form. Small is indeed beautiful.