The Halo-Halo Review is pleased to interview authors in the aftermath of a book’s release. This issue’s featured writers include Luisa A. Igloria. 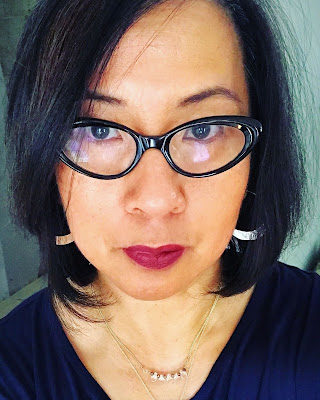 What is your most recent book?
The Buddha Wonders if She is Having a Mid-Life Crisis (Phoenicia Publishing, Montreal; 2018).

A book trailer by Marc Neys (Swoon) is available HERE. 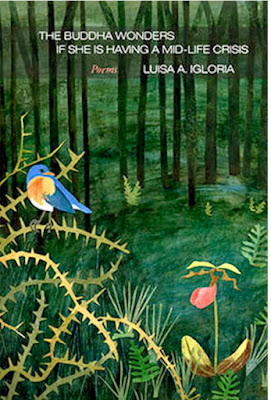 What has been the response/what has surprised you about the response?
I remember reading from these poems at several venues over the past two years. In all of these, the response was overwhelmingly the same: one, people loved them so much they came up to ask to buy the book, when it wasn't even a book yet; two, they said they loved how the idea of the Buddha (whose story is the search for release from suffering) is embodied in so many ways and through multiple personae; lastly, finding the humor in them-- even in poems that also bring up some pretty serious subjects: parenting, mid-life, discrimination, political, existential, and environmental concerns.

Tell me something not obvious or known about the book.
Here's a fun fact: the book cover design is the work of my wonderful publisher Elizabeth Adams (Phoenicia Publishing, Montreal). She is herself a beautiful writer and talented artist. She hand-cut all the collage elements a la Matisse, then painted the background.

Then, looking back, the impulse to write poems like these has probably been with me for some time now, especially hearing, for instance, at the end of a yoga class-- "The Buddha in me greets the Buddha in you," or some variation thereof.

There's a joke I learned in 2011 from ordained Buddhist teacher Rev. Kaspalita Thompson, who runs the Pureland Buddhist temple in Malvern, Worcestershire:

"Why can’t the Buddha vacuum underneath the sofa? Because he has no attachments."

This joke led to my writing an early "Buddha" poem called "Ghazal of theTranscendental," in which the speaker asks, in couplets 2-4:

"...The Buddha teaches that we want to work free of delusion and suffering
in order to ascend, like the wren in the lilac, full-throated, singing.

I don’t know too many intimate details about his life but I do know
the Buddha was not a woman doing chores all day, much less singing.

Suffering is a pain in the ass, in the neck, in the heart mostly; since I
suffer knowing my children’s hurts, will I never know that lithe, joyous singing?"

Another Buddhist teacher said that I missed the point entirely: I am the Buddha, "there is no Buddha out there," but "Buddha dwells within [me] this very moment."  My response was: if that is so, then the Buddha in me is also responsible for writing these poems. Rev. Kaspa seemed to agree, saying the poems show "... the humanity of ordinary humans, [so] my Buddha [is] human too, as well as something else."

The poems in this book don't seek to raise theological arguments. I love the way Ira Sukrungruang puts it in his Foreword: "[The Buddha] can be transcendent, gold and without flaw. I might find him in a baseball cap and ripped jeans and a T-shirt. Or he can look like my mother and all I want to do is curl into him when I am despondent. He can be anywhere. ...S/he is the voice we’ve locked inside. S/he is comprised of mythology, tradition, and imagination. Here the Buddha sits in a turbulent plane. Here s/he writes an advice column. Here s/he is the wallflower at a party overhearing a story about pot brownies."

Writing the poems in The Buddha Wonders if She is Having a Mid-Life Crisis just made me think of all the ordinary things that we do on a daily basis, and how they suddenly, weirdly, acquire almost epic significance when viewed in the context of the very human quest to transcend and be more/be better at living, without harming ourselves or others.

What are you working on now?
I'm currently in the process of revising a new full-length manuscript of poems on motherhood and mortality. And starting to write what I hope will become a book of (creative nonfiction) essays. And I still write at least a poem a day.

Luisa A. Igloria is the winner of the 2015 Resurgence Prize (UK), the world’s first major award for ecopoetry, selected by former UK poet laureate Sir Andrew Motion, Alice Oswald, and Jo Shapcott. She is the author of the full length works  The Buddha Wonders if She is Having a Mid-Life Crisis (Phoenicia Publishing, Montreal, 2018),  Ode to the Heart Smaller than a Pencil Eraser (selected by Mark Doty for the 2014 May Swenson Prize, Utah State University Press), Night Willow (Phoenicia Publishing, Montreal, 2014), The Saints of Streets(University of Santo Tomas Publishing House, 2013), Juan Luna’s Revolver (2009 Ernest Sandeen Prize, University of Notre Dame Press), and nine other books. She is the author of the chapbooks Haori (Tea & Tattered Pages Press, 2017), Check & Balance (Moria Press/Locofo Chaps, 2017), and Bright as Mirrors Left in the Grass (Kudzu House Press eChapbook selection for Spring 2015). Luisa teaches on the faculty of the MFA Creative Writing Program at Old Dominion University, which she directed from 2009-2015. In 2018, she was the inaugural Glasgow Distinguished Writer in Residence at Washington and Lee University.  www.luisaigloria.com